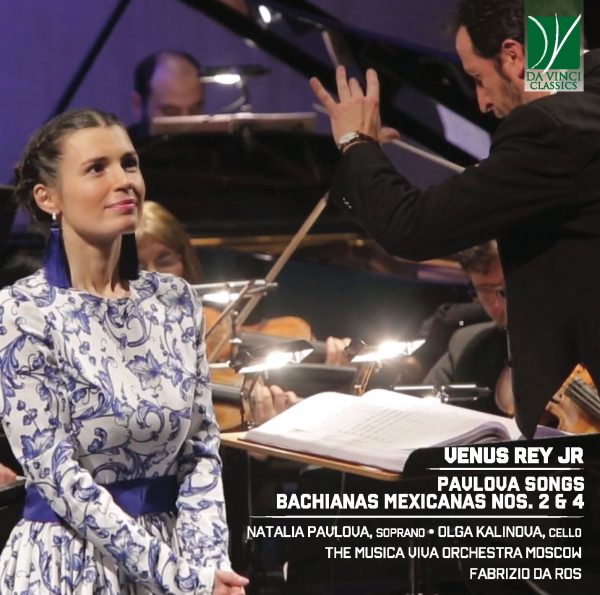 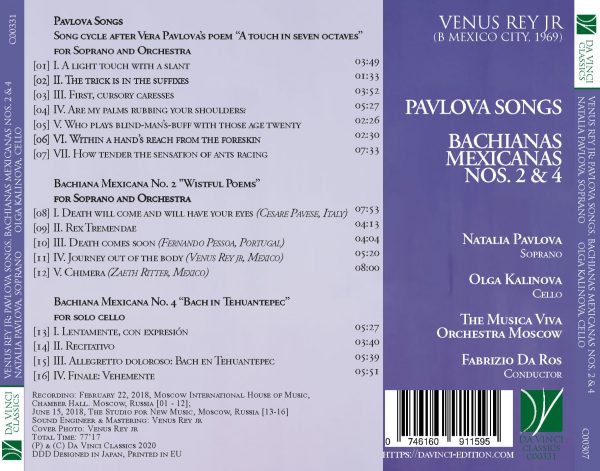 Pavlova Songs
Pavlova Songs is a song cycle composed by Venus Rey Jr after the poem A touch in seven octaves, by Russian writer Vera Pavlova. In September 2016 Natalia sang a program of Rey’s music in Venice. In that concert, the Orchestra di Padova e del Veneto performed Rey’s Bachianas 1, 2 and 3. Natalia and the composer have been close friends ever since. Natalia’s mother, Vera Pavlova, is one of the leading poets in Russia, with some twenty books published and her work translated into several languages. The idea of working with Vera’s poems emerged. Vera suggested a set of seven poems: One touch in seven octaves. These are erotic poems, both subtle and explicit. It is the voice of a woman expressing and singing her desire towards the man she loves. A key concept is the caress and Vera expresses it through fantastic metaphors: caresses that are like a first-grader handwriting (No.1); caresses that make the loved one faint and disappear into nothingness (No. 2); caresses that are like a bow over the strings of an ethereal instrument which is the body of the loved one (No. 3); caresses that make the body light, chiseled and compact (No. 4); love itself playing the blind-man’s-buff and the hide-and-seek game with lovers (No. 5); the nature of touching –touching the sex of the beloved– as the key to release the mystery of a metaphysical disembodiment (No. 6); and finally the sensation of ants racing all over the body and the lover propelled into ecstasy (No. 7). Pavlova Songs is sung in Russian. It was first performed at the Moscow International House of Music on February 22, 2018. Natalia Pavlova was the soprano soloist. Fabrizio Da Ros conducted the Orchestra Musica Viva Moscow. The song cycle is scored for three parts of violins, two parts of violas, two parts of cellos, double bass, piano, timpani, percussion, flute, bassoon, horn and soprano soloist. It was written during the Fall of 2017.

Bachiana Mexicana No. 2
Music lovers around the World are acquainted with Heitor Villa-Lobos’ Bachianas Brasileiras. Inspired by this model, Venus Rey Jr is currently writing a series of Bachianas Mexicanas –seven written so far. They are Bachianas because Rey Jr uses elements of baroque music. And they are Mexicanas because elements of Mexican art and culture are always present. Bachiana Mexicana No. 2 “Wistful Poems” was written in memory of the late Zaeth Ritter, a very close friend of the composer. Zaeth Ritter was a very gifted conductor. Venus Rey Jr was in shock when he knew about Zaeth’s death, and so he decided to write a work for her. This work had to be a deep meditation about death and the meaning of life.
The composer uses five poetical texts: Verrà la morte e avrà i tuoi occhi (Death shall come and shall have your eyes), by Italian poet Cesare Pavese; Rex Tremendæ, a liturgical text form the Latin Requiem Mass; A morte chega cedo (Death arrives soon), by Portuguese poet Fernando Pessoa; Viaje fuera del cuerpo (A journey out of the body), by Venus Rey Jr; and Quimera (Chimera), by Zaeth Ritter. The fourth movement is particularly interesting, because the composer used two very well known preludes by Johan Sebastian Bach and constructed the music upon them: the C minor prelude for beginners and the opening prelude in C of Book I of The Well Tempered Clavier. This Bachiana is scored for flute, horn, bassoon, percussions, timpani, piano, soprano soloist, three parts of violins, two parts of violas, two parts of cellos and double bass. It was composed between November 2015 and January 2016.

Bachiana Mexicana No. 4
This work was written in the Summer of 2017. It was born out of an artistic collaboration between the American visual artist Jeannette Betancourt and Venus Rey Jr. The first movement (Slowly, with expression) has a Beethovenian drive which reminds us the piano sonata opus 111. The second movement is a very emotional recitativo. The third movement (Allegretto doloroso) is built upon a stylized Oaxacan melody and four variations (Oaxaca is a region in Southeast Mexico): the first one in quavers, the second one in triplets, the third one in semiquavers and the final variation in the lower register of the instrument. The Finale is a bravura musical piece with an unusual meter: 10/8. The temperament of this final movement has a strong Latin accent.

Olga Kalinova: Began playing cello at an early age and graduated with honors at the Moscow Conservatory. She has won several competitions in her native country and abroad. Since 2005, Kalinova is a member of the Studio for New Music Quartet, which constantly performs World premiers of contemporary composers and appears throughout the year in music festival such as “The Moscow Autumn”, “The Moscow Forum of Contemporary Music”, “The Warsaw Autumn”, “The Souno Immagine Milano” and “The Istanbul Bach Festival”. Kalinova is a member of The Musica Viva Orchestra (Moscow) and principal of the cello section. She is founder of the Open Sound Orchestra in Moscow.

Vera Pavlova: She is a graduate of the Gnessin Academy where she specialized in History of Music. Since 1997, she has published twenty collections of poetry in her native Russia and has authored five opera librettos, along with lyrics to three cantatas. Pavlova’s works have been translated into twenty five languages.

Venustiano Reyes (Mexico) (nom de plume Venus Rey Jr)
He began composing at eleven, when he was still in elementary school. From 2000 on, he has committed himself to symphonic music. Among his compositions, Mass for Our Lady of Guadalupe, A Jesuit Symphony, Requiem and The Fifth of May Symphony, stand as important works of the contemporary Latin American symphonic and choral repertoire. His music has been performed in the United States, Russia, Germany, United Kingdom, Italy, Austria, Poland, Ukraine, Argentina, Peru and Mexico.