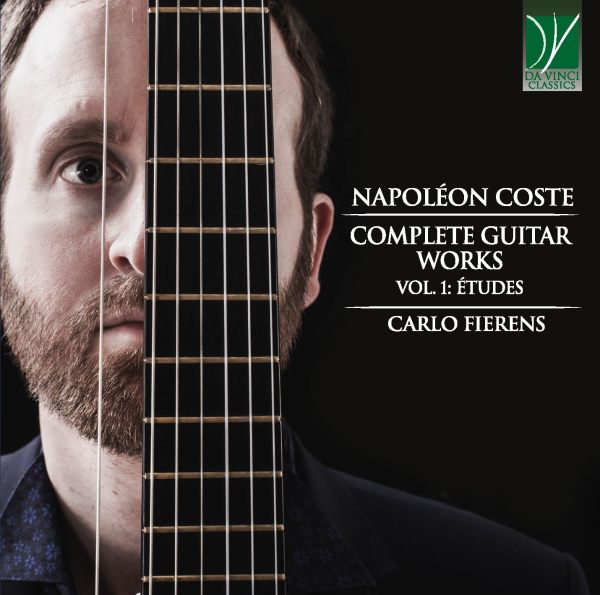 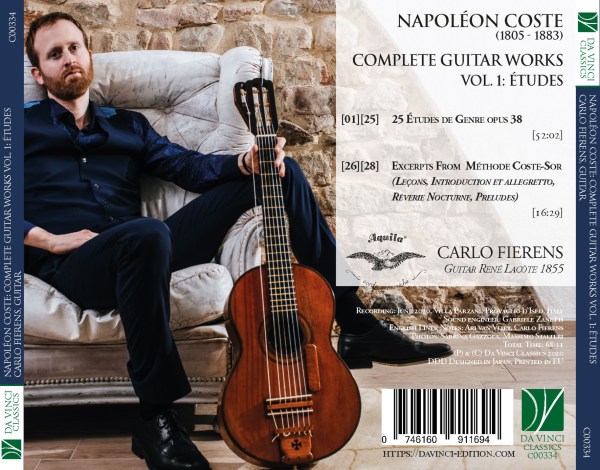 This first volume deals primarily with one of the most important musical heritage left by Coste: his Vingt Cinq Études de Genre opus 38. A handful of studies were among the few compositions of the French guitarist to be published, taught, and performed continuously after the composer’s death up until today. They are widely regarded not only as a valuable pedagogical tool and a technical compendium for the Romantic guitar, but also as one of Coste’s highest compositional achievements (for a history of the reception, see Ari van Vliet Napoléon Coste: composer and guitarist in the musical life of 19th-century Paris, VII Études de Genre). We can guess how Coste himself was well aware of the level reached by some of the numbers of the series, if we consider that he chose No. 14 as an exemplary piece for the guitar composition competition organized by Makaroff. This piece of information also tells us that the preparation of the set took Coste many years, since the first edition saw the light in the first years of the 1870s. Another clue that hints towards that conclusion is the re-usage of a previously composed piece as No. 14 (romantically dedicated “à ma femme”). The studies are very varied in form, length, technical difficulty, and topoi used, but certainly a huge debt to Coste’s famous master, Fernando Sor, is recognizable through the whole collection, sometimes very explicitly. One can also see a certain progressiveness with the increase of the numbers, although that aspect is not very consistent: it is interesting to notice that even though the études have (by definition) a pedagogical value, Coste seems often more preoccupied with exploration of musical ideas and processes rather than mere technical issues (but it is possible to find examples of the latter kind: No. 23 has always been used as a challenging tool to develop the right-hand thumb’s technique). In that sense, the last études are undoubtedly those with more developed musical ideas: one could mention No. 19, real compositional tour the force with its polyphonic writing, or No. 25 that in its variety challenges the idea itself of a “study” and becomes a delicate and refined concert piece. Napoléon Coste’s contribution to guitar pedagogy cannot be limited to his op. 38. In fact, a further tribute to his master Sor is his edition of the Méthode which – to be fair – is wholy different from the highly theoretical treatise written by the Catalan master, scraping off the deep and thorough insights but making it much more practical. In this recording, I decided to include the most interesting original compositions presented in the collection as Leçons (which Coste adds alongside a selection of studies and exercises by Sor himself), with a special focus on the added section dedicated to the heptacorde guitar. It should be noted that the Méthode was published by Coste in 1851 and therefore it precedes the Études op. 38. The morceaux here included are clearly less ambitious than those presented to the public nearly twenty years later, but they are equally important to us in order to determine Coste’s pedagogical style, molded after his master Sor. Despite Coste’s music being regularly performed on six-string guitars (and this practice is not to be condemned since it allowed the very survival of that music!), the importance of approaching his pieces on the proper instrument should not be underestimated. This proves to be particularly true for the very fine pieces of the Méthode explicitly dedicated to the heptacorde guitar (here tracks 31-35), which are very rarely performed to these days, also because they are only very poorly adaptable on a regular guitar (one should mention the Marche, No. 15, which requires the 7th string to be dropped to C). If we take the words of preface to the Méthode literally, we can understand how such an instrument can give this music all the subtleties that made Coste the recognizes virtuoso that he was: “la 7ème corde purra etre remplacée très imparfaitement par la 4ème corde”.

The music of Coste displays a wide spectrum of characteristics of the Romantic style. The theme and variation genre aside, Coste chooses to continue the composition with new musical ideas or varied repetition of these, which gives his works an episodic or rhapsodic character. Over time his compositions show more and more Romantic characteristics. There is a wave of periods with strong Romantic and light Romantic compositions. The latter have a more didactic or commercial purpose.
The importance of Romanticism in Coste’s music is reflected mostly in aspects of harmony, wherein complexity and intensity of texture are characteristic. His use of altered chords and dissonances can be related to that of Liszt, his harmonic progressions to those of Berlioz, his harmonic freedom to that of Chopin. His chromatic modulations, with or without common tone, are comparable to those of Schubert. In melody the figurations are most important, showing the aspect of virtuosity in his music. Without being an imitator, his texture can be related to the figuration and passages of Chopin, his practice of chromaticism with that of Schubert, his high level of playing technique to that of Liszt – all this connected to his great control of the instrument, with which he expands the limits of technical possibilities, based on the principles of Sor.
In musical expression, dynamics and articulation contribute to the emotion. Here external references can be made to the vocal portamento of Chopin and the arioso of Schubert. Few indications to exoticism are found, except perhaps influences from Spanish music that could be considered exotic. In the Romanticism of Coste story as well as folklore and the use of rests contribute to the narrative character of his music. Here, historicism plays a role in his programmatic works, which represent, just as with Berlioz, musical dramatics. For all these aspects, Coste can be placed at the centre of the musical developments appearing in Romantic music in Paris in the middle of the 19th century. True enough, in his own words, a modest composer for a modest instrument, in his masterpieces, Napoléon Coste has succeeded in elevating Romantic guitar music to a high level. Among the great three composers of Romantic guitar music, with Mertz and Zani de Ferranti, Coste can be considered as most important. Coste surpasses the other two in a musical way and knows how to express a multifaceted palette of Romantic elements in his music, which is further enhanced by his intensive harmonic writing. His work is versatile and varied, attractive to the listener, player, and analyst in both its broad lines and its details. From his early works on, which already show some boisterousness, a great development leading to his masterworks can be seen in the middle of the century, in which the Makaroff compositions play a major role. His approach towards virtuosity and complexity is of such a delicate and logical nature that his music attains a high technical level, never at the cost of performance. The musical expression, to which Coste gives his full attention, comes to maturity this way. In this study the Romanticism in his music becomes transparent, by way of analysis and defining criteria. These premises and results can be used as a starting point for research into the works of Zani and Mertz, to further demonstrate the importance of Coste for Romantic guitar music.

Described as “one of the most attractive and engaging artists of the guitar nowadays” (Ricardo Iznaola), Carlo Fierens was born in Finale Ligure, Italy. Active as performer, musicologist, and educator, he has distinguished himself in all these fields. As a performer, he has won numerous prizes in International competitions (most notably the Alirio Diaz competition in Rome, the Indianapolis Matinée Musicale Competition, and the National Prize for the Arts in Italy). He is leading concert activities that have brought him to perform in many countries through Europe, America, and Asia, and in prestigious venues such as the Kennedy Center in Washington, D.C.

His music has also been featured by broadcasting companies such as RAI (National Italian Television), National Public Radio of Armenia, National Polish Radio, and Radio Nacional Argentina. Sandro Cappelletto, music critic of the Italian newspaper “La Stampa”, selected him among the most promising musicians of the new generation, and wrote: “Fierens well captures contrasts, sudden changes of writing, returning a rich sound, now bitter, now sweet, in a phrase and a ‘breath’ of the time of execution already very aware.”

Carlo Fierens started the study of the guitar with his father Guillermo, an acclaimed international concertist. He later studied in Trento with Norma Lutzemberger while completing musicological studies in the University of Pavia. He carried on his education in the USA, achieving an Artist Diploma at the University of Denver with Ricardo Iznaola and Jonathan Leathwood, and at the Jacobs School of Music (Indiana University) under the tutelage of Ernesto Bitetti.

Napoléon Coste (b Amondans (Doubs), 27 June 1805; d Paris, 17 Feb 1883). French guitarist and composer. The son of an officer in the imperial army, Coste, according to tradition, at an early age learnt to play the guitar from his mother. In 1830 he moved to Paris, where his first guitar compositions were published that year. He became a pupil and friend of Fernando Sor – with whom he also appeared in concert – and seems to have been involved in the early-music revival instigated by Fétis. Coste suffered from the general decline in guitar interest in the 1830s and 40s, and although winning second prize in 1856 in a Brussels competition for guitar compositions organized by the Russian nobleman Nikolai Makaroff, for many years he maintained his work as a civil servant. He nevertheless persevered with teaching and composing throughout his life.

Coste composed primarily for guitar. He reissued several of Sor's compositions, including a revised edition (c1851) of his guitar method. Coste was also the first to make transcriptions for ‘modern’ guitar of music for baroque guitar written in tablature: several compositions by Robert de Visée (1686) are included both in the c1851 Méthode and in his later Le livre d'or du guitariste op.52. Coste's writing for guitar was influenced by Sor, but his style shows more Romantic characteristics both harmonically and in formal structure and in the use of descriptive titles and programmatic features. Coste wrote primarily for a guitar with an added seventh string, and is one of the most important guitar composers of the Romantic era.