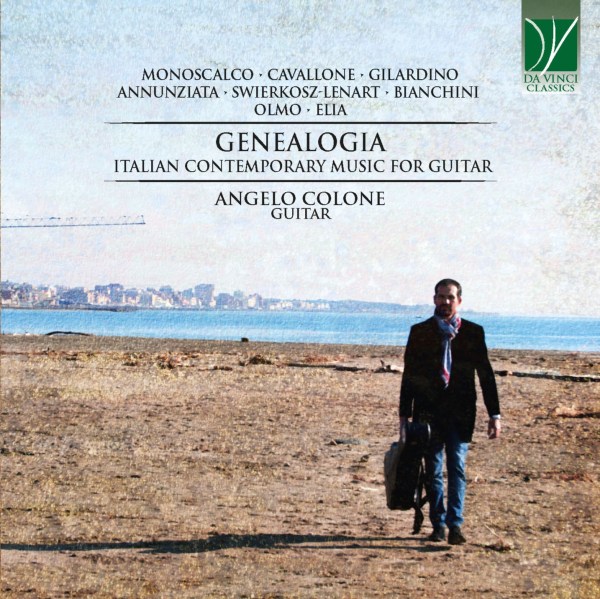 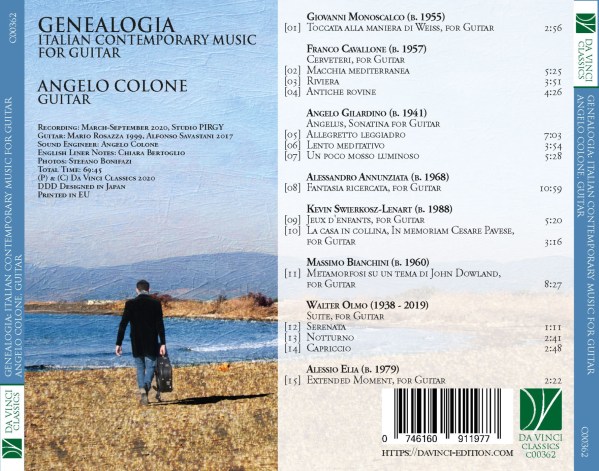 Angelo Colone: Interpreter of the most significant repertoire for guitar of the main Italian contemporary composers, soloist appreciated by the major international musical institutions, Angelo Colone graduated and perfected with Alirio and Senio Diaz, Bruno Battisti D’Amario, Angelo Gilardino.
Angelo has been Invited to play for cultural institutions such as the National Academy of Santa Cecilia, the House of Goethe in Rome, the Chigiana Academy of Siena, the Trame Sonore Festival in Mantua. Angelo has been performing since the end of the 1980s in Italian theatres and chambers in Rome, including the Teatro Eliseo, the Teatro Olimpico, the Auditorium Parco della Musica, the Regio theater of Parma, the Metropolitan Theater of Catania, the Magliabechiano Salone in the Uffizi and the Luca Giordano Room in Palazzo Medici Riccardi, Florence.
Abroad he was invited by international cultural institutions in China, Holland, Switzerland, Malta, Belgium.
He has frequently participated in radio broadcasts e.g. RAI, RAI Inter-national and Vatican Radio stations. Also he has participated as a guest in literary events on the occasion of the presentation of new literary works by authors such as Sergio Zavoli and Luis Sepùlveda.
During his concert career Angelo took part in original research projects recorded in significant CDs, including: "Sonetterra" with the Sestetto Moderno (1997), "Sintesi" (2002), "Angelo Angelo" (2004) containing the first absolute recording of the concert for guitar and orchestra Leçons de ténèbres, by Angelo Gilardino, "Goffredo Petrassi - Works for guitar" (2007), a monograph on Mario Castelnuovo-Tedesco for the series "The Masters of the guitar" for the magazine Seicorde ( 2008) realised on the occasion of the fortieth anniversary of the disappearance of the Florentine composer and followed by a cycle of direct broadcasts curated by himself for Vatican Radio, ”Angelo Colone Plays Angelo Gilardino" (2012) and the most recent for Brilliant Classics “Federico Moreno Torroba, complete works for solo guitar”.

Alessio Elia. Described as a unicum in the compositional landscape of our times (Il Corriere Musicale) Elia is considered one of the most original composers of the new generation. He was guest composer and researcher at the Liszt Academy in Budapest, the University of Debrecen, the Zoltán Kodály Institute in Kecskemét and the Sacher Foundation in Basel. His music is regularly performed all over the world in the most important concert halls and festivals and broadcast by the most important radios and television channels. Some of his works employ the integration of different systems of tuning, a compositional concept that he called "polysystemism", presented in numerous conferences including the one at the Cité de la Musique in Paris in 2014. He received numerous awards, including the Diploma of Merit of the Chigiana Academy in Siena for the piece Luminescences in 2005, and the first prize for the orchestral piece Rejtett dimenziók (Hidden dimensions) in the UMZF 2013 international competition, in the edition dedicated to Ligeti with Péter Eötvös presiding over the jury. He received commissions most importantly from Radio Bartók (Trasparenze) written for the National Hungarian Radio Orchestra; Alter Ego ensemble (Altered memories) for a project with pieces commissioned to Eötvös, Hosokawa, Ablinger, Lukas Ligeti, Sáry and Skempton; Impronta ensemble (Traces from Nowhere) for the oggimusica Festival in Lugano; UMZE - the historic ensemble founded by Bartók (Ekpyrotic Suicide), and and I Solisti del Teatro alla Scala di Milano (Octet), piece released in CD by Warner Classics in 2018, with I Solisti della Scala conducted by Andrea Vitello and published by Universal Music Publishing - Editio Musica Budapest.

Angelo Gilardino was born in 1941 in Vercelli (North-West of Italy) where he later studied (guitar, violoncello and composition) in the local music schools. His concert career, which lasted from 1958 to 1981, had a great influence on the development of the guitar as an instrument in the ‘limelight’ in the twentieth century. Indeed, he gave premiere performances of hundreds of new compositions dedicated to him by composers from all over the world. In 1967 Edizioni Musicali Bèrben appointed him to supervise what has become the most important collection of music for guitar of the twentieth century and which bears his name.

In 1981 Gilardino retired from concert work to devote his time to composition, teaching and musicological research.

Since 1982 he has published an extensive collection of his own compositions: Studi di virtuosità e di trascendenza, which John W. Duarte hailed as “milestones in the new repertoire of the classical guitar”, Sonatas, Variations, four concertos for solo guitar and guitar groups, seventeen concertos with orchestra and fifteen works of chamber music. His works are frequently performed and recorded.

His contribution to teaching began with the Liceo Musicale “G.B. Viotti” in Vercelli where he taught from 1965 to 1981 followed by an appointment as professor at the “Antonio Vivaldi” Conservatory in Alessandria from 1981 to 2004. From 1984 to 2003 he held post-graduate courses at the “Lorenzo Perosi” Accademia Superiore Internazionale di Musica in Biella.

He has also held 200 courses, seminars and master classes in various European countries at the invitation of universities, academies, conservatories, music associations and festivals.

As a musicologist he has made a considerable contribution to the guitar repertoire of the first half of the twentieth century with the discovery and publication of important works which were either unknown or considered as lost, such as Ottorino Respighi’s Variazioni per chitarra, the Sonata para guitarra by Antonio José and a large corpus of guitar works written for Andrés Segovia by Spanish, French and British composers during the Twenties and the Thirties. Since 2002 he has edited the publication of these works (32 volumes) in The Andrés Segovia Archive, published by Edizioni Musicali Bèrben. He also reconstructed the concerto for guitar and orchestra by the Russian composer Boris Asafiev, published by Editions Orphée, and he orchestrated the Hommage à Manuel de Falla by the Polish-French composer Alexandre Tansman, left unfinished by its author. The rescue of these works and their subsequent publication has given new substance to the historical repertoire of the twentieth century. Besides, he created new settings for Guitar and Orchestra of famous items of the repertoire for solo guitar.

In 1997 he was appointed as artistic director of the “Andrés Segovia” Foundation of Linares, Spain, a charge which he left at the end of 2005.

In 1998 he was awarded the “Marengo Music” prize of the Conservatory of Alessandria. The Italian Guitar Congress awarded him the prize “Golden Guitar” three times (1997, 1998, 2000), respectively for his compositions, his teaching and his musicological research. In 2009, he was an inductee of the “Artistic Achievement Award – Hall of Fame” of the Guitar Foundation of America. In 2011 the Guitar Festival of Córdoba (Spain) entitled to him the “Jornadas de Estudio” with dedicating concerts and lectures to his works. In 2018, he received career awards from Rome Expo Guitars and from Conservatorio di Musica “Luigi Cherubini” in Florence.

He has written and published biographies of Andrés Segovia and Mario Castelnuovo-Tedesco, and two books dealing with the principles of guitar technique. He has published a handbook for the benefit of those composers wishing to write for the guitar but who are not familiar with the intricacies of this instrument. He has also published a handbook of guitar history, a volume entitled La chitarra and a considerable number of essays and articles.