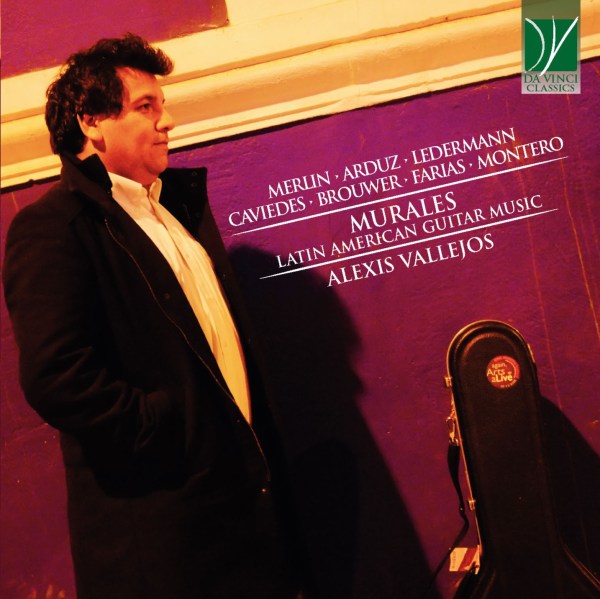 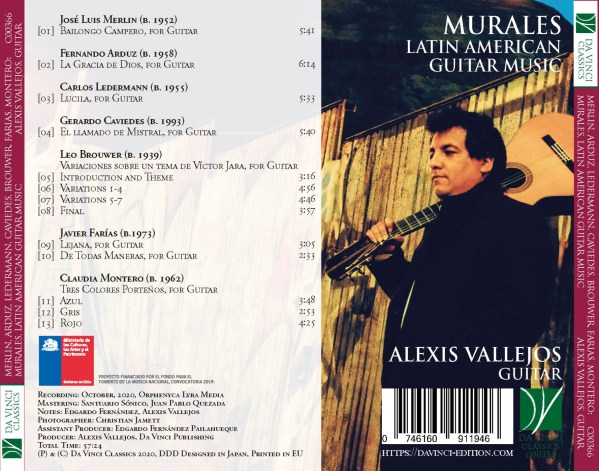 Alexis Vallejos: Classical guitarist Alexis Vallejos is one of the most important Chilean musicians of his generation. Winner of the 19th Andrés Segovia International Classical Guitar Competition (Linares, Spain), he has made successful concert tours in Asia, Europe and the Americas. Alexis Vallejos began his musical studies at the age of 18 with maestro Romilio Orellana in the Department of Music and Sonology at the University of Chile Faculty of Arts. He then earned a Master’s degree in Classical Guitar from the University of Alicante in Spain, where he studied with some of the most important guitar and lute teachers: Hopkinson Smith, Manuel Barrueco, David Russell, Ignacio Rodes, Carles Trepat, Roberto Aussel, José de Eusebio and Nigel North. He has won major awards in national and international contests. Besides being unanimously awarded First Prize at the 19th Andrés Segovia International Guitar Competition, he has also received awards in international competitions in various countries in Europe and the Americas. His search for new guitar music has led him to premiere a range of works, which he has recorded or presented in major festivals. Notable Latin American composers have dedicated their pieces to him, including: José Luis Merlin (“Bailongo Campero"), Carlos Ledermann ("Preludio divagante" and "Lucila"), Fernando Arduz ("La Gracia de Dios"), among others. He has performed with orchestras on several continents. Of particular note was his performance at the prestigious Oji Hall in Japan with the Tokyo Sinfonia as part of its 2017 international season. There he played a program with three concertos for guitar and orchestra, including the Asian premiere of the “Concierto Festivo” by renowned Puerto Rican composer Ernesto Cordero, a performance which earned him acclaim from both audience and critics. In 2016 he was appointed cultural ambassador of the Juan Noé Crevani Artistic High School (Arica, Chile), a position he has used to provide support for several cultural activities to benefit the city. This has given birth to the Arica International Classical Music Meeting, which from 2016 -2019 hosted guest musicians from Asia, Europe and Americas. Since 2015 he has been interested in supporting the development of the guitar, highlighted by his participation as Founder and Artistic Director of numerous annual or biannual initiatives, such as: Seminar and International Guitar Festival "Cuerda Pulsada", in different cities of Chile, International Festival "Agustín Barrios" in Japan, "Jornadas Internacionales de Guitarra de Cochabamba" in Bolivia, International Festival "¡El Bosque tiene Guitarras!" in Santiago de Chile, and others. Currently he works as Professor of the Classical Guitar and is Department Chair at the Universidad Mayor in Santiago de Chile. He is also in private study with selected students from Chile and Bolivia, who have been recognized in International Contests. In addition, he has a guitar studio in Chiba, Japan. He regularly gives concert tours, seminars and masterclasses in Japan, Russia, China, Korea, Germany, Spain, Italy, Argentina, Philippines, Chile, France, Bolivia and Peru. He has performed in important concert halls such as: Oji Hall, Sogetsu Hall, IBK Seoul Arts Center, Daejeong Arts Center, Busan Arts Center, Seogwipo Jeju arts Center, AIM Hall de Manila, Teatro Municipal de Santiago “Sala Claudio Arrau”, Teatro Acha, SALA GAM, Teatro de Arequipa, Nave Cultural, Teatro Paisielo de Lecce, Museum Andrés Segovia, Teathre Pushkin, Chateau du Barjac, and others.
He uses Royal Classics strings, and performs primarily with an Arcángel Fernández Guitar; he has also performed major concertos with Hongsik Uhm and Guillermo Aguer guitars.