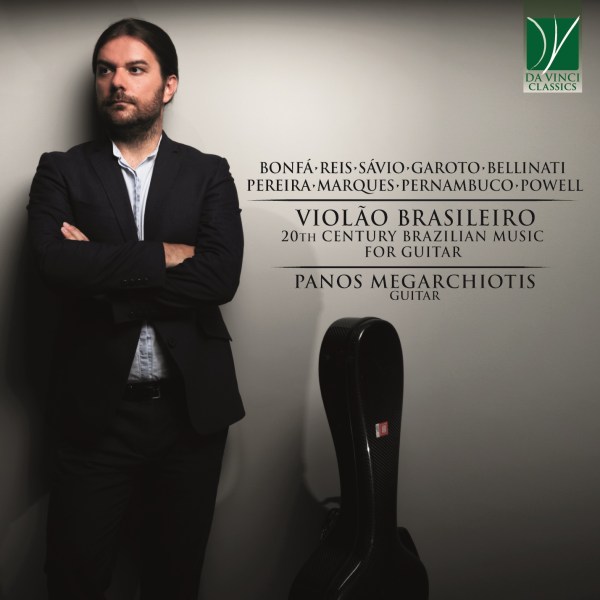 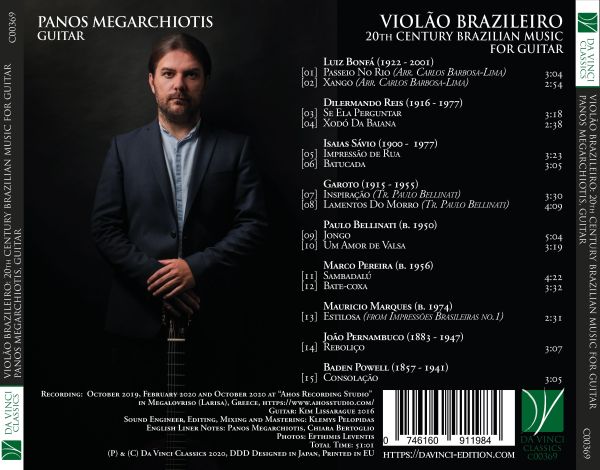 The guitar is Brazil’s national instrument and has played an important role in the evolution of Brazilian music, especially during the twentieth century. As a classical guitar student, I came across Brazilian guitar music already during my first years of studying and its unique charm and beauty fascinates me even after all these years.
The first time to present this repertoire in a thematical concert and to write about the Brazilian guitar music was at the final project of one of my Master programmes at the Zurich University of Arts. Since then I often give concerts based on this repertoire and my goal is to enrich it with pieces that are not often played or even unknown. It was a really difficult task to decide which pieces should be included in this album. I couldn’t resist playing some famous pieces that I love, but I also tried to include pieces that are not well known . There are so many wonderful Brazilian composers with lovely pieces and it’s impossible to include all of them in one album. Nevertheless, a purpose of this recording is to encourage the listener to investigate further the endlessly charming world of Brazilian guitar music.
Brazilian music is a unique blend of European harmony and melody, African rhythms and Native American culture. Starting in the 17th century, slaves from Africa brought along the impassioned drumming of their candomble rituals. The first Portuguese colonists added their ballads who were accompanied with cavaquinhos, the bandolim, bagpipes and the Portuguese guitar. Body movement, inspired largely by the undulating dances of the African slaves was incorporated into Brazilian music. Even European-imported dance rhythms like the polka and mazurka were adapted and tropicalized into the maxixe, a kind of tango that became popular during the 1920s.

INTRODUCTION TO CHORO
by Chiara Bertoglio

When facing an unknown word in a foreign language, most people wonder: What does this word mean? What does it indicate? The case with the Brazilian word Choro is complex under both viewpoints: it is difficult to specify both the meaning and the origins of the word. The most common explanation is that choro means “cry, weeping”, and that it indicates a musical genre typical of Brazilian music. In fact, there is no academic consent on the etymology (and therefore the true significance) of the word, and it took a variety of meanings in time. Originally, the word choro indicated an instrumental ensemble, rather than a musical genre; later, it began to indicate an instrumental composition; it was also used to identify a playing style, as an adjective juxtaposed to terms indicating European musical genres (so, for example, one could speak of polca-choro, i.e. a Polka played in the style of choro, or of valsa-choro, i.e. a Waltz). The term choro began to indicate a musical genre at the time of Pixinguinha (Alfredo da Rocha Viana, 1897-1973), a musician who was considered as the father of Brazilian music. In the words of Cazes, a historian of the genre, “Starting with the music of the chorões [choro musicians] (Polka, schottische, waltzes, etc.), and mixing elements of the Afro-Brazilian tradition, rural music, and his varied experience as a musician, Pixinguinha joined ideas and gave choro a defined musical form. From Pixinguinha’s genius, choro received rhythm, grace, and warmth. It also received the habit of improvisation, a specialty of which he was master”.
In its mature stage (after the Twenties), therefore, choro is a musical genre, indicating the intertwining of European dance music with African rhythms and performing practices; moreover, it can be used in so-called “art-music” to indicate works which are influenced by choro styles, or also to suggest a tempo or performance style.
The music and performers of choro frequently crossed the boundaries between cultivated and popular music, between composition and extemporization; choros were frequently performed by classically-trained musicians who met together and organized improvisation sessions with free and informal music-making – albeit with virtuoso elements and codified forms and styles.
This fresh and spontaneous atmosphere seems hard to reconcile with a literal meaning of the word which apparently refers to sadness. In fact, this etymology has sometimes been contested. Some scholars have advanced the hypothesis that the word may have come from an evolution of the African xolo, referring to traditional dances; others have suggested that it may be a shortening of choromeleiro, alluding to ensembles of “charamelas”, i.e. of wind instruments, used in the plantations in the early decades of the nineteenth century. Still others propose that the term actually derives from chorar, weeping, but with reference to the intensity of the emotions it causes (emotions which can be happy, funny, sad or melancholic, just as it is possible to cry when laughing or for happiness or for sadness).
The great Brazilian composer Heitor Villa Lobos cut these hypotheses short, maintaining that, just as one would not request Chopin to provide a definition of a “standard form for a Chopin Ballade”, similarly one should not investigate the “standard” form of a choro. In his words, “The choro is popular music. […] The choro is of the musicians that play it, of good and bad musicians who play for their pleasure, often through the night, always improvising, [and] where the musician exhibits his talent, his technique”. Choro ensembles thus comprised instruments with European roots (especially the instruments in charge of the melodic and harmonic components) along with percussion instruments with African and native origins. Among these instruments, the guitar has always been a protagonist, often assuming a position of pre-eminence with solo passages. Its use in choro music has been likened to the function of the piano in ragtime music: a primus inter pares, a first among its peers, but capable also of sustaining solo parts, even extended ones. In the genre’s history, the ensemble guitarists could perform as soloists, with the accompaniment of percussions, but they could also assume the role of accompanists when supporting other melodic instruments in their tunes. Even Villa-Lobos himself began his career as a guitarist in choro ensembles, and it may be argued that his Choros, composed at a later point of this activity, are among his absolute masterpieces. His tradition has been continued and fostered by countless musicians (especially guitarists), and its liveliness and vivacity continue to present-day, as is testified by this Da Vinci album with its intriguing and electrifying repertoire.

Panos Megarchiotis: Panos Megarchiotis is a guitarist from Greece. He began attending guitar lessons with Giorgos Papaioannou, in his hometown Trikala. From 2006 to 2009 he studied with Gerhard Reichenbach at the State Conservatory of Thessaloniki in Greece and he obtained the Guitar Diplome. Under the guidance of Elena Papandreou, while attending her classes, he was accepted at the Zurich University of Arts (ZHdK), where he continued his studies in guitar with Prof. Anders Miolin and completed two Master Degrees in Music Performance and Music Pedagogy. Later on, he attended guitar classes with Paul Galbraith at the Basel Music Academy, where he obtained the Certificate of Excellence MAB. He has also studied Musicology at the University of Fine Arts in Thessaloniki.
He has won prizes in various competitions and guitar festivals such as the Hermoupolis Guitar Festival (1st prize), the Volos Winter Guitar Festival (1st prize), Competition for Contemprorary Music (ZHdK) (1st prize), Patras Guitar Festival (2nd prize), Velingrad Guitar Festival (2nd prize).
His repertoire is very wide and extends from Renessaince to Contemporary music. In 2014 he premiered Karin Wetzel’s piece Amorphose II for guitar and live electronics. More performances of the piece followed, including performances at “Tage Neuer Musik” in Weimar, Germany and “Archipel” in Geneve. He has also participated in important contemporary music projects organised by ZHdK, such as Arc ‘n’ ciel and the “Musik aus Südamerika. Werke von Flo Menezes und Germán Toro-Pérez” where he performed “Quaderno” for marimba, guitar and live electronics by Flo Menezes.