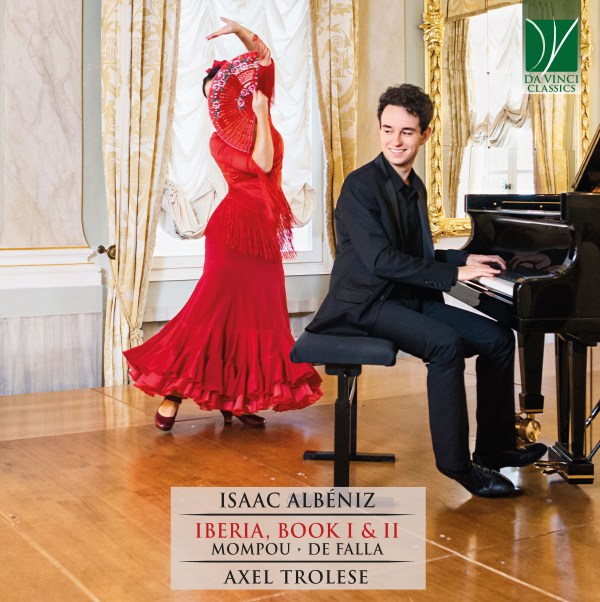 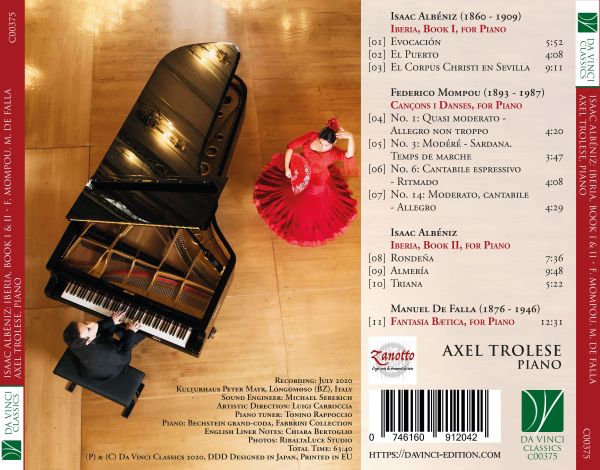 Alex Trolese: Axel Trolese is an Italian pianist, born in 1997. He has studied with some of the leading international musicians, such as Louis Lortie, Benedetto Lupo, Maurizio Baglini and Denis Pascal. He has obtained a Master's Degree both in Paris' Conservatoire National and Rome’s Accademia di Santa Cecilia, moreover he earned a Diploma in Cremona's Conservatorio Monteverdi.
He is an Artist in Residence at the Queen Elisabeth Music Chapel; moreover, his artistic activity is supported by the Associazione Musica con le Ali.
Being a fine interpreter of French music, he recorded in 2016 his first album “The Late Debussy: 12 Etudes & 6 Epigraphes Antiques”, which was praised by numerous critics and on magazines like Repubblica, Musica and Amadeus, among the others.
Spanish piano music is an other major passion, which is at the heart of his next discographic project. In 2021 Da Vinci Classics will release “Iberia: Songs & Dances”, the first volume of a complete recording of Isaac Albéniz’s Suite Iberia, together with works by Federico Mompou and Manuel De Falla.
Prize-winner in many prestigious competitions ("Ettore Pozzoli Piano Competition", "Grand Prix Alain Marinaro” and "Premio Venezia”), Axel Trolese has played in many prestigious concert halls, including Rome's Auditorium Parco della Musica, Venice's La Fenice Theatre, Paris' Salle Cortot, Beijing's Millennium Concert Hall, Milan’s Società del Quartetto, Weimar's Weimarhalle, the French Ministry of Culture, Rome’s Académie de France and Quirinal Palace, the Amiata Piano Festival, Debussy’s Home-Museum, Risonanze Festival and the Fazioli Concert Hall.
Some of his concerts have been broadcasted by Radio3, France Inter and Venice Classic Radio.
He has played as a soloist with orchestras like the Jenaer Philharmoniker and Roma Tre Orchestra, and worked with conductors like Massimiliano Caldi, Markus L. Franck, Ovidiu Balan, Jesus Medina and Pasquale Veleno.
Axel Trolese has appeared in a documentary produced by ARTE about the Italian composer Roffredo Caetani, playing his works on the Bechstein grand piano that his godfather Franz Liszt gave to him, in the magical atmosphere of the Giardini di Ninfa.
He’s the main character and pianist in the short film “Danse Macabre” by the famous Italian director Antonio Bido, inspired by Saint-Saëns' homonymous tone poem.

Frederic Mompou (b Barcelona, 16 April 1893; d Barcelona, 30 June 1987). Catalan composer. Essentially a piano miniaturist and songwriter, he created a small but highly personal body of work. He began to study the piano at the Barcelona Conservatory and gave his first public recital at the age of 15. In 1911 he travelled to Paris where he studied privately with Ferdinand Motte-Lacroix (piano) and Marcel Samuel-Rousseau (harmony). He remained in Paris until 1941, when he returned to Barcelona. A shy, somewhat timid person, he nevertheless moved in well-connected circles throughout his life and made notable friendships, including Poulenc and the painter Mirò, with the second of whom he had something in common as a creative artist, in terms of the surface simplicity of their work and their reliance on distinctive symbols or gestures drawn from their Catalan environment and folklore. For many years, until disabled by a stroke, he lectured on his own music at Música en Compostela, an annual gathering of international students at Santiago de Compostela.

Mompou’s op.1 is the set of nine Impresiones intimas (1911–14). According to the composer’s own account, these miniatures – which exhibit a mixture of adult musicality and naive, childlike emotional directness – were written in response to hearing Fauré. However, if they do display influences, it is more those of Debussy, Ravel and Mompou’s nationalist forebears, while his own distinctive voice, which remained little changed over the course of his life, is already evident. There followed a series of works bearing descriptive titles – Scènes d’enfants, Pessebres, Suburbis (the titles used are in the language of the country where the work was first published) – in which the example of Satie becomes more evident. Like Satie, Mompou turned his own technical limitations into a personal aesthetic, which he termed primitivista. This is immediately obvious on the page in an extreme economy of notation. But this apparent simplicity belies the composer’s struggle for perfection. Even the shortest of miniatures were worked on or revised over a period of years. Satie is also discernible in the use of such performance directions as ‘Chantez avec la fraîcheur de l’herbe humide’ in Scènes d’enfants. But there is no sense of Satiesque irony in Mompou, whose naive approach remains rooted in Romanticism. He had little in common with Les Six.

Aside from the French influence, Mompou owed much to his Spanish and Catalan nationalist forebears. As with Falla, the structural and modal idiosyncracies of folk music pervade his work. Indeed the far greater virtuosity of Falla’s music belies a great deal that the two composers have in common. Modes and figurations typical of Andalusian and other regional idioms are to be found in Mompou, but more often his melodic writing is rhythmically and structurally suggestive of Catalan folksong. Occasionally authentic or quasi-authentic Catalan melodies are used, such as ‘La filla del Marxant’ in the last of the Scènes d’enfants. The long series of 14 Cançons i danses are all, with the exception of numbers 5, 6, 10 (which uses two of the Cantígas de Santa Maria of Alfonso el Sabio) and 13 (the only one for guitar) and the danses of 3, 9 and 14, based on traditional Catalan tunes, which are enfolded in rich, sophisticated harmony. This combination of diatonic melody with rich, often chromatic harmony, is the basis of all Mompou’s music.

Many of his miniatures set out to evoke the essence of a particular mood, either a response to a scene in life or something more abstract: he believed in the ‘magical’ power of harmony to be quite precise in this respect. His Cants mágìcs and Charmes may be seen as an attempt to imagine how a medieval practitioner of the occult might have used this power. In the four volumes of Música callada (1959–67) – ‘quiet’ or ‘silent’ music – whose texts are taken from St John of the Cross (a writer set by Mompou on a number of occasions), he creates a mystical, spiritual series of moods. Here, as with late Falla, there is an increased austerity compared with earlier works, but the structural simplicity remains unchanged. A final substantial group of pieces comprises a body of often very beautiful songs, many of them settings of Catalan texts. Of these, Combat del Somni may perhaps be singled out as an example of Mompou at his most expansive and haunting, while the two sets of Comptines, which set traditional counting-game rhymes, exemplify his interest in the world of childhood. Late in his life, Mompou produced some more ambitious choral and stage works, including the oratorio Improperios, while many arrangements and orchestrations of his music have been made by other hands.