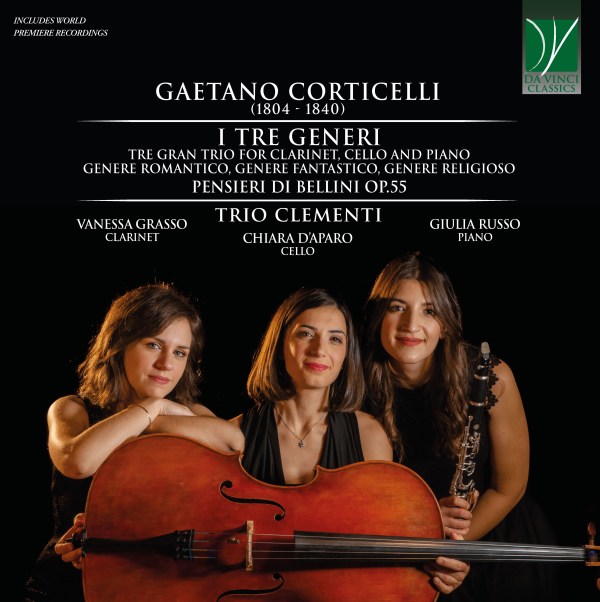 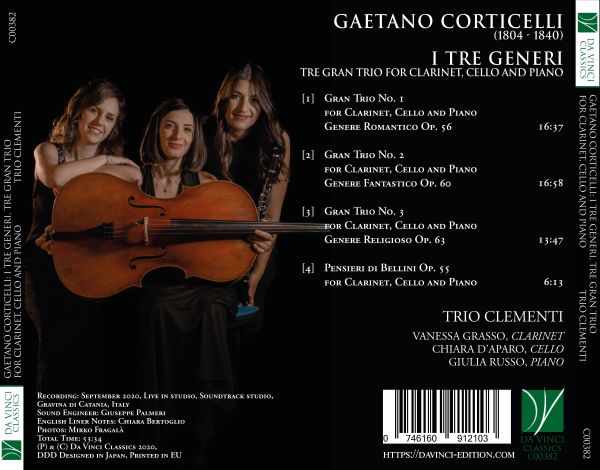 Vanessa Grasso (Clarinet): She begins studying the clarinet under the push of her grandfather musician. In 2006 she was admitted to the "Vincenzo Bellini" Higher Institute of Musical Studies in Catania in the class of M. Carmelo Dell’Acqua. She graduated in 2011 with full marks and continued his academic study, obtaining, at the same Institute, in 2014 the degree at the end of the two-year period for the training of teachers with full marks and honors and in 2015 the qualification to teaching with full marks. At the same time she attended one-year specialization courses with maestro Calogero Palermo and various master classes with masters Patrick Messina, Manuel Jodar, Vincenzo Paci, Giovanni Punzi. She has participated in several theatrical works performing music in world premiere. She has always been involved in a conspicuous concert activity in various chamber ensembles including the Calamus Clarinet Ensemble with which she performed in Milan during EXPO 2015, in Belgium on the occasion of the clarinet festival. She recorded a disc with the singer Rita Botto and with the Sicilian Clarinet Orchestra. With the Clementi Trio consisting of clarinet, cello and piano, she dedicates herself to the classical and contemporary repertoire, also enhancing the composers of the Sicilian territory. Since 2017 she has been a clarinet teacher at the musical high school “A. Musco ”of Catania.

Chiara D'Aparo (Cello): She began studying the cello at a very young age in her hometown. In 2007 she was admitted to the cello school at the "V. Bellini ”in Catania where in 2012 she graduated, under the guidance of M. Salemi, with full marks. She carries out an intense chamber music activity that sees her part of various chamber ensembles, including the Clementi Trio, which has performed at S.C.A.M in Catania, A.F.A.M in Floridia and the Accademia Filarmonica di Messina, Concert Association of the city of Noto. Participates in numerous national and international competitions, always ranking in the first places. She also studied at the I Musici Di Parma Academy with G. Gnocchi and participated in masterclasses with R. Filippini, U. Clerici, U. Hoffman, G. Georgescu. She also frequently performs in orchestral formations, and in 2017 she also collaborated with the Santa Cecilia National Orchestra. In 2014 she graduated at the end of the two-year course for teacher training with full marks and honors and in 2015 she obtained the teaching qualification. As orchestral musician she played with internationally renowned artists such as D. Rivera, D. Rea, A. Ducros, E. Bosso, S. Bollani, S. Pagliani, C. Hartmann and M. Argherich. Currently she is improving with M ° Luigi Piovano, first solo cello of the national orchestra of Santa Cecilia. She is suitable for cello auditions in a row at the Regional Orchestra of Calabria, at the Vittorio Emanuele Theater in Messina and at the Massimo Vincenzo Bellini Theater in Catania.

Giulia Russo (Piano): She began studying piano in 2005 and in 2007 was admitted to the “V. Bellini” Higher Institute of Musical studies in Catania. Student of Prof. Maria Santina Schillaci, in 2016 she graduated in Piano with full marks and honors. In 2018 she obtained the second level Specialized Degree in Music Disciplines with full marks, honors and with the possibility of recording and printing the thesis. She has participated in numerous national and international piano competitions, reporting in all first prizes and absolute prizes. She performed in concert at the Mozarteum in Salzburg in the summer of 2014 and 2015. In September 2016 she performed as a soloist, together with the youth orchestra of the Bellini Institute, Beethoven's third concert for piano and orchestra. Since 2018 she has been part of the Clementi Trio, a chamber ensemble with a particular tonal refinement. She devoted herself to the activity of collaborating pianist for choirs and opera theater performances, a role she also held at the Massimo V. Bellini Theater in Catania. She has followed numerous master's degrees with great masters such as: Bruno Canino, Randall Benway, Violetta Egorova, Joaquìn Achùcarro, Grigory Gruzman, Gerlinde Otto, Natalia Troull, Fulvio Turissini, Benedetto Lupo, Andrea Lucchesini. Currently she attends the two-year specialist course at the Accademia del Ridotto in Stradella under the guidance of M. Aquiles Delle Vigne and the three-year specialist chamber music at the Centro Studi Musica e Arte in Florence with M. Pier Narciso Masi.