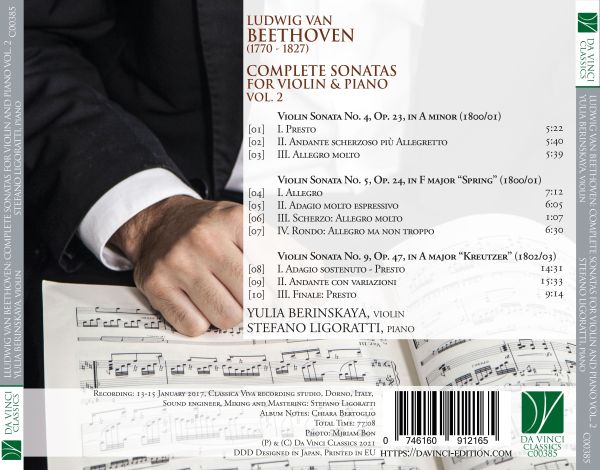 Stefano Ligoratti: Stefano Ligoratti (Milan 1986) studied at the “G. Verdi” Conservatory of Milan. His Academic course was characterized by a certain musical versatility that led him to obtain many degrees. He graduated in Piano, Organ, Harpsichord, Orchestral Conducting and Composition. He won several prizes in national and international competitions, including the prestigious European Piano Competition "Mario Fiorentini" of La Spezia (Italy, January 2010), where he won the first prize, the audience award and the prize for the youngest pianist. He is Artistic Director of the music network "ClassicaViva", and he performs with the homonymous orchestra, which he founded in 2005, often in the dual role of pianist and Conductor. Recently he is involved in musical dissemination, strongly believing that the historical period in which we live needs a wide operation of musical literacy. In this regard, in January 2019, together with the pianist and musicologist Luca Ciammarughi, he began a season of eight Concert Lessons (still in progress) at the Palazzina Liberty in Milan, under the name of "Non capisco! ... Son profano!”, Offering the public an historical and analytical verbal explanation of the various musical forms. As a pianist he recorded CD’s for the labels: "ClassicaViva" ("Variations ... and beyond", published in 2007; "Fantasies", published in 2009; in duo with the russian violinist Yulia Berinskaya: "Violin in Blue" published in 2010 and "Violin in White" published in 2012); "Limen" ("Sturm und Drang" published in 2018); “Da Vinci” (“F. Schubert: Works for Piano 4 hands” in duo with Luca Ciammarughi published in 2017), (“The voice of Violin” in the role of Conductor of “I musici di Parma Orchestra” and Yulia Berinskaya as a Violin Soloist), (Beethoven: Complete Works for Cello and Piano” Published in 2019 in duo with Matilda Colliard as Cellist). Also He is finalizing the recording of complete works for Cello and Piano by G. Goltermann (for “Brilliant Classics” label) with the cellist Cosimo Carovani.

Yulia Berinskaya: Yulia was born into an artistic and musical environment; her precocious talent was discovered at an early age by her father Sergey Berinsky, among the greatest composers of the 20th century in Moscow, and he encouraged her to study violin. Her training and her extraordinary musical potential were encouraged and cultivated by internationally renowned artists such as E. Tchugaeva and V. Tretiakov, the Borodin Quartet, the Moscow Trio, who guided Yulia to graduate with honours from the Moscow Tchaikovsky Conservatory. She then continued her studies at the Hochschule für Musik in Wien under the tuition of D. Schwarzberg. Afterwards, Yulia began to a brilliant career as a soloist, chamber musician and teacher, acclaimed in Italy and abroad: Netherlands, Switzerland, France, Germany, the former Yugoslavia, USA, Israel and Russia. Her recitals represent her quality as a versatile artist, and her virtuosity accompanies many diverse styles. She has had prestigious collaborations with several orchestras: Verdi Orchestra in Milan, Milan Conservatory Orchestra, Moscow Amadeus Orchestra, Sverdlovsk Philharmonic Orchestra and I Musici di Parma ensemble. Being a passionate chamber musician, she has been invited to some of the major Italian and European festivals, performing alongside artists including S. Krilov, Y. Bashmet, D. Cohen, V. Mendelssohn, F. Lips. Yulia regularly gives masterclasses in Mendrisio (Switzerland), Timisoara (Romania), Rhodes (Greece), Mulin de Andee (France), Portogruaro (Italy), Venice (Italy); also she has founded her own violin course at the Milano Music Masterschool academy and is regularly a jury member in international violin competition. Yulia has performed as a guest leader with the following orchestras: Teatro San Carlo in Naples, Orchestra of Trento and Bolzano, Orchestra Earl (Austria), Teatro La Fenice in Venice, The Philharmonic Orchestra of Liubljana. She records for the labels: Koch Records (Germany) and Gramsapis ArtClassic (Russia), Sonart Studio, Playing News, LimenMusic (Italy), Da Vinci (Japan). Her recordings are regularly broadcasted by Radio Vaticana, Radio Classica, Radio della Svizzera Italiana.