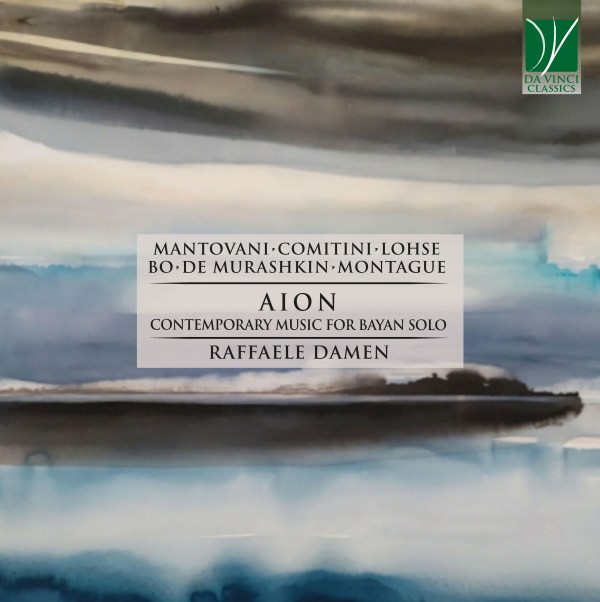 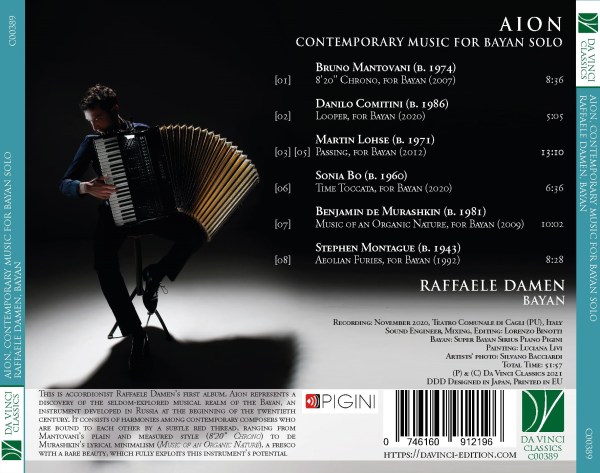 Let us listen to the stream of music and, pushed by the foundation of the past, be projected towards a future in the making. Music is the moment, a present with no depth: the Aion.

Bruno Mantovani: 8’20” Chrono
After years of procrastination and missed dates, in 2007 I eventually decided to compose a work for Pascal Contet. A neophyte in the field of the accordion, I wanted to face the instrument not from the viewpoint of organology, but rather by considering a musical problem that I regularly contemplated: the overlapping of intervals. I had tried this experience on the piano in the Study for alternating hands which I devoted to that instrument. I then wanted to see whether the accordion’s two keyboards could be even more conducive to such a rhythmic conception. Here, I obviously found the most suitable instrument for creating the illusion of a complex rhythmic polyphony. Each of the ten fingers plays a regular rhythm, and it is the overlapping of different patterns which creates the continuous texture. Written in a few days, this virtuoso and stereophonic work (since it is similar to a ping-pong game between the two keyboards) alludes, by its title, to a famous television series whose tension and suspense particularly inspired me! It was premiered at the Besançon festival by its dedicatee.

Danilo Comitini: Looper (2020)
Looper originates from a specific request to compose a piece focused on time. It consists of three distinct sections showing different time-stream visions. Each section follows its own criteria of internal directionality, emphasized by the combination of the time parameter with those pertaining to rhythm, register and harmony. The first section is a fast “rhythmic variation” on Tempo, leading to the “spatial” or “register” variation (second section). The second section is built on two parallel and strictly connected vectors running towards a progressive compression of registers and note duration. In opposition to the first two, the third and last section is characterized by an isochronous figuration with a harmonic function, which influences and directs the flow of the slow Perpetuum Mobile, always at the edge of silence.
Martin Lohse: Passing
“In my music, I try to encircle small musical moments and atmospheres, which can timeless progress and unfold. The collocation and collision of a “pure” and clear music with a disintegrated and multi-layered one is one of the main characteristics of my music. In the heart, music often emanates a harmonic and melodic reminiscence of past experiences in glints or longer periods. Combined with a floating sensation (accelerando, decelerando etc.), this creates a music with the organic form as one of its main foundations.”
This is a musical technique developed by Martin Lohse in 2009, whereby he combines polystylistic elements with a simple repeated sequence of chords, creating a music with both baroque and romantic elements, all in different tempos but with no or very few dissonances.

Sonia Bo: Time Toccata
“The sun had not yet risen. The sea was indistinguishable from the sky, except that the sea was slightly creased as if a cloth had wrinkles in it. Gradually as the sky whitened a dark line lay on the horizon dividing the sea from the sky and the grey cloth became barred with thick strokes moving, one after another, beneath the surface, following each other, pursuing each other, perpetually.
Gradually the fibres of the burning bonfire were fused into one haze, one incandescence which lifted the weight of the woollen grey sky on top of it and turned it to a million atoms of soft blue. The surface of the sea slowly became transparent and lay rippling and sparkling until the dark stripes were almost rubbed out. Slowly the arm that held the lamp raised it higher and then higher until a broad flame became visible; an arc of fire burnt on the rim of the horizon, and all round it the sea blazed gold.” From “The Waves”, Virginia Woolf

Benjamin de Murashkin:
Music of an Organic Nature
Music of an Organic Nature is a piece wandering through several independent sections, seeking to weave them together into an overarching structure of one long crescendo and acceleration. Taking inspiration from the medieval to minimalism, these sections vary from the heavy passacaglia-like opening to the later soaring repetitions. Only as the piece finally subsides does a shadow of the opening passages come back into view under the collapsing figurations of the climax.

Stephen Montague: Aeolian Furies
The Furies, or Erinyes, as they were called in ancient Greek, were three fleet footed figures in Greek and Roman mythology who pursued and punished earthly evildoers. They were inexorable and unrelenting, but just. It seems that not even the Sun could transgress his orbit without The Furies overtaking and punishing him (or so it was claimed by Heraclitus).
It the same mythology Aeolus was King of the Four Winds and viceroy of the gods. The aeolian harp in which strings are gently played by the wind, and the aeolian scale which is A to A on the keyboard are derived from his name.
Aeolian Furies exploits the accordion’s unique hurricane mechanics in a whirlwind of aeolian scales played with punishing fury.

Raffaele Damen: Raffaele Damen graduated with honours as accordionist from the Conservatory Rossini of Pesaro, Italy under Paolo Vignani. He studied at the Folkwang Universität der Künste of Essen, Germany with Mie Miki, at the Italian Accordion Accademy with Claudio Jacomucci and at the Conservatory Santa Cecilia of Rome with Massimiliano Pitocco.
He has been invited in varius music festivals in Italy and abroad such as: Accademia Filarmonica Romana, Radio3 Suite, Italian Cultural Institute in Amsterdam, PIF Castelfidardo, "Accordéon-Nous" in Mons, Philharmonic Society of Trento, Sarzana Opera Festival.
He won prestigious accordion competitions such as: Val Tidone, Stresa, Luigi Nono, PIF Castelfidardo, Premio Abbado and others.
He performed as soloist the Gubajdulina's "Fachwerk" with FORM – Orchestra Filarmonica Marchigiana conducted by Daniele Rossi in the "Two-sides" concert series. In 2019 togheder with the pianist Roberta Pandolfi, he created a new international concert season “Fossombrone Classica”.
He has worked alongside composers Sonia Bo, Danilo Comitini, Paolo Giaro and Mario Totaro in order to increase the art music accordion repertoire.
His performance repertoire includes music from Johann Sebastian Bach to the contemporary works by Luciano Berio.

Danilo Comitini: He was born in the United Kingdom in 1986. He has studied in Italy with Alessandro Solbiati (Giuseppe Verdi Conservatory, Milan) and Ivan Fedele (Accademia di Santa Cecilia, Rome). His opera The spectacles, based on a novel by E. A. Poe, was staged at the Teatro Rossini of Pesaro in 2017.
He is winner of numerous international competitions and, as a result, he has performed in music Seasons, contemporary and non, both in Italy and abroad. In his own music, he searches for a message beyond sound. His compositions are polyhedral works which seek a perceptive interest in sound, gesture, form and
in a narrative aspect that gives music a means to describe an inner transformation. Beethoven himself, starting from the Fifth (but maybe even before), gives life to a concept of music loaded with a meaning "beyond" itself and carries a message. For Comitini, this is perhaps the most stimulating aspect of the narrative side of music, which is not necessarily telling a story or referring to something extra-musical. That is the most belittling aspect of music because it gives a value wich is not absolute. It is by "entrusting" music with a message and by letting it carry us from one vision (about the world and life) to another, as extremes of a dramaturgical vector, that music can achieve its best results. Thus, each piece is a new journey full of discoveries. According to the composer, this is one of the possible ways to write (but also to listen to) music. Especially in the artistic field, history has taught us that it is not the choice of one ideology or another, or this or that style, that can lead us to beauty. Even the most different ideologies are different ways of telling more or less the same concepts and the same emotions inherent in humankind. Comitini is not often interested in a kind of art that avoids expressing the human being, who is life: birth, growth and change, death. A path forward, therefore, which for the composer's way of "feeling" can be deeply expressed by the dramaturgical force of music, a direction in which the audience can also recognize and orient themselves.

Sonia Bo: She obtained diplomas in piano, choral music, and composition. In 1985 she won first prize in the international competition "Guido d’Arezzo" and in a competition for orchestral works in the European Music Year. Her works have been performed in major theatres (Teatro alla Scala festival; "NOS Radio Philharmonic Orchestra"; "Verdi" orchestra-Milan; "Maggio Musicale Fiorentino"; "La Biennale"–Venezia; ISCM Festival; "Juillard School"-New York, "Almeida" Theatre- London, etc). Her works are published by Ricordi, Curci, Edi-Pan, Sconfinarte. She teaches composition at the Conservatory of Milan, where she has been the Director from 2010 to 2013.