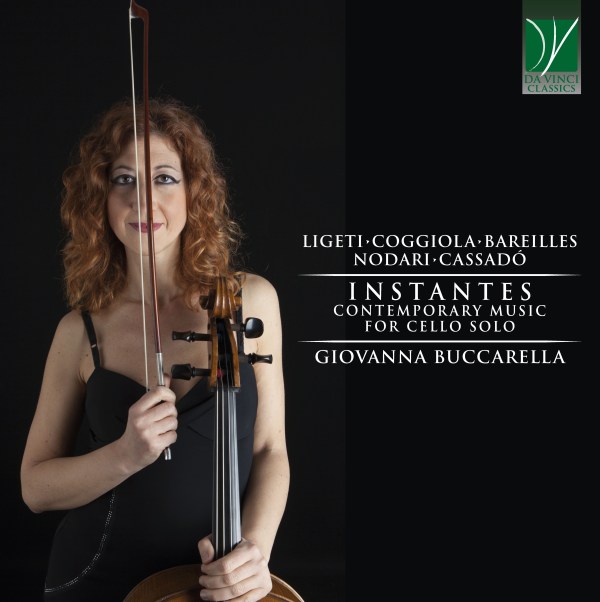 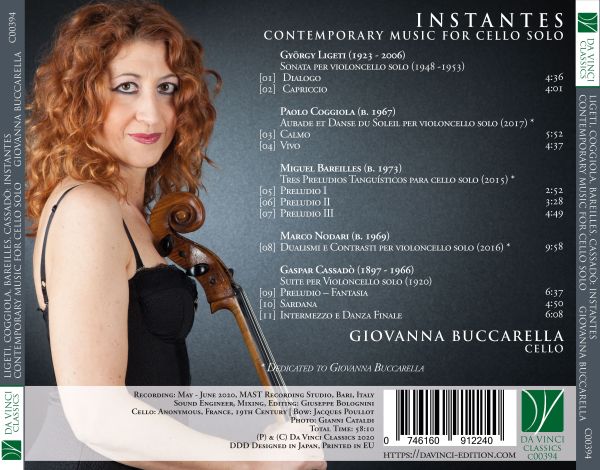 In the seventeenth century, the idea of writing works for unaccompanied cello was a pioneering one; it had been attempted notably by some Italian musicians, including Domenico Gabrielli. In the eighteenth century, their heritage was received and brought to perfection by Johann Sebastian Bach, with his magnificent Six Suites for unaccompanied cello. These works, however, remained largely unperformed throughout the following century. The few who did know them and appreciate their greatness (such as Robert Schumann) thought them unsuitable to the concert hall, and therefore provided them with piano accompaniments. Following the model of Paganini’s Capriccios for solo violin, similar virtuoso pieces for unaccompanied cello were written in the nineteenth century, but they frequently remained within the domain of the “etudes” (significantly, also many early editions of Bach’s Suites were titled “Etudes”). Only in the twentieth century did the unaccompanied cello acquire a standing of its own in the concert programmes; that century and the following saw the flourishing of the repertoire for unaccompanied cello, as is testified by the works performed in this Da Vinci Classics album. (C.B.)

Giovanna Buccarella: Born in Bari, graduated in cello under the guide of Vito Paternoster at the "N. Piccinni" Conservatory of Bari. She studied with Amedeo Baldovino and Michael Flaksman and followed, for several years, the chamber music courses taught by the Trio of Trieste at the Music School of Fiesole, the International High School of Chamber Music of Duino at the Collegio del Mondo Unito and the Accademia Chigiana of Siena, where he obtained the Diploma of Merit twice in a row.
She devoted herself permanently to the chamber repertoire, always obtaining broad consensus from the public and critics: under the guidance of the Trio of Trieste she formed the trio Clara Haskil and later formed the Duo Schumann with the pianist Francesco Monopoli. She currently performs with the guitarist Francesco Diodovich as Duo Mateaux, with whom she has already released three CDs: "ONDE" ed. DotGuitar, "VIAJES" ed. GuitArt, "DOUBLE CONCERTO" ed. Stradivarius Milano Dischi with the Pugliese Philharmonic Orchestra.
She was a founding member and principal cello of the COLLEGIUM MUSICUM Chamber Orchestra of Bari, with which she has 15 musical seasons, collaborations with artists of undisputed prestige including Giuliano Carmignola, Claudia Antonelli, Sergio Fiorentino, Aldo Ciccolini, Angelo Persichilli, Gigi Proietti, Moni Ovadia, Leopoldo Mastelloni, Micaela Esdra, Michele Mirabella, Maurizio Micheli, Emilia Fadini, Mauro Maur, Susanna Mildonian, Sonia Bergamasco, and also recordings for RAI RADIOTRE (among others "I Concerti del Quirinale" in 2007 in the presence of the President of the Republic ") and CD publications.
She has collaborated with numerous orchestras and theaters: the Rome Opera House, the Petruzzelli Theater in Bari, the Rossini Opera Festival in Pesaro, the Italian Youth Orchestra, the Magna Grecia Orchestra of Taranto, the Province Symphony Orchestra of Bari, Orchestra Ensemble "The Soloists of the Italian Opera" (United Arab Emirates - "Madame Butterfly").
For some time she has also dedicated herself to other musical genres ranging from jazz to tango to ethnic music: with the VERTERE STRING QUARTET, a formation that includes numerous projects and collaborations with well-known jazz musicians such as Javier Girotto, Marco Tamburini, Daniele Di Bonaventura, Paolo Fresu, Achille Succi, Robertinho De Paula, Michael Rosen, Stefano Onorati, Stefano Paolini. With the Vertere String Quartet has released the following CDs: "NAHUEL" (2007) ed. Il Manifesto alongside the saxophonist Javier Girotto, "COLORIADE" (2007) ed. Dodicilune with the "Pasquale Mega Emsemble", "SINE NOMINE" (2010) ed. Harmonia Mundi with the bandoneonist Daniele di Bonaventura, "VERA CRUZ" (2011) ed. Dodicilune with guitarist Robertinho De Paula and "CONTEMPORANO IMMAGINARIO" (2011) ed. Note Sonanti with Marco Tamburini and Three Lower Colors.
She was part of the MIRKO SIGNORILE QUINTET, with whom he made the CD "MAGNOLIA" and several concerts. From 2000 to 2005 she collaborated with the ethno-pop group RADIODERVISH, performing concerts and participations in important festivals in Italy and abroad (Paris-Olympia theater, Beirut, Brussels, Athens, Rome Concert of 1st May, Auditorium Parco della Musica Rome, Ravenna, Imola, Turin, Milan, Carrara, "Arezzo Wave festival", "Friuli Folkest 2002", Sanremo "Tenco Award", "Mantova Festival", Ancona, Catania, Palermo, Agrigento, Bari etc.). With Radiodervish she has also made numerous concerts with the participation of the Israeli singer NOA and has released three CDs "IN ACOUSTIC", "CENTRO DEL MUNDO" and "IN SEARCH OF SIMURGH". The prestigious "CLASSIC VOICE" magazine mentioned her among the hundred artists who most distinguished themselves in the concert seasons of 2009 and 2010.
She is the winner of the GLOBAL MUSIC AWARDS 2019 for the performance of the "Tres Preludios Tanguìsticos" for cello solo (dedicated to her) on the CD "CANTO POR EL AGUA" by the Argentine composer Miguel Bareilles.
She is a cello teacher at the "N. Piccinni" Conservatory of Music in Bari.

Born in 1969, Marco Nodari started his studies of Composition at the Conservatory of music of Brescia with the professors G. Facchinetti, E. Brusa and P. Ugoletti, and graduated in Milan with the Professor A. Corghi. He also studied piano with the professors U. B. Michelangeli, R. Pinelli and R. Bettini, and graduated from the Conservatory of Mantova. Being interested also in non-musical subjects, in 1999 he graduated in Architecture at the Polytechnic of Milan. In 2009 he specialised with honours in Composition at the Conservatory of Brescia. He attended specialised courses (“Livorno Music Festival”/M°P. Maxwell Davies, Fondazione “ A. Toscanini” of Parma, Civic School of music of Milan/M°A. Guarnieri, “ Seminario di tecnica e riflessione compositiva”/M°A. Giacometti, Music for movies/Accademia Chigiana/M°E. Morricone) and he was awarded prize in many national and international competitions (1st prize at the “First Young composers selection” organized by Radio France in collaboration with Suvini Zerboni Editors, 1st prize at the International competition “ Val Tidone”, 1st prize at the National competition A.Gi.Mus, 1st prize at the National competition “ R. Toscano” of Pescara, Finalist at the International competition City of Nizza, 2nd e 3rd prize at the National competition City of Pavia, recognized at “ Bacchelli” of Livorno, 3rd prize at “ F. Margola” of Brescia etc.). His music has been performed by eminent musicians (including M. Zoni, L. Prandina, G. Tampalini, S. Vebber, M. Marzi, G. Baldocci, F. Lama, N. Bogdanov, M. Scilironi, S. Pisciali, G. Artunghi, A. Pianelli, G. Pirollo, M. Grisanti, S. Marrini, Dedalo Ensemble etc.) and has been played in important classical events and seasons (Concerts season/ Metropolitan Theatre/Tokyo,“ Altre mete”-OFT Torino, “ Armonia e incanto”- Orchestra Haydn di Trento e B., Festival pianistico internazionale “ A. B. Michelangeli”, Stagione della Societa Filarmonica di Trento, Saison musical de Radio France, “ Sulle ali del novecento”, “ Alfeo Gigli”, Stagione A.Gi.mus, “ Sardegna Isolafestival”, “ Scintille di musica”, “ Bresciachitarra”, “ Musica in Abbazia”, Stagione di Concerti Cortina d’Ampezzo, 20° Ciclo de Organo J. De Sesma etc.) in many places both in Italy and abroad (including Tokyo, Parigi, Berlino, Roma, Firenze, Bologna, Basilea, Kiel, Mainz, Nizza, Perugia, Todi, Pescara, Gorizia, Bologna etc. as well as in the Italian Institutes of Culture of Brussels, Stuttgart, Grenoble, Cologne, Wolfsburg, Hamburg, Beirut, Tripoli). He has published works with editors such as Suvini Zerboni, Fone, Rugginenti, Ludo, Berben, Armelin, Eufonia and Concertoclassics/Musicmedia. In 2006 the 43° International Piano Festival “ A. B. Michelangeli” has commissioned him a piece for ensemble dedicated to the Victims of Piazza della Loggia of Brescia. In 2013 he recorded a Cd completely dedicated to his piano music compositions in collaboration with Eufonia Editions (“ Appunti di viaggio”/N. Bogdanov, M. Nodari, piano) and in the same year the piece for guitar named “ Tiliguerta” it’s been included in “ Strong Emotions on classics Contemporary music”, a Cd by the “ Concerto/Musicmedia” Editions (G. Tampalini, guitar). In 2014 the Conservatory of city of Potenza has commissioned him a piece performed in a live recording at the RAI studios of Rome. In 2015 a monographic Cd dedicated to his chamber music its been made for the “ Concerto/Musicmedia” Editions of Milan. He has taught Harmony and Analysis at the “ G. Martucci” Conservatory of music of Salerno, “ G. da Venosa” of Potenza, “ N. Piccinni” Conservatory in the city of Bari. Currently he is teaching Theory of Harmony and Analysis at “A. Buzzolla” Conservatory of Adria and he is director of the editorial series “Analisi&riflessioni” (www.aldebaraneditions.com); he also has been for seven years the artistic director of the classical music season “ Sundays in music” in Brescia.

Paolo Coggiola was born in Milan in 1967. He studied with Bruno Bettinelli, Franco Donatoni and Paolo Vaglieri, graduating in composition, choral music and choir direction, as well as graduated in law.
He was the winner of the 2 Agosto International Competition in Bologna. His compositions were performed by Arena di Verona Orchestra, I Pomeriggi Musicali, Emilia Romagna Symphonic Orchestra Arturo Toscanini, European Symphony Orchestra, Sentieri Selvaggi at International Art Gallery of Montepulciano, Teatro alla Scala in Milano and into the Bang on a Can Marathon in New York.
He wrote two monographs on Franz Schubert and Claude Debussy published both by Skira-Corriere della Sera. In addition for Sonzogno he has published a book about compositional techniques, The Abacus and the Rose. His extensive catalogue of compositions is published by Casa Musicale Sonzogno and Preludio Edizioni.
He teaches composition at Civica Scuola di Musica Claudio Abbado (Milano).