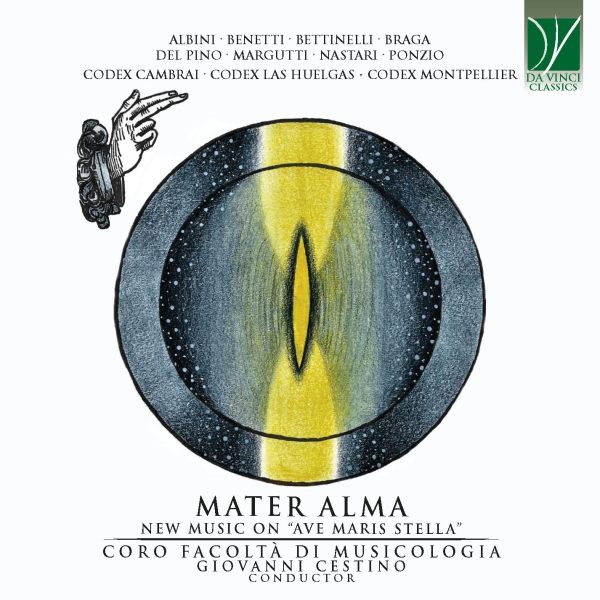 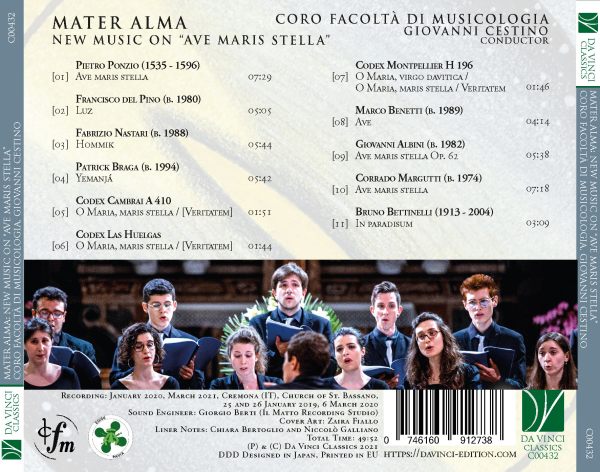 This recording stems from a project centered on Ave maris stella (Hail, Star of the Sea), in which new settings of this well-known hymn from the Middle Ages were commissioned to five composers from different countries (Italy, Argentina, and the US). The new works are presented here alongside musical gems from the extant repertoire. The hymn, probably attributable to Venantius Fortunatus (6th/7th century) or perhaps to Paul the Deacon (8th century), is a prayer to the Holy Mary greeted as the Sea Star, a bright light that directs the uncertain sailing in life’s darkness to a safe harbour. The hymn entered the liturgical canon as part of the Vespers in the Marian feasts, and has longly fascinated composers from all times. For that reason, the album has been titled Mater Alma, i.e. “life-giving Mother”, both an epithet of Mary in the Latin text, and a metaphor of the hymn’s power of inspiring new music – sometimes beyond the original musical or poetic material.

Nevertheless, the plainchant melody of the hymn often works as an explicitly structural element, as happens here in three settings. One of them, by the Renaissance composer Pietro Ponzio, aptly opens the entire record. Like his fellow contemporaries, he wrote three original polyphonic stanzas – strictly based on the Gregorian melody – which alternate with the remaining stanzas in plainchant. Ponzio’s stanzas have been taken from the only extant printed edition (published 1596 in Venice), while the Gregorian melody has been derived from a specific hymnal used in Parma Cathedral, where Ponzio served as a choirmaster. This hymnal was compiled in the 14th century but was still in use during the 17th century (I-PAac, AC 5, ff. 80v-81v).

As Renaissance musicians attributed a central role to plainchant in compositional practice, the same is found in Ave maris stella Op. 62 by Giovanni Albini. The composer’s mathematical approach establishes the premises for beauty to take place. Many pieces of his result from a pre-ordered mechanism applied to a given musical material, and this work is no exception. Albini starts from a simple bicinium of the female voices, geometrically carved out from the hymn melody, and repeats it unaltered for every stanza while always changing the key (beginning with three flats and ending with three sharps). What results is an “optic transformation” that from an initial disfiguration of the melody restores its perceivability by the first tutti. In the following section, where the bicinium goes to the male voices, the transformative process is then re-opened, before ending with another tutti that restates the melody in its original form.

A thorough borrowing of the hymn, though with an alternate melody, appears in Marco Benetti’s Ave, for four soloists and eight-part choir. The structural function of the hymn is here reversed from a ground material to a forefront element. Parceled out in fragments declaimed by the soloists, the melody floats upon a densely chordal texture where the singers mutter shreds of an Italian Renaissance translation of Ave maris stella. The layering between the soloists and the choir mirrors the implicit hierarchy of the two texts, the first belonging to the “higher” liturgical context and the other to the “lower” devotional context. If the firsts embody the purity of the plainchant, the latter acts like an hundred-mouthed vocal organism that reflects Benetti’s research on timbral textures.

The presence of two contrasting elements links Benetti’s piece with Fabrizio Nastari’s Hommik. The title (Morning) derives from the first poem of a cycle by the 20th-century Estonian writer Juhan Smuul, who describes the beginning of fishermen’s daily life at sunrise. Although there are no religious references in the poem, the common element of the sea pairs Smuul’s poem with Ave maris stella, thus joining a poetic depiction of human life with a sacred invocation. These two elements fit together here in a chiasmus, AB form. In the first section the Gregorian melody, sung by the female voices, rises above an ostinato of the male voices declaiming the Estonian text – a reference to the regilaul singing tradition. But if the two are asynchronous at first, they then converge in the second part: the female and male voices swap their texts so that the Estonian poem is now sung on the Ave maris stella tune before leading to a resonant Amen coda.

Rather than superimposing texts in different languages, Corrado Margutti opted in his Ave maris stella to intertwine the verses of the Latin hymn with those of a short poem by Friedrich Nietzsche, Sternenmoral (Stellar Morals). In this piece (composed 2007, and for a long time part of the choir’s repertoire), the symbolic element connecting the two poems becomes the star, even if the texts are often clashing in terms of meanings. This antithesis enlivens an episodic structure in which the two poems alternate one with another. Timbral differentiation enhances the dialogical interaction, with high and low voices constantly alternating throughout the piece, and sometimes indulging in traditional musical formulas. Even if the whole music material is derived from the original Gregorian melody – yet deeply transfigured –, the piece stands out for its narrative structure, supported by the intertwining of chordal and polyphonic writing.

Luz by Francisco del Pino presents a wholly contrasting attitude. Rather than setting the text of the hymn as is, the composer used the text as a starting point for a new, original text in Spanish. To attenuate the religious meaning of the text, he extracted the words of different translations of Ave maris stella (mainly from Lope de Vega’s) and combined them with the lyrics of a popular waltz, Desde el alma, then re-arranging the whole set in alphabetical order. In this way, words are musically magnified in their symbolic potential by repeating descending melodic gestures – thus counterbalancing the A-Z “ascending” order of the text – while the harmony progressively modulates down as the piece unfolds. The result is almost a musical mantra, which becomes evident in the central section when a solo male voice stands out of choir. By mimicking musically the obsessive patterns of a rosary, the composer sought to capture a sense inherent to any religious practice in general: a focus on self-knowledge and introspectiveness as a path to spiritual development.

An even more autonomous consideration of Ave maris stella as a starting point – in this case for delving into a totally different religious context – is evident in the work of Patrick Braga. With his piece, the composer chose to explore his Brazilian heritage focusing on a traditional Afro-Brazilian devotion for Yemanjá, the goddess of the waters in the Yoruba religion. The deity was paired to the Holy Virgin (Our Lady of the Navigators) during the Christianization of African slaves and became aptly associated with Mary as the Sea Star. Therefore, the composer freely elaborated some traditional Yoruba invocations and devotional formulas, setting them with vivid choral writing that frequently explores extended vocal techniques informed by the music of C. Shaw, R. Sierra, and L. Berio. Together with an evocative and impressionistic style (like the imitation of the sea soundscape), Braga’s skilful mimicking of the local polyphonic singing enhances the overall ancestral atmosphere of the piece.

As we have seen, cultural mobility works as a fil rouge for the whole album. In this sense, the choice of a medieval Ars Antiqua motet stresses this concept even more and highlights it as an ever-present practice. The motet’s tenor (the vocalised ground voice) was taken from an organum setting the text of the gradual Audi filia – also employed in the context of Marian feasts –, while the duplum bears an original text (O Maria, maris stella), which borrows the hymn’s Marian epithet in the first verse. Three similar versions of the motet, taken from as many codices, are juxtaposed here like in a tryptic. The simplest, in two parts, is found in the Codex Cambrai A 410 (F-CA MS A 410, f. 129v), in which the duplum melody is presented in its entirety, while the tenor part had to be largely reconstructed. The second appears in the Codex Las Huelgas (E-BUlh s/n, f. 102v), a source used in the context of a Spanish female monastery – and thus recorded by a treble ensemble. The motet displays here a third voice, homorhythmic with the duplum and bearing the same text. The last version is taken from the Codex Montpellier H 196 (F-MO H 196, ff. 88v-90), where the motet appears in its most articulated version with an autonomous triplum. A meticulous textual interpretation of the original sources is paired with some specific performative choices that aim to highlight the mobility of this repertoire. Together with the alternating of male and female voices, French and Castilian late-medieval pronunciation of the Latin have been conjecturally reconstructed according to the codexes’ geographic areas, following the most authoritative scholarly findings on this subtle, yet fascinating performing feature.

After a dense exploration of Ave maris stella and its cultural reverberations, the tracklist comes to its end with a piece which seems to be moving away from the concept. This record has been a sonic sailing trip through various routes and with sometimes unexpected dockings. Just as Mary leads the sailors in their journey, the listener is led to the “civitatem sanctam Jerusalem” (the holy city of Jerusalem) where heavenly choirs sing, as the text of In paradisum states. The setting of the antiphon presented here is the last sacred work composed by Bruno Bettinelli, touchingly dedicated to his first music teacher. Imbued with turn-of-the-century harmonies, it serves as an angelic greeting to the listener, sealing the program with a peaceful ending and a metaphorical eternal rest after its circuitous musical route.

Coro Facoltà di Musicologia: The Coro Facoltà di Musicologia was officially founded in 2002 under the artistic and musical direction of Ingrid Pustijanac, who conducted the group until 2013, when the role passed to Giovanni Cestino. The group consists of students of the Department of Musicology and Cultural Heritage of University of Pavia in Cremona, and it is a student-run association. The Choir regularly performs in Italy and has visited several European countries, including Germany, France, Croatia, and Finland. Through the nearly twenty years of its activity, various joint projects and collaborations were realized with several university choirs, amateur groups, and professional ensembles and soloists. Joining choral practice with musicological research, the Choir often performs works by lesser known composers, beside mainly Renaissance and twentieth-century music. Playing an institutional role in academic life and a constant presence in the various activities of the Department of Musicology and Cultural Heritage, the Choir aims to provide its members with an enriching musical, social, and cultural experience.

Bruno Bettinelli (b Milan, 4 June 1913; b Milan, November 2004). Italian composer. He graduated in piano at the Milan Conservatory in 1931, and in choral singing, conducting and composition, studying with G.C. Paribeni and Bossi, in 1937. In 1941 he won the Accademia di S Cecilia prize in Rome and in 1955 the Busoni prize in Trieste. He began to teach theory in 1938 and harmony in 1941 at the Milan Conservatory, and he was professor of composition there from 1957 to 1979. His students included Corghi, Abbado, Chailly, Gentilucci, Muti and Pollini. He has been a member of the Accademia di S Cecilia, Rome.

His earlier music (e.g. 2 invenzioni and the symphonies nos.2 and 3) owes much of the discipline of its rhythmically clear contrapuntal lines to the neo-classical approach of Hindemith. After the subsequent harmonic and timbral experimentation of the Sinfonia breve and the Second Concerto for Orchestra, he abandoned tonality for atonal chromaticism (e.g. in Musica), and a reconsideration of Webernian principles, as in Episodi, Varianti, Studio and the symphonies nos.5–7. His exploration of avant-garde elements led him to the use of electronics, for example in Count Down; but works such as Sono una creatura, Quadruplum and Contrasti demonstrate the emphasis he has continued to place on constructive rigour and on communication with the listener.