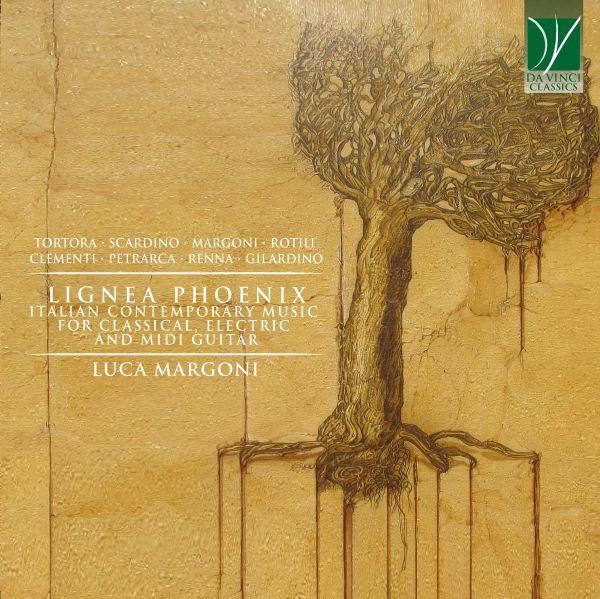 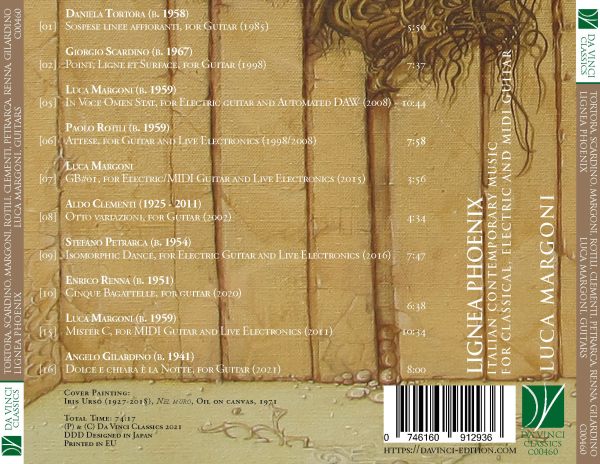 Lignea Phoenix
“Lignea Phoenix” means “Wooden Phoenix”. This is a definition that effectively captures the fate of an instrument such as the guitar which, over the centuries, has died and resurrected over its ashes, each time assuming a different shape, always renewing its expressive language.
Luca Margoni

Luca Margoni: Born in Paris in 1959 to a family of Italian intellectuals and artists, he gradually took to guitar from adolescence.
Friends, LPs and concerts have been his first teachers.
He then started his regular studies with Pier Luigi Corona, Claudio Capodieci, Stefano Cardi and José Tomás.
Deeply passionate about improvisation in all its aspects, during the 80s he studied Jazz Guitar with Umberto Fiorentino and Jazz Harmony and Arrangement with Bruno Tommaso.
His musical activity as a soloist and even more as an interpreter of chamber music, combined with a strong curiosity towards experimentation and a passion for computer science, have led him over the years to use the computer as a real musical partner.
He has therefore dedicated himself to a systematic study of the Electronic Music, both in its IT aspects, under the guidance of Stefano Petrarca, and in its compositional aspects, with Giorgio Nottoli.
All this has led him to define a path in which the guitar repertoire, above all from the twentieth century, Electronic Music and improvisation are conveyed.
He lives and works in Rome, where he settled from the age of five.

Angelo Gilardino was born in 1941 in Vercelli (North-West of Italy) where he later studied (guitar, violoncello and composition) in the local music schools. His concert career, which lasted from 1958 to 1981, had a great influence on the development of the guitar as an instrument in the ‘limelight’ in the twentieth century. Indeed, he gave premiere performances of hundreds of new compositions dedicated to him by composers from all over the world. In 1967 Edizioni Musicali Bèrben appointed him to supervise what has become the most important collection of music for guitar of the twentieth century and which bears his name.

In 1981 Gilardino retired from concert work to devote his time to composition, teaching and musicological research.

Since 1982 he has published an extensive collection of his own compositions: Studi di virtuosità e di trascendenza, which John W. Duarte hailed as “milestones in the new repertoire of the classical guitar”, Sonatas, Variations, four concertos for solo guitar and guitar groups, seventeen concertos with orchestra and fifteen works of chamber music. His works are frequently performed and recorded.

His contribution to teaching began with the Liceo Musicale “G.B. Viotti” in Vercelli where he taught from 1965 to 1981 followed by an appointment as professor at the “Antonio Vivaldi” Conservatory in Alessandria from 1981 to 2004. From 1984 to 2003 he held post-graduate courses at the “Lorenzo Perosi” Accademia Superiore Internazionale di Musica in Biella.

He has also held 200 courses, seminars and master classes in various European countries at the invitation of universities, academies, conservatories, music associations and festivals.

As a musicologist he has made a considerable contribution to the guitar repertoire of the first half of the twentieth century with the discovery and publication of important works which were either unknown or considered as lost, such as Ottorino Respighi’s Variazioni per chitarra, the Sonata para guitarra by Antonio José and a large corpus of guitar works written for Andrés Segovia by Spanish, French and British composers during the Twenties and the Thirties. Since 2002 he has edited the publication of these works (32 volumes) in The Andrés Segovia Archive, published by Edizioni Musicali Bèrben. He also reconstructed the concerto for guitar and orchestra by the Russian composer Boris Asafiev, published by Editions Orphée, and he orchestrated the Hommage à Manuel de Falla by the Polish-French composer Alexandre Tansman, left unfinished by its author. The rescue of these works and their subsequent publication has given new substance to the historical repertoire of the twentieth century. Besides, he created new settings for Guitar and Orchestra of famous items of the repertoire for solo guitar.

In 1997 he was appointed as artistic director of the “Andrés Segovia” Foundation of Linares, Spain, a charge which he left at the end of 2005.

In 1998 he was awarded the “Marengo Music” prize of the Conservatory of Alessandria. The Italian Guitar Congress awarded him the prize “Golden Guitar” three times (1997, 1998, 2000), respectively for his compositions, his teaching and his musicological research. In 2009, he was an inductee of the “Artistic Achievement Award – Hall of Fame” of the Guitar Foundation of America. In 2011 the Guitar Festival of Córdoba (Spain) entitled to him the “Jornadas de Estudio” with dedicating concerts and lectures to his works. In 2018, he received career awards from Rome Expo Guitars and from Conservatorio di Musica “Luigi Cherubini” in Florence.

He has written and published biographies of Andrés Segovia and Mario Castelnuovo-Tedesco, and two books dealing with the principles of guitar technique. He has published a handbook for the benefit of those composers wishing to write for the guitar but who are not familiar with the intricacies of this instrument. He has also published a handbook of guitar history, a volume entitled La chitarra and a considerable number of essays and articles.