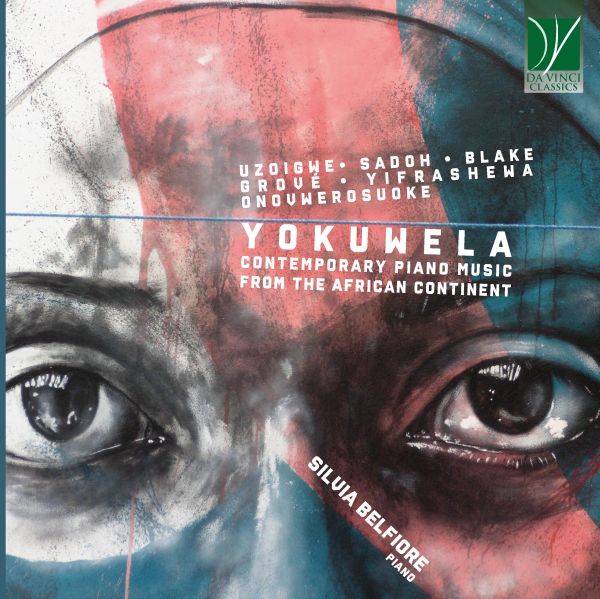 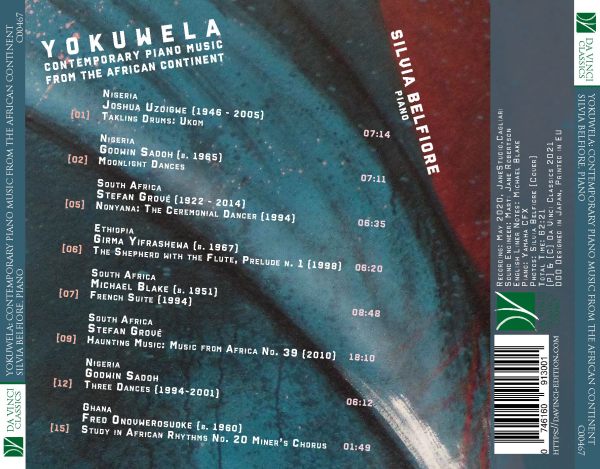 Nigerian composer Akin Euba, who developed the theory of ‘African pianism’, tells us that “Western keyboard instruments were introduced to West Africa by Christian missionaries (dating from at least the mid-nineteenth century) … Today, they are among the most common Western instruments in Africa …“1. Meanwhile the piano must have arrived in South Africa sometime earlier, since Christian Latrobe, minister in the Moravian Church there during the 1790s-1800s, mentions playing “the piano-forte” in his travel writings2. The music played on these instruments at that time would most likely have been Western classical music of the 18th and 19th centuries.

The music to be heard on ‘Yokuwela – New Sounds from Africa’ only became possible in the 20th century as a result of intercultural exchange between Western classical and African traditional music cultures. The six composers represented here – from West Africa (Nigeria, Ghana), East Africa (Ethiopia) and South Africa – provide a good cross-section of musical syncretism in “neo-African art music”3 or what Ashenafi Kebede calls “third-stream music”4. Some pieces have a greater melodic dimension (Sadoh and Yifrashewa), while others focus more particularly on rhythm (Uzoigwe, Blake and Onovwerosuoke). All these examples follow roughly in the tradition of Béla Bartók’s creative conversation with East European folk musics and could be conceptualised as examples of ‘African Pianism’, whose features Euba listed as: thematic repetition; direct borrowing – or alluding to rhythmic and tonal motifs – from traditional sources; percussive treatment of the piano; and “making the piano ‘behave’ like African instruments”. Stefans Grové’s ‘Music of Africa’ project, on the other hand, paints what he himself describes as a
romanticised notion of Africa.

Like many African composers Godwin Sadoh (born 1965, Nigeria) listened mostly to classical music as a young man, only becoming interested in popular and traditional music as a student. His compositions reflect these musical concerns: in Moonlight Dances (1984-1993) the melodies are underpinned by ostinati and syncopation, with a strong reference to ragtime in the third. The later Three Dances (1994-2001) are perhaps more contrapuntal, with specific titles alluding to traditional West African music and culture: the traditionally spirited ‘Atilogwu’ dance of the Igbo; the ‘Beggar’s Chant’ referencing a poem by Andalusian ‘Abd al-Rahman, so popular in the 16th-century, that beggars chanted it to ensure their daily bread; and ‘Yungba-Yungba’ (‘dream of sweetness’), a secret cult propagating traditional laws, where Western democracy has failed.

The piece by Joshua Uzoigwe (1964-2005), Ukom, is the first movement of a larger work Talking Drums (1992), whose other movements are Bata, Dundun and Egwu Amala. “While at the conceptual level these works have their strongest roots in my Igbo cultural background” – their themes are derived from cultural and traditional elements of the Igbo of Nigeria and neighbouring ethnic groups – ”my mode of realizing them suggests European influence in terms of tonal organisation and instrumentation”5. In terms of melody and harmony, the movement reveals a process of strict chordal relationships, the concept of which ukom players define as “the simultaneous playing of drums so that they sound with one voice or sound sweet to the ear” 6.

The Ghanaian-American composer Fred Onovwerosuoke (born 1960, of Nigerian parents) attributes his interest in music to his childhood as a boy soprano and to his high school music teacher, Sam Anyanele, who he says instilled in him a deep love of indigenous African music. From 1990 he studied music theory and composition at Principia College, Elsah, Illinois with Jim Dowcett, and has since lived in the USA. He has undertaken field work in 30 African countries, as well as the American Deep South, Caribbean and South America to do comparative research in what he calls “traceable musical Africanisms”. The Twenty-Four Studies in African Rhythms, Volume One (2007) emerged from his African research, each study inspired by a song or a dance from a different country in Africa. The twentieth in this collection, Miner’s Chorus (2008), is included here – a rather mysterious miniature, underpinned by what appears to be a jazz waltz rhythm.

Ethiopian composer-pianist Girma Yifrashewa (born 1967) is represented by his Prelude No 1 The Shepherd with the Flute (1998). A musician well-versed in the European tradition, whose recitals combine Chopin, Liszt, Scott Joplin and his own music, he explains “that his pieces are based on Ethiopian folk songs, but the European development techniques were so firmly in place that it was often hard to hear the East African elements”7. The Shepherd with the Flute is a pastoral built on a set of right-hand trills evoking the flute but also referring to the filigree quality of Chopin’s piano textures, and at the same time referencing American music in its bluesy middle section.

My own French Suite (1994) (Michael Blake, born 1951, South Africa) is closer to the aesthetic of Uzoigwe, Onovwerosuoke and Yifrashewa, than to fellow South African Stefans Grové. Martin Scherzinger, writing in the ‘Cambridge History of 20th-century Music’8, describes French Suite as one of several “understated translations of African music into Western idioms [that] deftly negotiate the borderline between quotation and abstraction, and, in the process, interrogate the opposition between the two”. The form of French Suite is loosely related to the Bach Suites, but there are only two movements, and both owe their musical genesis to Africa rather than the Baroque. The First Dance is underpinned by a chaconne-like pattern with variations in continually changing metres, interrupted regularly by a short refrain derived from Zimbabwean mbira music. The melodic material of the variations makes reference to West African kora music. By contrast, the Second Dance juxtaposes and sometimes overlays material derived from a wide range of sources including mbira music again, resulting in something analogous to cinematic jump cutting. The instrumental writing derives from both 18th-century French harpsichord music and early 20th-century French piano music.

Like all the composers on this disc, the piano played a central role in the output of Stefans Grové (1922-2014). He became interested in indigenous African music in the 1970s, though he only started composing his ‘Music of Africa’ series in 1984, following an “epiphany”: he heard a roadworker singing a traditional worksong. Perhaps unlike the other African composers on this album, the surface of his music does not readily show the imprint of Africa; rather it is submerged beneath the virtuosic piano writing. His engagement with African music seems to be one of evocation – as he has said “I think in terms of images”9 – though he does use certain African scales and his textures sometimes imitate bow music, drumming, and African birdsong.
So Nonyana, the Ceremonial Dancer (1994) (nonyana lit. meaning ‘bird’) – ‘Music from Africa No 12’ – is, in Grové’s words, “an energetic figure dressed in a cloak of blackened bark-fibre and a scarlet-bean head-dress topped with ostrich feathers”10 who is central to the domba – the dancing ceremony of the Venda circumcision school. Grové wanted to evoke the Nonyana’s role in the ritual of the ‘Python Dance’ which incorporates many different mimetic movements, some slow and mysterious, others vigorous. The other work by Grové, Zauberhafte Music (2010) – ‘Music from Africa No 39’ – was written for Silvia Belfiore some 16 years after Nonyana . This ‘Haunting Music’ seems to emerge from a much broader cultural perspective, summoning up images far beyond the African continent: here he evokes a “strange valley of mists”, “an enchanted forest”, or the myth of the poltergeist, images perhaps from German folklore and poetry.

Silvia Belfiore graduated in piano from the Conservatory of Alessandria with Massimo Paderni. She has a Degree with maximum marks in Musicology from the University of Bologna followed by various courses of specialization with Szidon, Kontarsky, Micault, Damerini, Masi, Gottlieb, Celibidache and Rattalino. Actually, in Paris, she's involved in a Master in the Universitu Paris 8, Music Department (prof. Antonio Lai), with the thesis: Écriture et oralité dans la musique africaine actuelle. Compositeurs contemporains de l’Afrique sub-saharienne du nord-ouest.
After winning a scholarship, she participated in “Ferienkurse fur neue Musik” in Darmstadt in 1986, 1990 and 1992. She has also received various awards for her artistic achievements. She recorded for the state television in Moldavia, Globo television in Brazil, Bavarian Radio and RaiRadio3. She recorded 12 CDs as a piano soloist and in chamber formation with a classical and contemporary repertory. Because of her talents and interest in new music, many composers (Helmut Bieler, Mauro Bortolotti, Aldo Brizzi, Nicola Cisternino, Aldo Clementi, Gianvincenzo Cresta, Giorgio Ghisetti, Stefan Grové, Horst Lohse, Martin Kürshner, Diego Macías Steiner, Fred Onovwerosuoke, Biagio Putignano, Godwin Sadoh, Gerardo Tristano, Anatol Vieru, etc.) have dedicated their works to her.
She’s also involved in research and census taking of musical assets for the “Istituto per i beni musicali in Piemonte”.
She teaches piano at the Conservatory ‘Vittadini’ in Pavia as well as hold workshops and masterclasses at various institutes, music schools and universities in Italy, Portugal, Brazil, California, Ivory Coast, Spain, Tanzania, Togo.
For her interest in the most varied forms of expression and artistic collaboration, she has had more than 500 concerts as a soloist and in chamber formation in Brazil, Ethiopia, France, Germany, Greece, Hungary, India, Italy, Ivory Coast, Kenya, Mexico, Moldavia, Peru, Poland, Portugal, Romania, South Africa, Spain, Switzerland, Tanzania, Togo, United Kingdom, United States.
Since 1998 she has been the artistic director of “Omaggio a…” an international festival of contemporary music in Acqui Terme (Italy).