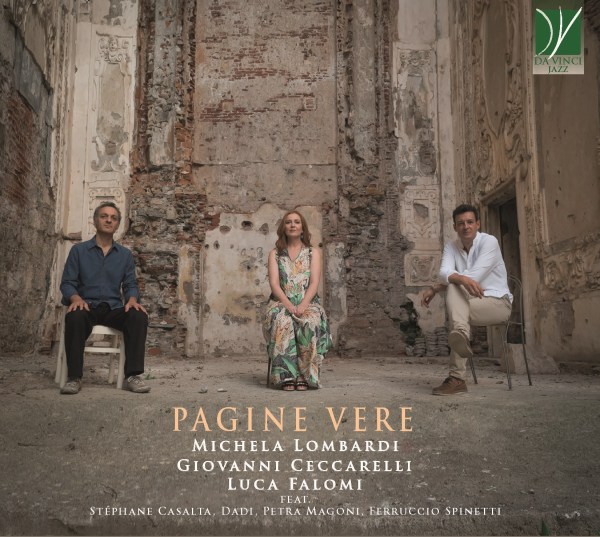 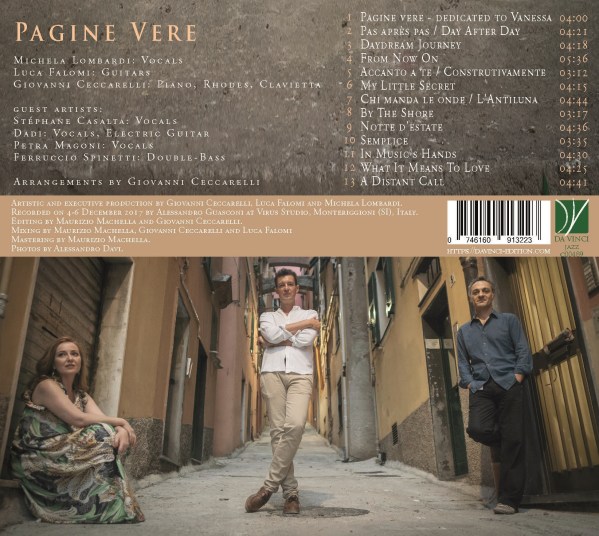 Pagine Vere was born from the artistic collaboration between pianist and composer Giovanni Ceccarelli and singer and lyricist Michela Lombardi. The two artists have been working together for years, with the aim of creating a repertoire of original music. Michela Lombardi is an accomplished performer of rare musical sensitivity, with illustrious collaborations as singer and songwriter, such as those with Phil Woods and Burt Bacharach. Giovanni Ceccarelli has released thirteen albums under his own name and has been nominated for the Latin Grammy Awards. While recording the album “Animantiga”, Giovanni meets and collaborates for the first time with guitarist Luca Falomi, an artist who brings into this project his very fine and delicate musicianship. Pagine Vere‘s repertoire also includes lyrics by Max De Tomassi, Stéphane Casalta, André Carvalho and Ciara Arnette. The group’s music features lyrics in Italian, English, French, Portuguese and Corsican.The three musicians invited some special guest artists to join them in the recording of this album: Ferruccio Spinetti and Petra Magoni from duo Musica Nuda, Brazilian multi-instrumentalist and producer Dadi, Corsican singer-songwriter Stéphane Casalta.

Luca Falomi is trained in classical music and has a vivid, incisive and silvery touch in his right hand and meandering deftness in his left hand. Still every song he has composed clearly shows it is heartfelt and comes from a place that is nobody’s and everybody’s land at the same time, a place where every music culture has thrived and brought fragrant contributions to jazz. The keystones supporting the framework of sound have been the same for the last five hundred years nearly all over the world, the tangle of notes that we might define Afro-Mediterranean and the ones which, arising from there, later simply and naturally became Caribbean Afro-American and Latin-American notes. Jelly Roll Morton said one century ago that the essential ingredients of jazz are creativity, surprise and an expert sprinkling of “latin tinge”.

Michela Lombardi is among the top ten Jazz Vocalists in Italy according to the “Jazzit Awards 2011”, and for many years she is mentioned in the “Best Voice” section of the Italian magazine “Musica Jazz” Top Jazz polls. She receives three nominations at the Italian Jazz Awards. Michela has a varied background of musical experiences (both as a vocalist and as a lyricist in English) between Italy and the United States. Her approach to singing is based on sober, semi-refined jazz vocals, with a distinctive expressiveness capable of bluesy and soulful shades with a flowing scat. Since 1999 she records over fifteen records, two of them with the Renato Sellani trio and two with legendary saxophonist Phil Woods, both as a singer and lyricist for Woods’ compositions (“Michela Lombardi & Phil Woods Sing & Play The Phil Woods Songbook” vol.1 & vol.2, Philology, 2010). Her album “Live To Tell” (released by American label Dot Time Records in 2017) is recorded together with the Riccardo Fassi Trio and features a full set of re-imagined music first recorded by pop icon Madonna, featuring special guests Steven Bernstein and Don Byron. Her latest work, “Shape Of My Heart – The Music Of Sting” (Atlantis/Saifam, 2019) is recorded with Piero Frassi, Gabriele Evangelista and Bernardo Guerra. She signs a song together with Burt Bacharach (“Un Domani Per Noi Due”, the official Italian version of “How The Heart Knows”). She has been teaching vocal jazz in many Italian conservatories, and performing in important venues such as Tel Aviv Opera House, Duc Des Lombards (Paris), The Music Village (Bruxelles), Jazzahead (Bremen).