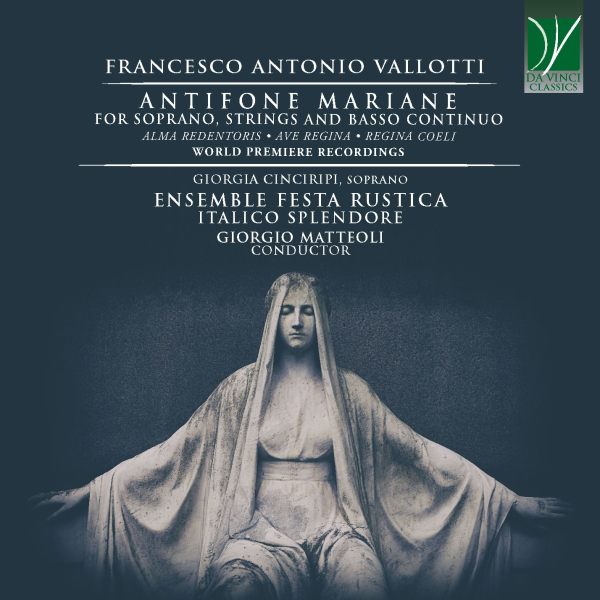 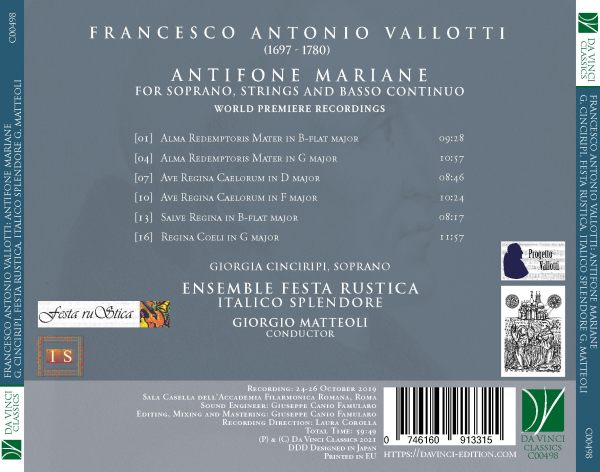 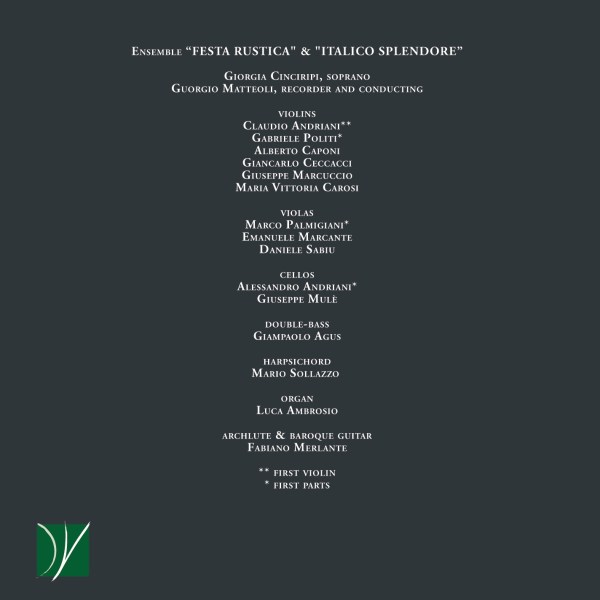 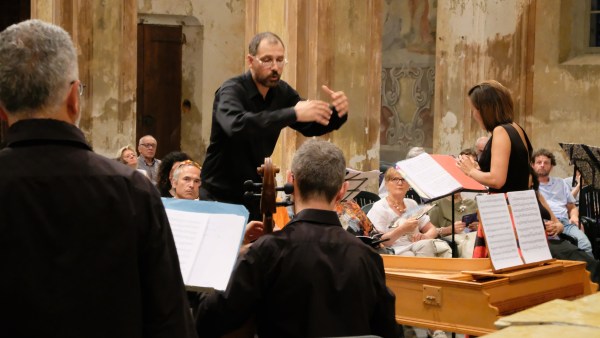 Vallotti and the composition of the Marian Antiphons for soprano, strings and continuo

GIORGIA CINCIRIPI
Giorgia studied at “G. Braga” Conservatory in Teramo, where she graduated with full marks and then she continued second level studies at the “L. D’Annunzio” Conservatory in Pescara, and the second level studies in baroque music at the “A. Casella” Conservatory in L’Aquila and she graduated magna cum laude. After the graduation she refined her skills with some important sing teachers: William Matteuzzi, Claudio Desderi and Fernando Cordeiro Opa. Guided by the soprano Roberta Invernizzi she focused her attention on baroque repertoire and she attended also some masterclasses with Sara Mingardo, Gloria Banditelli and Sonia Prina.
She graduated magna cum laude in History, Arts, Music and Entertainement at the University of L’Aquila discussing a thesis about Craziness in Dramas and Operas.
Giorgia won the competition instituted by Piccolo Festival del Friuli for the opera La Cecchina, ossia la buona figliola of Piccinni that was been conducted by M° F. Bressan and staged by E. Marini in Udine. She plays the role of Maddalena in the oratorio La Resurrezione of Haendel in a famous baroque music festival in Royaumont (Paris) with the orchestra “La Risonanza” conducted by F. Bonizzoni.
She sang the following operas: Semele (Ino and Cupid) of Eccles in the Festival Oude Muziek in Utrecht conducted by F. Bobizzioni, Aci, Galatea e Polifemo (Aci) of Haendel and Dido and Aeneas (Belinda) of Purcell in the festival La Rocca Barocca with the orchestra Gli Archi del Cherubino; Così fan tutte (Despina), Don Giovanni (Zerlina), Le Nozze di Figaro (Barbarina) of W. A. Mozart with the Orchestra di Padova e del Veneto conducted by C. Desderi at the Theatres of Padova, Portogruaro and Vittorio Veneto (Venice); Eurilla e Alcindo of A. Vivaldi (Eurilla) conducted by A. Ciccolini at the Rossini Theatre in Pesaro; Paride and Elena of C. W. Gluck conducted by F. M. Bressan and staged by Andrea Cigni at the Verdi Theatre in Pisa, at the Goldoni Theatre in Livorno, at the Giglio Theatre in Lucca and at the Royal The Wallonie in Liegi; Semele (Iris) of Haendel with the baroque ensamble Les Nations and staged by Thomas Zip. Specialized in Opera Buffa of the eighteenth century, she played the main roles in: Le finte gemelle of N. Piccinni, La Serva Padrona and Livietta e Tracollo of G.B. Pergolesi, Filosofo di Campagna of B. Galuppi and La Fantesca of A. G. Hasse.
She sang also sacred repertoire’s compositions such as Mozart’s Exsultate Jubilate, Pergolesi’s Stabat Mater, Vivaldi’s Gloria, and Haendel’s Messiah and Dixit.

ITALICO SPLENDORE
The love and interest for the ancient music and the baroque, classical and preromantic repertorie, are the basis around which the Italico Splendore Ensemble was born and grew up; from the very beginning, in 2010, it conducted its work mainly in this direction: a constant and deep research on the sources and a scrupulous philological method.
The aim of the members is to do a research work in order to revalue less popular repertoires, to rediscover unknown authors, operate on ancient manuscripts, giving new life to hidden musical treasures regarding a period of a great splendor of the Italian musical art, source of pride in the European courts.
The musical production has already been expressed by a regular concert activity at important musical seasons and festivals, and also by the achievement of recording projects for labels such as Dynamic, Brilliant Classics and Novantiqua Records. All members cooperate in total harmony, bringing their human and professional contribute, besides the artistic one, under the guide of the artistic director Alessandro Andriani and his brother Claudio, violin concertmaster.
All members, following the study of performing practice indicated by the treatises and essays of the period, play on original or authentic copies of instruments of the period, using gut strings, philological bows, historical keyboards and original wind instruments, in order to reproduce accurately the sound effects required by the composers.

Francesco Antonio Vallotti
(b Vercelli, Piedmont, 11 June 1697; d Padua, 10 Jan 1780). Italian composer and theorist. He was enabled by Padre Beccaria, superior of the Franciscan monastery of S Eusebi (the cathedral of Vercelli), to study with G.A. Bissone, maestro di cappella at the cathedral. His scores dated 1710 and 1712 demonstrate a thorough schooling in composition. An interest in theology and philosophy led him to further studies; at the age of 18 he visited Chambéry to join the Franciscan order, and he then spent a year in Crest (Dauphiné) where he took vows on 16 December 1716. By special dispensation, on account of his youth, from the Bishop of Saluzzo, Vallotti was ordained priest on 7 July 1720, after a period of study in Cuneo under the philosopher Castellani the elder. In 1721 Castellani sponsored him in a public debate possibly in Milan where he went to study with the theologian D.F. Donati; Donati moved to Padua and Vallotti followed him, arriving on 6 November 1721.