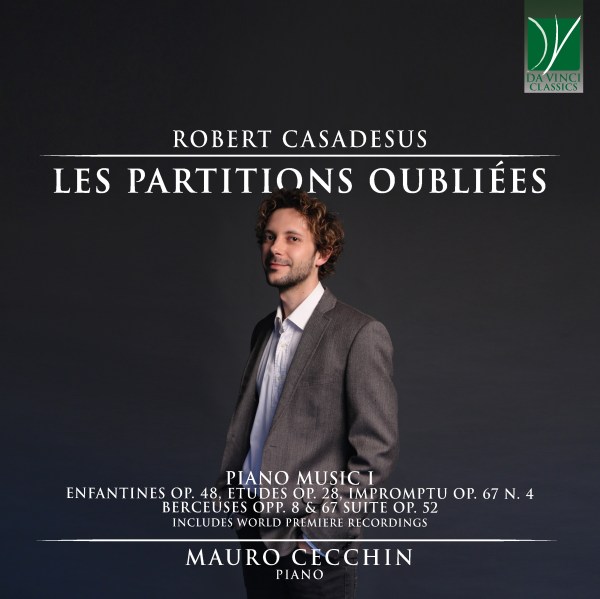 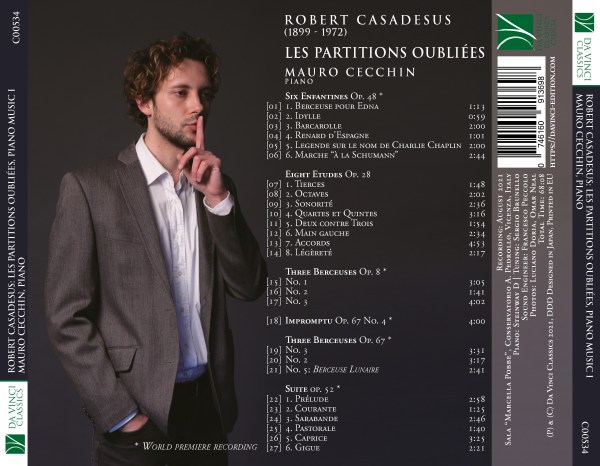 The idea of collecting in an album some hitherto unrecorded works by Robert Casadesus results from my aim to bring to light the wonderful music by this composer, whose fame as a creator was overshadowed by that as a pianist.
Born in 1899, after obtaining his diploma at the Paris Conservatoire, Robert Casadesus cooperated with composer Maurice Ravel writing the catalogue of the latter’s works, and he gave recitals, sharing the stage with his friend, in France, Spain and England. Many recordings document his concert activity and his art, while recordings of his work as a composer are scanty. He wrote numerous pieces for solo piano, for ensembles, for voice and orchestra. A refined interpreter of French classicism and impressionism, he frequently played in duo with his wife Gabrielle L’Hôte (aka Gaby), and also with his son Jean: for them he wrote works for two or three pianos. He taught for many years at the American Conservatory of Fontainebleau, and he lived in America during World War II.
The imprint of Casadesus’ pianism, his story, his large family of artists and his historical context are clearly mirrored in his works. As a pianist, he had uncommon mastery of technique and sound, as well as a deep knowledge of polyphony and of the style and sense of form. Therefore, starting from Classical, Baroque, and Romantic forms, this composer unchained his creative energy, inserting, within “cultivated” music, at times some very interesting folklike elements, at times citations from the art music of other composers.
Also as regards the research of sonority and the use of pedal, an interesting interpretive key for Casadesus’ own works comes precisely from listening to his performances, in particular as concerns the works by Debussy and Ravel. Pentatonic scales, an abundant use of parallel fourths and fifths (to which he dedicates one of his Studies), sensitivity and care for the detail as concerns dynamic and agogic indications: all this leads even the most daring harmonies not to become mere effects, but rather to insert themselves and to find their motivations within a long-duration sonorous context. This brings us to deduce the French composer’s clear comprehensive vision and his ability in the management of form.
This composer was fond of monothematicism as a technique: even one single melodic cell could become the thematic material of an entire piece. A thematic cell, as is natural, expresses a concept. The choice of the notes composing it constitutes its essence. Indeed, in some pieces, the letters of the dedicatee’s name become the theme.
His studies are not mere technical exercises: just as the lyrical pieces, they require particular attention to the sound, listening to harmonies, and a careful use of pedals.
In all works by Casadesus contained in this album one finds, alive, Robert the pianist, the virtuoso, the artist.
This all required from the performer an uncompromising precision and awareness of the composer’s style (not only as a composer but also as a performer), as well as a humble and faithful approach to the text. This frequently displays very precise indications; however, beyond them, there is much more content one should analyze, synthesize, interpret.

Six Enfantines
These are six educational pieces for children, written in 1955 and dedicated to his daughter Therese, born some years earlier, in 1942. They are very different from each other. They are all very characterized, fanciful, and rich in indications both in Italian and in French. These may be common or particular ones, such as the interpretive suggestion “Poules d’Espagne” (“Spanish chicken”) in no. 4, Renard d’Espagne (The Spanish Fox).
In no. 5, Légende, the theme’s notes are connected to the letters of the family name CHAPLIN, which are cited in written form every time the theme reappears.
In no. 6, inspired by Schumann (Marche “à la Schumann”), the TRIO bears the indication “à la Prokofieff”.

Etudes op. 28
This collection of eight musically interesting studies was published in 1941. Thanks to their disposition and individual traits, they somehow form a complete cycle, even though they are very different from each other.
The second Etude, about octaves, has the indication “Allegretto a capriccio”. It is characterized by a reminiscence of tango and of Latin-American music, consisting in the accentuation of accompaniment, rhythm, and harmony.
The third Etude, Sonorité, is a slow one, with the indication “Comme une berceuse”; in its second part, it is marked “comme un carillon lointain”. It is dedicated to Claude Pasquier, a pianist, the son of famous French artists linked to the American Conservatory of Fontainebleau. The letters of CLAUDE and PASQUIER form themes which are proposed throughout the piece by all voices, many times, even in retrogradation, inversion or with doubled values. At every repetition of the theme (with the original notes, untransposed) the letters are written.
The fourth is a virtuoso Etude on fourth and fifths: this technique is rarely treated in the repertoire of Etudes, but abundantly experimented by French impressionist composers. In turn, Etude no. 5 is also typically impressionist in its colours.
The seventh Etude has the indication “In modo di Sardana”: this is a Spanish dance loved by Casadesus who proposed it also in others of his works. The composer makes use of the rhythmical play and structure of this dance.

Berceuses op. 8
Published in 1932. Their style is reminiscent of French impressionism, with evident influences of blues in the harmony of no. 1, dedicated to his son Jean, born in 1927.
In the third Berceuse, an interesting element is the superimposition, over the musical fabric in 6/8, of a French folk melody in binary time, played carillon-like at the soprano. It is a children’s song by the title “Ainsi font les petites marionettes” (“So the little marionettes do”).

Impromptu and Berceuses op. 67
No. 1 of op. 67 has never been published; the entire work appeared posthumously. In this album, the three Berceuses (op. 2, op. 3 and op. 5) have been grouped and disposed in the order in which they were proposed in the original edition, which does not include the Impromptu (no. 4), published in a separate volume.
The Impromptu was written in 1968, and is dedicated “à la memorie de Dinu Lipatti”. It is entirely written employing the initial thematic cell of four notes, whose characteristic feature is the intonation of a descending second.
The three Berceuses, very different from those of op. 8, date back in turn from the last years of the composer.
The first has the indication “Tempo di Sardana”, just as Etude no. 7, and is structured in the same fashion. It is dedicated to Antoine Casadesus. Every letter of the name ANTOINE and ANTONIO corresponds to one note. The same applies to the second, dedicated to Nathalie Wellers (the themes are NATHALIE and NATACHA), and to the third, dedicated to Carter Casadesus Rawson (CARTER and RAWSON). The letters are written above the notes at each repetition of the theme.
The third Berceuse has also another particularity. Along with the dedication to his grandson, it bears the commemoration of the moon landing which happened on the same day: thence comes the choice to cite also the tune of the American anthem.

Suite op. 52
Written in 1956, it is structured as a Baroque Suite, in a single key with Courante, Sarabande and Gigue. From the rhythmical and structural viewpoint they respect Baroque canons, without however having the traditional repeats. The Allemande is missing; at its place is found a Prelude built on a four-notes melodic cell, evolving throughout the piece. In the Préludio, as in an overture, there are also allusions to the following dances. The Courante follows, with passages creating the illusion of transitioning from ternary to binary time; then there is a piece called Pastorale. A Caprice with a jazzlike character follows, with an interesting rhythmical superimposition of the left hand (in triple time) and of the right (in quadruple time). The cycle is closed by an imitative Gigue.

MAURO CECCHIN
Italian pianist and teacher born in1989. He started his studies very early with Enrico
Anselmi and he held his first soloist concert at the age of 13. Since the earliest years of
study he performed in the reviews of the young soloists of Vicenza Conservatory (Italy)
and was included in some TV shows. In 2008 he graduated with honors at the Vicenza
Conservatory of Music where he had the opportunity to study composition, improvisation
and to attend many piano masterclasses. In the same year, he won a scholarship for
a course of specialization in Florida as the best graduated student of Vicenza Conservatory.
To improve his academic path, he decided to move to Moscow to attend a piano
masterclass with I.Plotnikova at the leading State Conservatory P.I. Tchaikovsky of
Moscow where he was admitted to the following academical year. He studied in Russia
for six years and he graduated with the top marks and honors in 2014 under the guidance
of Prof. Ruvim Ostrovsky. In this period, he was included many times in the concert
reviews of the best students of the Moscow Conservatory. During his career, he obtained
several reports in the Italian and international press and he won several national and
international competitions.
He performed in many countries all around the world as soloist but also in chamber
ensembles and as a soloist with orchestra. His repertoire, which ranges from the Baroque
to the 1900s, is in continuous evolution and his activity is aimed at the diffusion of music

Robert (Marcel) Casadesus
(b Paris, 7 April 1899; d Paris, 19 Sept 1972). Pianist and composer, nephew of (1) Francis Casadesus. He studied at the Paris Conservatoire, where he won a premier prix in the class of Louis Diémer in 1913. He also won a premier prix in the harmony class of Xavier Leroux in 1919 and the Prix Diémer in 1920. In 1922 he met Ravel, who invited him to make Duo-Art piano rolls of some of his pieces and to perform with him in concerts in France, England and Spain. He formed a notable piano duo with (5) Gaby Casadesus, whom he married in 1921. As a soloist he toured Europe, Africa, the USSR, the Middle East, Japan, South America, the USA and Canada. In 1935 he was appointed professor of piano at the American Conservatory at Fontainebleau, which he later directed. He also taught privately, his students including Monique Haas and Claude Helffer. From 1940 to 1945 his career was based in the USA, where he and his family resided during the war. His temperamentally restrained outlook and elegant, transparent sound made him an ideal interpreter of Ravel and Mozart. His recording of Ravel’s complete piano works remains a model, as do several of his recordings of Mozart’s concertos (conducted by George Szell) and Beethoven’s sonatas for violin and piano (with Zino Francescatti). As a composer, he left a substantial legacy of works in a neo-classical, often modal idiom, including seven symphonies, eight concertos, chamber music and piano pieces.