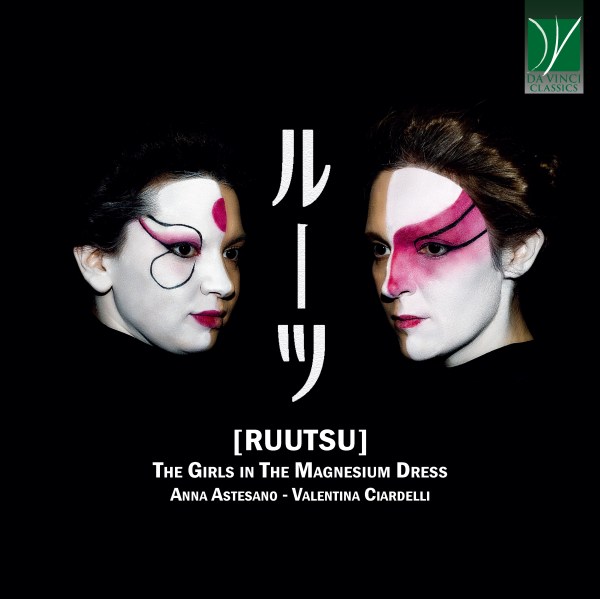 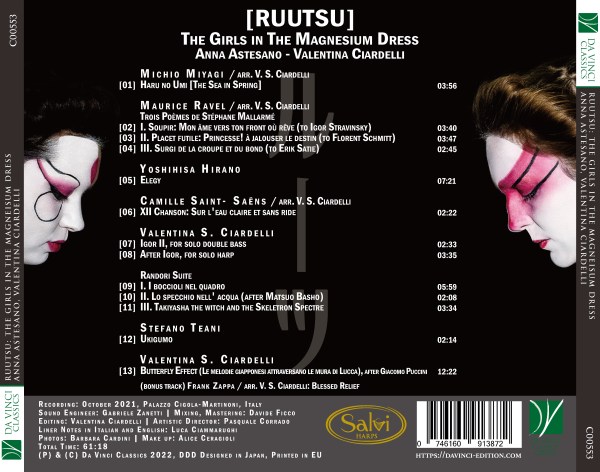 Ruutsu: The Girls in The Magnesium Dress

Anna Astesano
After her Bachelor and Master studies at the Conservatoire National Supérieur de Musique et Danse in Lyon, Anna Astesano joined the harp class at Trinity and Laban Conservatoire of Music and Dance in the Postgraduate Advanced Diploma course in London. Between 2014 and 2015 she has been harpist at “Teatro alla Scala” Academy in Milan. In June 2015 she won the audition as first harp at “Luigi Cherubini” Orchestra, conducted by Maestro Riccardo Muti. In 2018 she was the harpist of the Future Foyle First Programme, promoted by the London Philharmonic Orchestra. Since 2017 she has been awarded scholarships offered by the Turin CRT Foundation, “De Sono” Association and Turin "Lions Club". In 2018 she was awarded the "John Marson Prize for best performer" and the “Featured Young Performer” Award by the London Ear Festival, playing as a soloist and in chamber music concerts with the Uroboros Ensemble. She has collaborated with: the Royal Opera House in Covent Garden, the London Philharmonic Orchestra, the Orchestra Sinfonica Nazionale (RAI) in Turin, the "Teatro alla Scala'' Orchestra, the "Maggio Musicale Fiorentino'' Orchestra, the Kobolov Novaya Opera Theatre of Moscow, the London Southbank Sinfonia, under the baton of conductors such as Muti, Mehta, Pappano, Jurovskij, Krivine, Gatti, Luisi, Russell-Davies, Coleman. She has performed as a soloist and alongside chamber music ensembles in prestigious London concert halls such as the Purcell Room, the Queen Elisabeth Hall, St. Martin's In-the-Fields, Wigmore Hall and the British Museum. She is a Concordia Foundation and Park Lane Group Artist. Anna Astesano is the harp teacher at the "A. Scontrino" Conservatoire in Trapani.

Valentina was born in Pietrasanta (Lucca - Italy) to a German mother and Italian father. Initially a pianist, she started to play double bass in late 2009, graduating with Honours from the “Istituto Musicale L. Boccherini” in Lucca in October 2014. She then gained her Master of Performance (Honours) at the Royal College of Music in July 2016. Valentina also focused her attention on composition, graduating in March 2014 with Honours in conservatoire Giacomo Puccini in La Spezia. Valentina has won several awards and prizes including first prize in the RCM Double Bass competition 2016, the Vernon Elliot Double bass Competition 2018, the Vivian Joseph Classical Concerto Competition 2018 and the De Simone and Partners in the Chamber Music Festival in Rome. She won a place with a scholarship in the Accademia Chigiana in summer 2018 with Maestro Giuseppe Ettorre. Additionally, Valentina was a finalist in important national and international competitions such as the Migliori Diplomati D’Italia (best young Italian music graduate) 2015 and Double Bass international competition Galicia Garcia Graves. She was selected with other 16 young double bass players around the world to perform in the live final rounds at the worldwide double bass solo competition granted by the Bradetich Foundation in Denton, Texas, at the end of august 2017. Valentina also won several orchestral auditions such as the Gustav Mahler Academy 2016, BBC SO training scheme, Lucerne Festival (reserve list 2019), Southbank Sinfonia 2018 and the Gran Teatro Giacomo Puccini Torre del Lago Orchestra (Lucca). Between 2013 and 2016 Valentina has played, mainly as principal or co-principal, with several symphonic and chamber orchestras. She also has wide experience in solo performance. She recently won the Artist in Residence at BANFF, Alberta (Canada), who will host her from 15th till 28th September 2019. She gave a performance with “I Solisti Veneti” with Maestro Claudio Scimone (double bass concerto in A major by Domenico Dragonetti and the Fantasia sui temi della Sonnambula by Giovanni Bottesini) and she won the prestigious scholarship granted by this Academy (Proliber). She has performed as a soloist in the prestigious London concert halls Wigmore Hall and St. Martin-in-the-Fields. She was invited to the pre-opening of the Zappanale 2018 in St.Katharinen Kirche (Hamburg) with her Trio featuring the Worldwide saxophone virtuoso Napoleon Murphy Brock. Valentina is a young artist of Talent Unlimited (UK) and she lives and works in London. She been awarded a Junior Fellowship at the Trinity Laban Conservatoire, London for the academic year 2018/19. She also won a scholarship from associazione Animando in Lucca for a research project investigating the music of Giacomo Puccini’s ancestors and her work had been published by Da Vinci Editions. Valentina is focused to expand the double bass solo repertoire composing new virtuoso pieces, transcribing (mostly Frank Zappa’s Repertoire), playing new composition written for her from many contemporary composers such as Bernard Salles, John Alexander, Alexandra Harwood e Kurt Morgan. She also has a wide Jazz experience playing in important Jazz Festival such as Dusseldorf Jazz Marathon, Villa Celimontana Jazz Festival, Tuscia Jazz, Umbria Jazz Clinics and she got to final in competition such as Tuscia Jazz as Best double bass and electric bass player and Nicola Tiberio Awards in 2012. She plays a Scipioni doublebass 2014.

Michio Miyagi [Wakabe; Suga], [Nakasuga Kengyō]
(b Kobe, 7 April 1894; d Kariya, 25 June 1956). Japanese player of the zoku-sō (the 13-string koto) and composer. A son of Kunijirō Wakabe, he was given the family name of Suga as an infant. By the age of seven he was totally blind. He became in 1902 a disciple of Nakajima Kengyō II, a koto master of the Ikuta School; in 1903 he made his début as a solo performer, and in 1905 he received a certificate of highest proficiency in koto playing, earning the professional name of Nakasuga. Two years later he went to Korea, where he taught the koto and shakuhachi in Jinsen (Inch'ŏn) and then in Keijō (Seoul). In 1909 he wrote his first composition, Mizu no hentai, a song with koto solo which won considerable fame. He received the professional title of Kengyō in 1912; and in 1913, when he married Nakako Kita, he assumed the surname Miyagi, after which he became best known as Michio Miyagi. In 1914 he met Seifū Yoshida, who became a lifelong friend and with whom he began in 1920 the Shin Nihon Ongaku (New Japanese Music Movement), aimed at adapting elements of European music to composition for Japanese instruments. Meanwhile he had returned to Japan in 1917 and settled in Tokyo. The first concert devoted to his music was given successfully on 16 May 1919 and was followed by more in 1920 and 1921.

Yoshihisa Hirano was born in the Wakayama Prefecture of Japan on Dec.7th, 1971. Having been attracted to baroque music, he started to study composition by himself as an elementary student. He found jazz in high school. He enthused over the music of great jazz masters such as Miles Davis, Thelonious Monk, Eric Dolphy and John Coltrane. His admiration of them once gave him dreams of becoming a jazz musician, but he then discovered contemporary music. Specifically he gained interest in the works of John Zorn, one of the musicians who had the biggest influence on him in his youth. On the other hand, symphonies by Shostakovich also greatly impressed him, and helped him make up his mind to study composition seriously.
After many twists and turns, he moved to the United States. He entered Eastman School of Music in NY and studied composition with Christopher Rouse and Joseph Schwantner. Getting engrossed in books by 20th century french writers and thinkers including Bataille, Klossowski, Mandiargues and Genet, he spent most of his time reading and composing rather than attending classes.
After many twists and turns, he quit the school. He made his debut as a film composer in 2001. Thereafter he has composed a large number of soundtracks of TV shows, films and games.