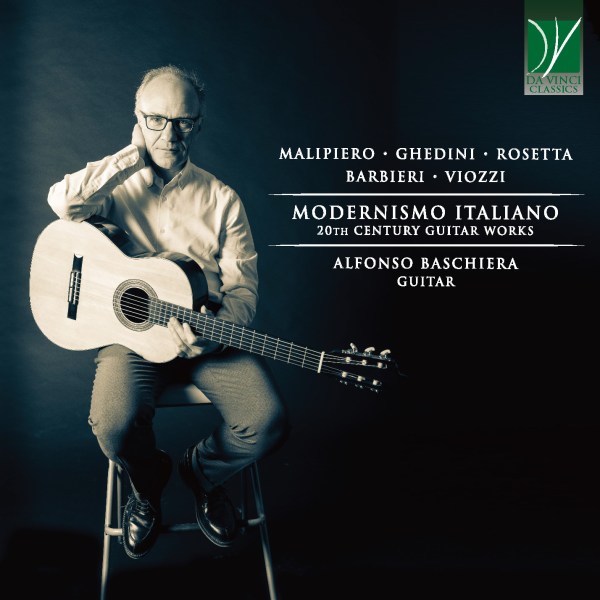 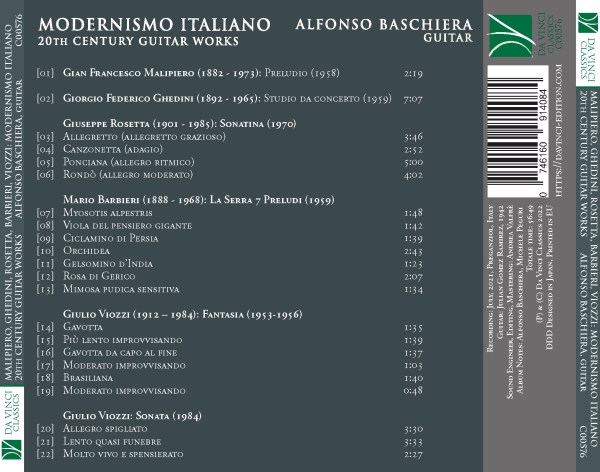 It seems therefore clear that the Più lento can only refer to a preceding movement which is, in fact, the Gavotta. What is offered here is therefore a different organization of the various movements which, with a better internal cohesion, form two blocks with a mirror-like structure:
– Gavotta – Più lento improvvisando – Gavotta da capo;
– Moderato improvvisando – Brasiliana – Moderato improvvisando.
Besides this new organisation of the various sections, we tried and respected the original writing by long values of the Brasiliana. It had been modified by the editor through rests which are very unsuited to time’s sinuous flowing:

The pace of the South-American dance is unavoidably reminiscent of the atmospheres of the ballet Le Boeuf sur le toit op. 58 by Darius Milhaud (1920), whilst the Gavotta’s neo-baroque composedness is broken by the rhapsodic impetus of the improvised sections.
The Sonata of 1984, written a few months before the fatal stroke, is a piece scarcely performed by guitarists. True, the first and the third movement suffer from a certain chromatic harshness: they are performed here with numerous added instrumental slurs and lightened repeated chords. However, the Lento quasi funebre is to be numbered among the most interesting pieces of the twentieth century. It was premiered in the cathedral church of San Giusto in Trieste precisely on the occasion of the composer’s funeral. This is a harmonically refined and deep music, the work of an old, wise man who is leaving us, knowing that his work has been good.
Viozzi, whilst remaining faithful to the traditional language, manages to weave a writing whereby the chromatic melody’s stupendous lyricism is sustained by a very refined harmonic research. The introductory phrase of six bars is a solemn and funereal rhythmical continuum. The pedal on the low E sustains a bowed profile, whose melody has a gradual and progressive ascent. The chromatic oscillations found on each bar’s final beats seem to represent the unceasing knocking of something inexorably nearing. In the central section, the touching melody is sustained by particular harmonies with a jazz-like derivation. Here are found chords of dominant seventh, where the minor and major third coexist at the distance of a diminished octave; they are also called blue chords.

The presence of the typical Tristan-chord is also characteristic; it had influenced such a great part of the music written in the past century.

After the enunciation of the second part, a melodic topos of a rare beauty, the melody majestically smooths itself out towards the final riconduzione, sweetly closing the piece, which fades on the notes of the short reprise. In the last breath of his life, Viozzi managed to sculpt a page of a rare beauty.
Alfonso Baschiera and Michele Peguri © 2022
Translation: Chiara Bertoglio

Alfonso Baschiera is an honours graduate of the Venice Conservatory. He studied with Angelo Amato and was a post-graduate student of Ruggero Chiesa. Baschiera has both commissioned and performed numerous solo works and chamber-ensemble pieces by Luca Mosca and Alessandro Solbiati. In 1990, Baschiera edited the educational collection “La chitarra oggi”, featuring works by Bettinelli, Fellegara, Malipiero, Mosca, Morricone, Solbiati and Zanettovich. Baschiera’s chamber music recordings include “Colori e Danze del Novecento”, “Cantares Populares” and the collected guitar works of the Hungarian composer Ferenk Farcas – all critically acclaimed in Italy, the UK, France, Spain and Hungary. Baschiera is the author of “The Easy Guitar” as well as editions of “Niccolò Paganini: 43 Ghiribizzi” and “Ferdinando Carulli: Guitar Works”. In 2015 the Dutch record label Brilliant Classics released a CD of Sauguet’s complete works for guitar. The recording was positively reviewed throughout Europe and was mentioned as “Best Disc of the Month” in the prestigious Italian music magazines “Amadeus” and “Musica”. Da Vinci Editions has recently released a recording of Ferdinando Carulli’s works for two guitars featuring Baschiera and Marco Nicolè.

Gian Francesco Malipiero (b Venice, 18 March 1882; d Treviso, 1 Aug 1973). Italian composer and musicologist. Although very uneven, and less influential than Casella and Pizzetti, he was the most original and inventive Italian composer of his generation.

Viozzi, Giulio
(b Trieste, 5 July 1912; d Verona, 29 Nov 1984). Italian composer. Of the Italian composers born between the ‘generation of the 1880s’ and the postwar avant garde, Viozzi has a place of special interest for the quantity and quality of his large, diverse output. At the beginning of the 1950s, he moved from an initial involvement in chamber music towards theatre and orchestral music, scoring an important and immediate double success with the comic opera Allamistakeo, performed at La Scala under Maazel and at the recommendation of Sabata, and the orchestral Ditirambo. These works made clear the personal nature of Viozzi's musical language, in which references to Straussian vitality, the folk palette of Bartók and the sonic exuberance of Stravinsky and Prokofiev are combined with a sturdy rhythmic force and, even more, the evocation of the magical and surreal. This linguistic cocktail served the composer extremely well both in opera, not only in Allamistakeo, but also in his tragic masterpiece, Il sasso pagano, and in orchestral and chamber music.