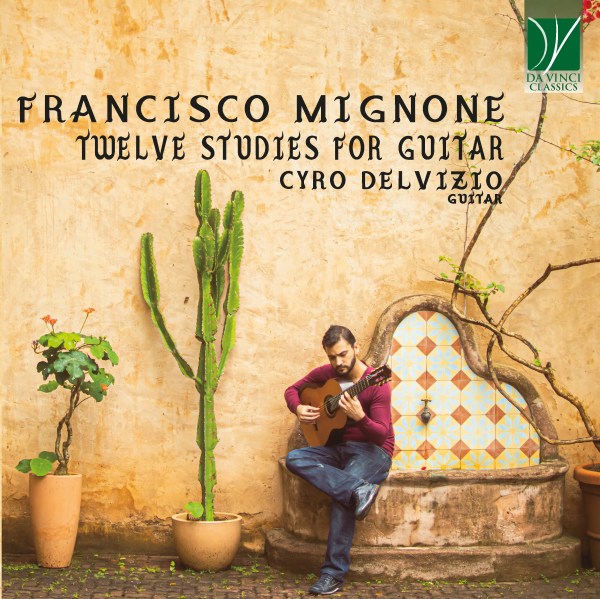 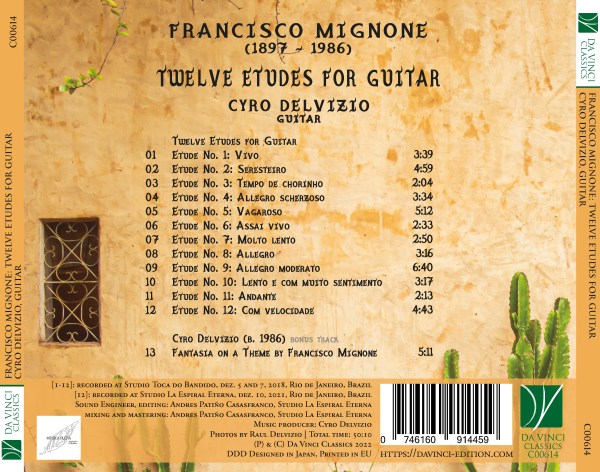 Cyro Delvizio is one of the leading guitarists, composers, and researchers of his generation. Having devoted his considerable skills to spreading Brazilian classical music to various audiences, he performed in all 27 Brazilian states (a total of 130 concerts) as part of the SESC Sonora Brazil 2013-14 Project with Duo Cancionâncias (with soprano Manuelai Camargo), an unforgettable human and musical journey.The above-mentioned Duo also won prizes as the "V Villa-Lobos Museum selection of young musicians" (2008) and "Art Circuit" (2011), sponsored by the Cultural Bureau of Rio de Janeiro, recorded independently their first CD, called "Saudades" (2013) and performed at the "Guitar Foundation of America International Convention 2016", the USA most prestigious classical guitar festival, where he also conducted classes.
As a soloist, he won first place in the "VI Selection of Young Talents of AV-Rio" (2008) and "V National guitar competition Fred Schneiter", receiving a CD recording in Mexico as an extra prize in this last one, where he made release tours in 2012, 2013 and 2014 of his first solo CD "Reminiscences from Brazil" (Tempus clasico).
Delvizio was a soloist with symphonic ensembles such as "Orquestra Sinfônica da URFJ", "Orquestra Sinfônica Municipal de Campo Grande", and also with choirs, playing Castelnuovo-Tedesco´s "Romancero Gitano", in many occasions. He also debuted works by Edino Krieger, Marco Pereira, Ricardo Tacuchian, Dimitri Cervo, and Ronaldo Miranda, among other authors.
As a composer, he won the "1st Composition contest of UNIRIO" (2008), and the 4th place in "Contest Oscar Niemeyer - 100 years" (UFRJ, 2008). His works were performed at the XVIII and XXIV "Contemporary Brazilian music Bienal" (2009, 2021), and also in the USA, Portugal, Finland, Japan, and France. His "Folk Suite No. 1" was premiered in 2020 by Orquestra Filarmônica de Goiás commissioned by the prominent British conductor Neil Thomson. In the same year delivered his "Forest Scenes" suite for recorder orchestra commissioned by Stuttgarter Blockflötenorchester, from Germany, soon to be premiered. During social isolation, he composed "The Plague" a small opera that first debuted as a remote video recording and later, in 2021, staged and streamed.
His "Divagações Intervalares" for piano and string orchestra was recently debuted in 2021 at the XXIV Contemporary Brazilian music Bienal. Delvizio tends to address social issues in his works, as in his "Indian Requiem, op. 33" for soloists, choir, and orchestra.
Delvizio is a Doctor in Arts (USP, 2019), Master in Musicology (UFRJ, 2011), and Bachelor in Classical Guitar (UFRJ, 2008) under the tutoring of Dr. Turibio Santos. His dissertation won the "FUNARTE Prize of Music Critic Production 2013" for publishing. The book "Agustín Barrios in Dreamland: the Amazing journey of a Paraguayan Guitarist Across Brazil" is available in Portuguese and English, and was presented at the "GFA International Convention 2015" at Oklahoma City, "New Mexico Classical Guitar Festival", "New Orleans International Guitar Festival", "Mangoré Series" (at Manaus, Brazil), among many others concerts and lectures.

Francisco Mignone
(b São Paulo, 3 Sept 1897; d Rio de Janeiro, 2 Feb 1986). Brazilian composer and conductor. A son of an Italian immigrant musician, he began flute and piano studies with his father, continuing his piano training from 1907 under Silvio Motto. At an early age he played both of his instruments in local dance orchestras. He studied the piano, the flute and composition at the São Paulo Conservatory, where he was a pupil of Cantù and from where he graduated in 1917; although Mário de Andrade was his teacher for history and aesthetics, it was only later that Mignone came under Andrade's influence. By 1920, when he left for Europe, Mignone had composed and conducted several orchestral pieces. He studied under Ferroni at the Milan Conservatory, and there he wrote the opera O contratador de diamantes (1921), first performed in Rio de Janeiro in 1924; Congada, taken from the second-act ballet, achieved great popularity. A second opera, L'innocente, was presented in Rio with great success in 1928; the following year Mignone returned to the São Paulo Conservatory as a harmony teacher. In 1933 he moved to Rio and was appointed official conductor and conducting teacher at the Escola Nacional de Música; he also taught privately for many years. After a European conducting tour (1937–8) he visited the USA for the first time in 1942. In New York the League of Composers had some of his works performed and he conducted the NBC and CBS orchestras in concerts of his music. During the next two decades he held many different appointments in Brazil, among them the music directorships of the Teatro Municipal, Radio Ministério da Educação e Cultura and Radio Globo.