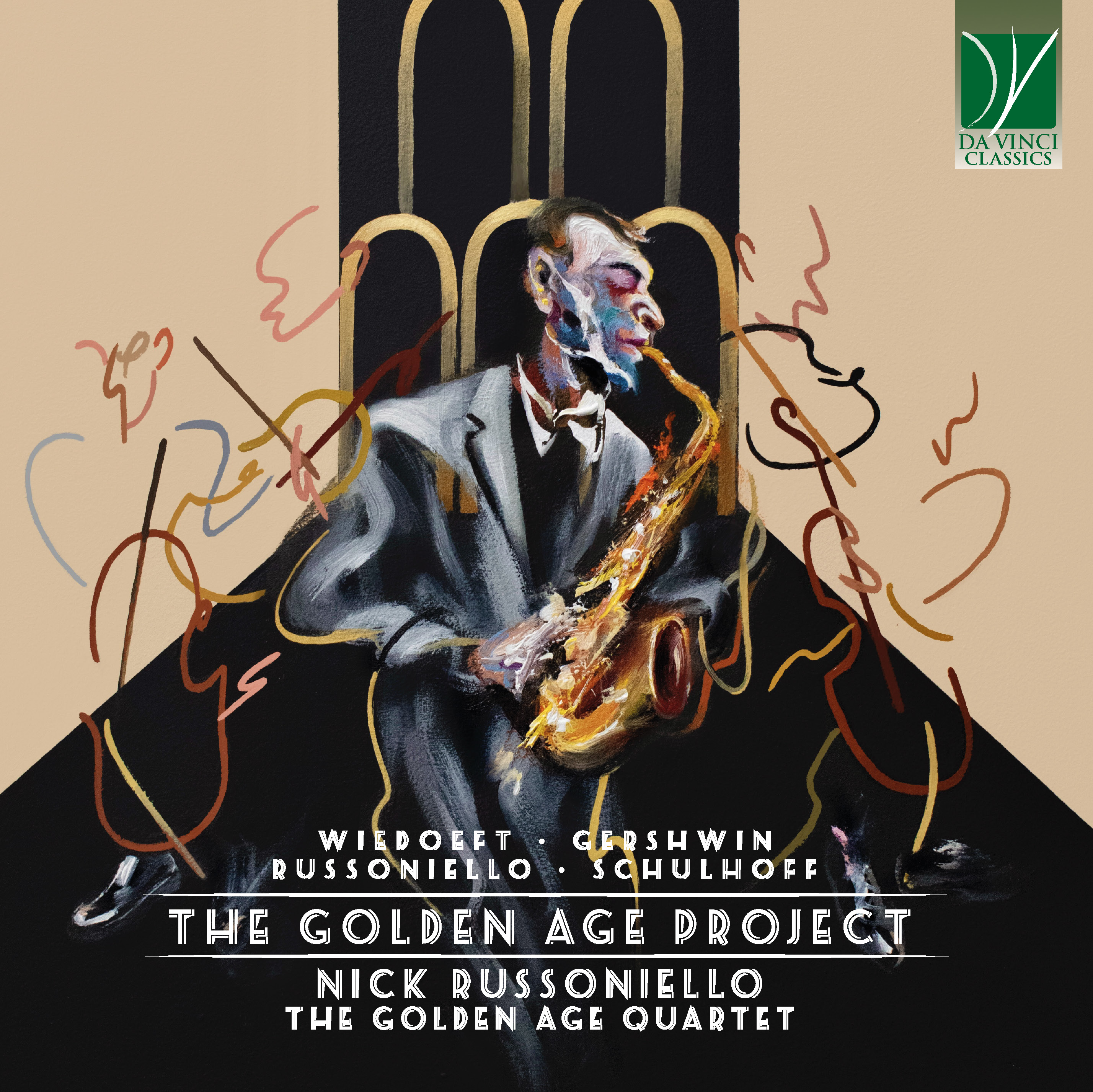 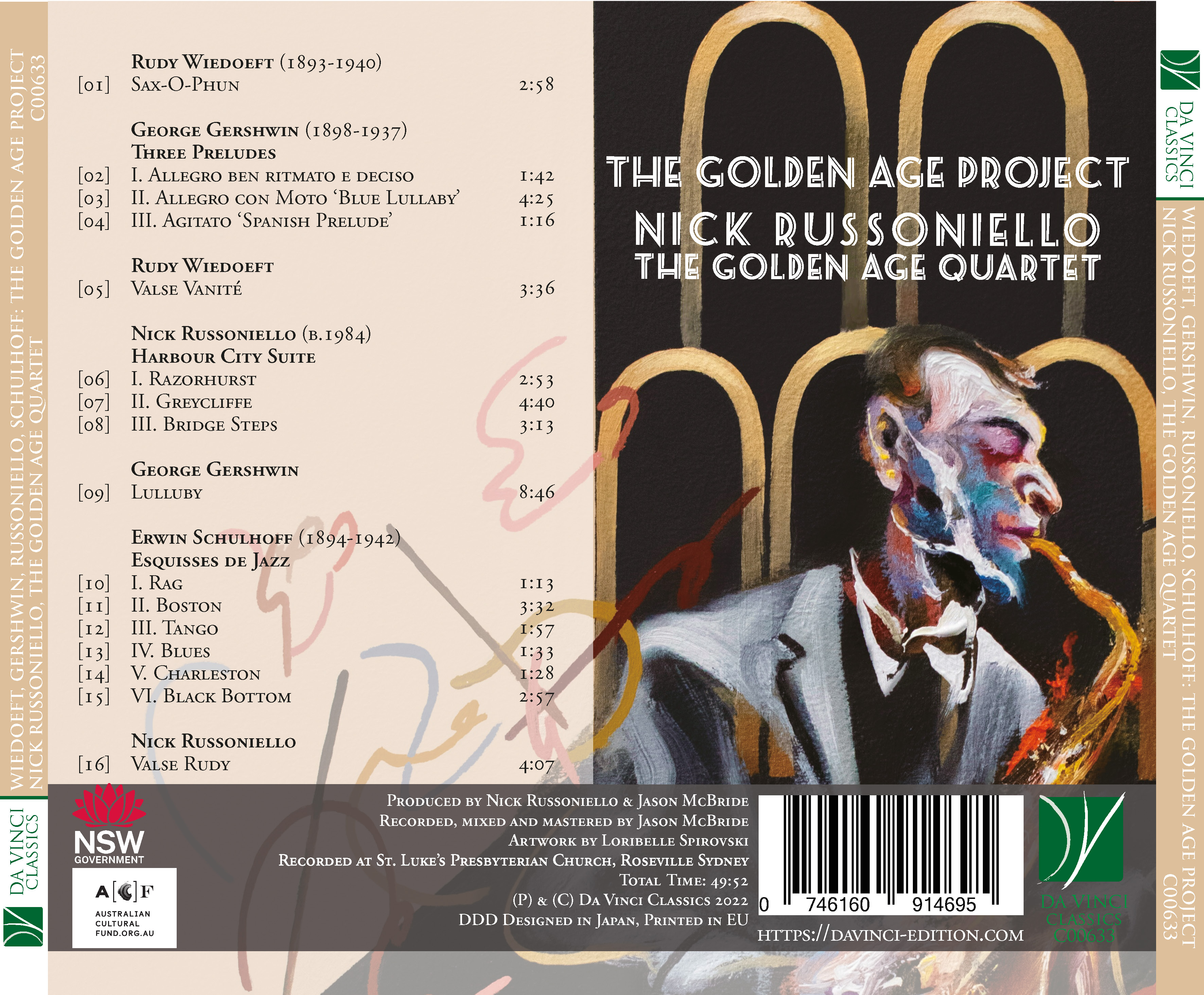 An infectious saxophone craze swept across 1920s USA. The bubbling optimism of the time combined with the effect of virtuosi such as the Brown Brothers and Rudy Wiedoeft sparked a mania; everyone wanted to play the sax. In these years, Conn sold more saxophones than in any decade since. At the peak of the craze, Kansas City made it illegal to play the saxophone within the city limits between ten-thirty at night and six in the morning. The saxophone went from a novelty-gimmick instrument to the national musical instrument of America.

The works on this album spotlight 1920s musical icons: Rudy Wiedoeft, George Gershwin and Erwin Schulhoff. The piano and saxophone pieces are arranged for strings and saxophone by Russoniello to evoke the tones of the dance orchestra, jazz clubs and rich string sections of the era. This reimagined sound world has also been constructed using historical performance elements. Russoniello plays on an original Conn 1926 tenor saxophone in C (also known as a ‘C-melody’) which had its heyday in the 1920s and has since vanished into obscurity. More mellow than modern day saxophones, the C-melody was made famous by Wiedoeft. The C-melody’s popularity could also be attributed to its functionality; as it is non-transposing it could be played along to piano and vocal scores at sing-alongs. The string quartet on this album adopt the gut strings of the 1920s and employ portamento, tempo flexibility and the shimmery vibrato style popularized by violin virtuoso Fritz Kreisler.
In the 1920s, Rudy Wiedoeft—the “Kreisler of the saxophone”—was appearing on every major stage in America. The chart topping Sax-O-Phun (1925) flaunts a laughing-effect, slap-tongue, crisp staccato and dazzlingly fast fingers. This work brought Wiedoeft to national attention alongside similar works such as Saxophobia, Saxema and Saxarella. Like Kreisler, who used the waltz as a vehicle for virtuosity, Rudy exploited this genre with his compositions Valse Erica, Valse Sonia, Valse Llewellyn, Valse Marilyn and the classic, Valse Vanite (1923). Modeled on the traditional minuet and trio form, Valse Vanité features a graceful and highly lyrical opening section, followed by explosive, virtuosic passages and a sentimental trio. Russoniello pays tribute to this form with his original Valse Rudy (2019), a work for solo saxophone which merges the style and extended techniques of Wiedoeft’s classic numbers with layers of more-recent idiomatic inventiveness.

Russoniello’s other original contribution to this album is Harbour City Suite (2022) for saxophone and string trio. The suite retells, in melody, historical events from Sydney in the 1920s. The first movement, Razorhurst, depicts the violent and somewhat romanticized razor gangs that were highly active in the inner city suburb of Darlinghurst. The second movement Greycliffe is composed in memory of the deadly Greycliffe ferry disaster of 1927. The collision between the small Greycliffe public ferry and a large steamer resulted in the death of forty passengers and is still the deadliest accident that has occurred in Sydney Harbour. The final optimistic movement, Bridgesteps, is inspired by the construction of the Sydney Harbour Bridge. This landmark was constructed step by step across the decade of the 1920s; ninety years on the bridge is still a focal point of the city’s identity.

Gershwin’s Three Preludes (1926), originally for solo piano, are here reimagined by Russoniello for saxophone and string quartet. Belonging to an original set of five preludes premiered by Gershwin at the Hotel Roosevelt in New York City in 1926, these were the three to be later published in 1927. Described as ‘brief and glowing vignettes of New York life’ by the critic for Evening World on it’s premiere, this set opens with a bustling, lively movement, characterized by syncopated rhythms and blues motifs. Lulling melodies are exchanged between the saxophone and violin in the second prelude and the strings provide the syncopated rhythmic drive in the final Allegro ben ritmato e deciso.

Gershwin’s lesser-known Lullaby (1919) is presented by the string quartet alone. It is the earliest example of one of his concert pieces, written when his output was predominantly for the broadway stage. In these years, the Lullaby was played only by Gershwin’s friends at private gatherings. The first public performance of the work was in 1967 by the Juilliard String Quartet, years after Gershwin’s death. The work opens with suspended open string chords, followed by a sleepy, undulating melody, establishing the lullaby-feel. The bluesy character is amplified by the portamento and hollywood-esque vibrato. The work ends with the melody played in harmonics; the cello yawns the last few bars and the piece ends with a pizzicato wink.

Czech pianist and composer Erwin Schulhoff (1894-1942), like Gershwin, was affected by the rhythms of jazz. In a letter to Alban Berg in 1921 he wrote: ‘I have a tremendous passion for the fashionable dances and there are times when I go dancing night after night with dance hostesses purely out of rhythmic enthusiasm and subconscious sensuality; this gives my creative work a phenomenal impulse…’. Schulhoff was active in the Czech avant-garde scene in the interwar years with much of his work demonstrating influences of dadaism, jazz, impressionism, expressionism and neoclassicism. Schulhoff seamlessly works these disparate influences into popular dances in his Esquisses de Jazz (1927). Originally for solo piano, this work has been adapted by Russoniello for saxophone and string trio. The Rag screams elements of absurdism. The saxophone performs the angular melody and the strings make unruly interruptions, discordant protests and exaggerated sighs. The sublimely silky Boston, with its vivid expressionist harmonies, is sentimental at every step. The Tango and Blues are steeped with understated sensuality and the Charleston has a restless and frenetic energy. The work concludes with the somewhat cheeky Black Bottom, a dance that spread from humble beginnings in the Black Bottom area of Detroit to become one of the most popular dances of the era.

Ella Brinch studied at the Sydney Conservatorium of Music, later moving to the UK to undertake postgraduate studies at the Royal Northern College of Music. She was a chamber music Fellow at the Guildhall School and the Royal Academy of Music in London. Ella has performed with orchestras in Australia and the UK including the Sydney Symphony Orchestra, Opera Australia Orchestra, Hallé Philharmonia and the Academy of St. Martin in the Fields. She was also a member of the City of Birmingham Symphony Orchestra for three years. As violist of the Barbirolli Quartet for eight years, Ella performed around the world at some of the great halls and festivals including the Wigmore Hall, Concertgebouw, Vienna Konzerthaus and Lincoln Center and appeared in festivals including Cheltenham, Aldeburgh, Aix-en-Provence and Verbier. Since returning to Sydney, Ella has been working as a freelance violist performing with orchestras and in recording sessions as well as being involved in chamber music projects with various ensembles including the Omega Ensemble and Phoenix Collective.

Julia Russoniello is a Sydney based violinist specialising in the historical performance of nineteenth and early twentieth-century repertoires. A current PhD student at the University of Sydney, Julia holds a Postgraduate Research Scholarship in Music History and Creative Practice and is a recent recipient of the National Archives of Australia Postgraduate Fellowship. Julia additionally holds a first-class Honours and Master of Music from the Sydney Conservatorium of Music in historical performance. Julia has performed with many of Australia’s leading historical performance ensembles including the Australian Romantic & Classical Orchestra, Australian Haydn Ensemble, Bach Akademie Australia, Australian Brandenburg Orchestra, Muffat Collective and Orchestra of the Antipodes.

Paul Stender returned to Australia in 2009 from studying at the University of Music and Performing Arts with Vienna Philharmonic principal Wolfgang Herzer. Paul has since worked regularly with the Sydney Symphony Orchestra and Australian Chamber Orchestra and has been the guest principal cello with the Australian Opera and Ballet Orchestra, Sydney Philharmonia Orchestra and the ACO Collective. Paul is a keen chamber musician and in addition to appearances with the Australia Ensemble, he is currently cellist with the Omega Ensemble with which he maintains a busy performing, touring and recording schedule.

Rachael Beesley is an internationally renowned Australian/British violinist, director and educator specialising in the field of historically informed performance and is co-artistic director, director and concertmaster of the Australian Romantic & Classical Orchestra.  Rachael performs internationally as guest concertmaster with distinguished HIP ensembles and orchestras, Anima Eterna Brugge, La Petite Bande and the New Dutch Academy and in Australia with the Australian Brandenburg Orchestra, Pinchgut Opera, Opera Australia and Victorian Opera, and as guest director of Les Muffatti Brussels and NZBarok Auckland. Rachael features on over 50 album recordings and broadcasts for radio and television and is in demand as a chamber musician and soloist, regularly collaborating with contemporary composers. Recent engagements include primo violino e capo d’orchestra with Teatro Nuovo New York and guest director of the Canberra Symphony, Melbourne Chamber and Adelaide Baroque Orchestras.

Stefan Duwe
Born in Oldenburg, Germany, Stefan Duwe studied viola with Marcel Charpentier, Konrad Grahe and Emile Cantor at the Folkwang University of the Arts in Essen and attended masterclasses with Thomas Brandis and Serge Collot. From 1992 he worked with a number of orchestras including the Kölner Kammerorchester, Theater Nordhausen, Folkwang Kammerorchestra, Philharmonia Hungarica, Philharmonie Essen, Düsseldorfer Sinfoniker and Die Deutsche Kammerphilharmonie Bremen. After immigrating to Australia in 2001, Stefan has worked with the Australian Brandenburg Orchestra, Pinchgut Opera, Orchestra of the Antipodes, Sinfonia Australis, Sydney Scoring Orchestra, Opera Australia Orchestra and Sydney Lyric Orchestra. Since the formation of Acacia Quartet, Stefan has turned his focus to chamber music and teaching.

Teije Hylkema holds the position of Principal Cello and Section Leader in the Opera Australia Orchestra. Teije first joined the Orchestra in 2014 after moving from Holland. He started his musical studies at the age of nine, and under the tutelage of Dmitri Ferschtman went on to complete a Masters of Music at the Conservatorium of Amsterdam. Over the course of his career, Teije has won a number of awards including the Prinses Christina Concours, Concertgebouw Vriendenkrans competition and the Thomastik-Infeld Prize, and has performed for the Dutch Royal family on Queen’s Day in Holland.

George Gershwin: (b Brooklyn, NY, 26 Sept 1898; d Hollywood, CA, 11 July 1937). American composer, pianist, and conductor. He began his career as a song plugger in New York’s Tin Pan Alley; by the time he was 20 he had established himself as a composer of Broadway shows, and by the age of 30 he was America’s most famous and widely accepted composer of concert music.