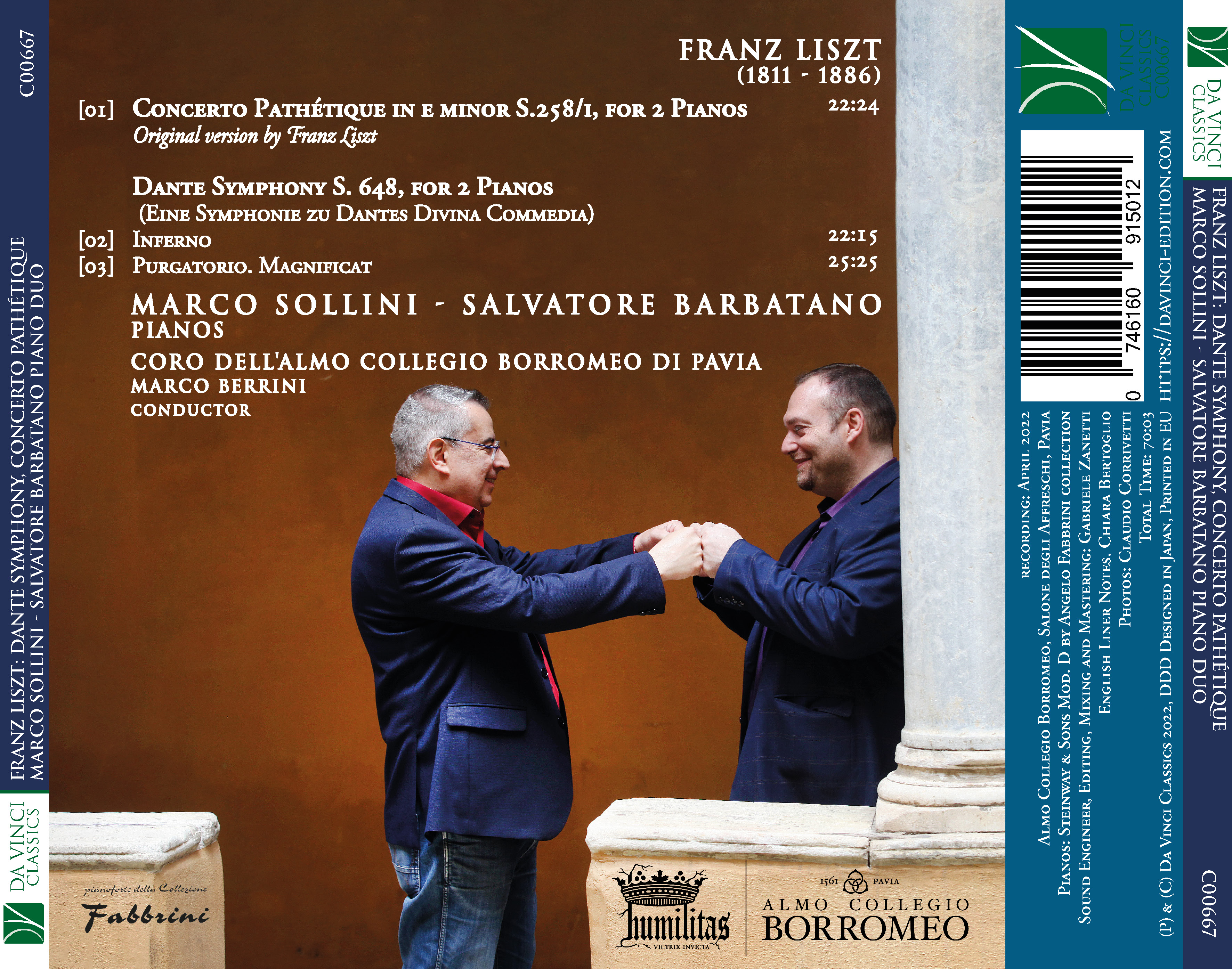 Marco Sollini: Italian pianist with a solid musical education was definited by Claudio Scimone “a great poet of the keyboard”. He has performed in some of the most important concert halls all over the world, as Salle Cortot of Paris, Musikverein Golden Hall of Wien, Concertgebouw of Amsterdam, Smetana Hall of Prague, Main Hall of the Cairo Opera House, Mailowsky Palace and Caterina Palace of Saint Petersburg, Solti Hall of the Liszt Accademy in Budapest, Manoel Theatre of Malta, Grossesaal of Mozarteum in Salzburg and others. He performed as soloist in recital and in prestigious Orchestras, as Dohnanyi Symphonic Orchestra and MAV in Budapest, Hungarian State Symphony Orchestra, Stuttgard Symphony Orchestra, Slovak Radio Symphony Orchestra, Serbian Radio Television Symphony Orchestra, I Solisti Veneti, Sanremo Symphony Orchestra, Orchestra Metropolitana Città di Bari, I Solisti Aquilani, Malta Philharmonic Orchestra, Ciudad de Elche Symphony Orchestra, Bohuslav Martinů Philharmonic Orchestra, Saint Petersburg State Symphony Orchestra, Cairo Symphony Orchestra, Kroatisches Kammerorchester, Euro Sinfonietta Wien, Kharkiv Philharmonic Orchestra and many others. He has a large discography with around 40 CDs devoted to the music of Bach, Kozeluch, Clementi, Mozart, Schubert, Chopin, Liszt, Thalberg, Poulenc, Rachmaninov, Rimskij-Korsakov, Menotti, Sollini. His discography also inclused the first world of Piano Music of Leoncavallo, Puccini, Giordano, Mascagni, Bellini, Verdi, Persiani, Offenbach. His four CDs devoted to Rossini Piano Music have been definited the “reference edition” by the Rossini German Society (Deutsche Rossini Gesellschaft). He has worked as contributing editor with the Publishing house Boccaccini & Spada for the complete edition of Puccini’s, Mascagni’s, Giordano’s, Leoncavallo’s, Bellini’s piano music, and other previously unpublished chamber compositions of Rossini and Mascagni.
He plays in duo with Salvatore Barbatano and he has cooperated with several chamber ensembles and with important Artists such as Bruno Canino, Antonio Ballista, Quartetto della Scala, Simonide Braconi, Cremona Quartet, Francesco Manara, Alain Meunier, Claudio Scimone, Elena Zaniboni, Fabrizio Meloni, Maxence Larrieu, Fabio Armiliato, Ugo Pagliai, Paola Pitagora, Paola Gassman and many others. Since 2014 he has been teaching at the AFAM – Superiur Institute of Musical Studies “O. Vecchi – A. Tonelli” of Modena-Carpi.
He hold several master classes at the Arts Academy of Rome, Lima State Conservatory, Tirana Arts Academy, Winston-Salem and Davidson Colleges in USA, Izmir Conservatory, Bogotà Conservatory and Superior Royal Conservatory Reina Sofia of Madrid. He was in the jury of several piano competition, such as the “Roma” International Piano Competition, Ars Kosova Music Competition of Pristina (Kosovo), Aram Khachaturian International Competition of Yerevan, Coppa Pianisti of Osimo, Premio Internazionale Pianistico Alexander Scriabin of Grosseto, Cleveland Youth Piano Competition. He received in Campidoglio of Rome the prize “Marchigiani dell’anno 2001” for his international artistic activity.
He is president and artistic director of the “Marche Musica” Association, founder and artistic director of the international music festival “Armonie della sera”, wich has been organizing public concerts in the most evocative places in the Marche region and around all Italy.