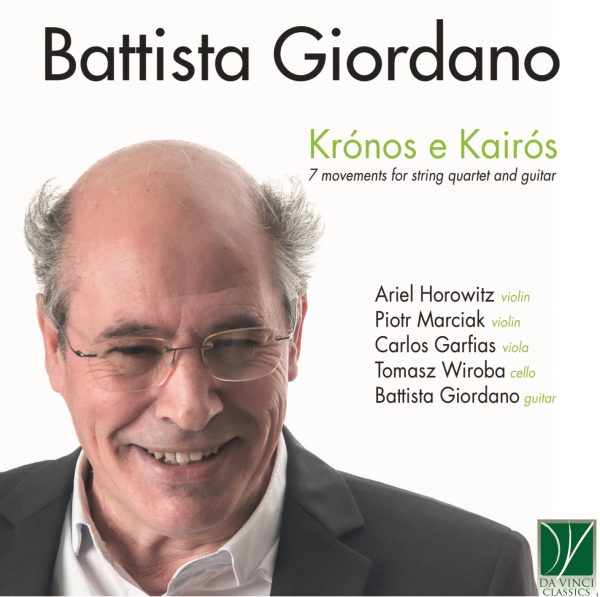 Battista Giordano got his diploma in classical guitar at the Conservatory A.Buzzolla, Adria, under the guidance of Maestro Roberto Masala. He studied harmony with Maestro Antonio Doro and graduated in Didactics of Music. In 1987 he got the Sant'Anna Arresi International Festival Jazz award with his own record "Presage". He has cohoperated with Billy Cobham, the soprano Antonietta Chironi, the composer Antonio Doro, whose music has been played several times by Battista Giordano, especially "Di bandiere", "Di occhi di cuori", "A voi noi potremmo", performed at the Teatro alla Scala in Milan in December, 1997 on the occasion of the Festival of Contemporary European Composers. He wrote for many plays, such as "Microcosmi" for the soprano Paola Puggioni, and" Due sogni di versi", "Taglie forti" for the poet Alessandra Berardi. In 2004, on commission of Intermezzo he wrote "Imprentas", and in 2005 he wrote the score of the melologue"Adelasia" for tenor, contralto, soprano, violin and reciting voices. In 2007 he wrote the music for the international production of" Isolanos", featuring Omar Sosa. In 2009 he wrote the music for"Terra", for the Sphairos Ballet which was choreographed by Mike Zeni, first ballet dancer at the Teatro alla Scala, Gianluca Schiavoni and Massimiliano Volpini, and performed by the dancers of Teatro alla Scala. In October, 2009 he wrote the music for the recital Caminantes, first performed at the ItalianCultural Institute of New York for a season in collaboration with The Jazz at Lincoln Center. In 2010 he wrote on N'ur commission the score of" Regio Coelis", first performed in Rome, at the S.Salvatore in Lauro cloister. In the same year he wrote the music for the ballet" Django" choreographed by Mike Zeni and Gianluca Schiavoni and performed by the dancers of the teatro alla Scala.
In 2011 he wrote to the pianist Claudio Constantini and the violinist Carlos Garfias the music for a concert that was followed by the release of the "Sonatina op.1 e sei fantasie" album in 2013. In 2012, on the occasion of the Ettore Scola Prize for Career, he wrote for the string quartet "Karel Quartet" the arrangements of the music taken from the most significant films of the director. In 2017, for the thirtieth anniversary of the CalagononeJazz festival, he wrote Kronos and Kairos for string quartet and guitar, performed for the first time in the same festival by Ariel Horowitz vl, Piotr Marciak vl, Carlos Garfias vio, Tomasz Wiroba vc and by the composer himself on guitar. n 2018 he wrote for the pianist Larissa Belotserkovskaia 5 pieces presented by the russian pianist on July 4, 2018 in Lima in the Pirandello theater by the Italian Institute of Culture of the same city. Also in 2018, he wrote the "Missa ad Humiles" for choir and orchestra. In August 2018 he wrote a concert for violin and orchestra whose performance is scheduled for 2109 in Bulgaria.