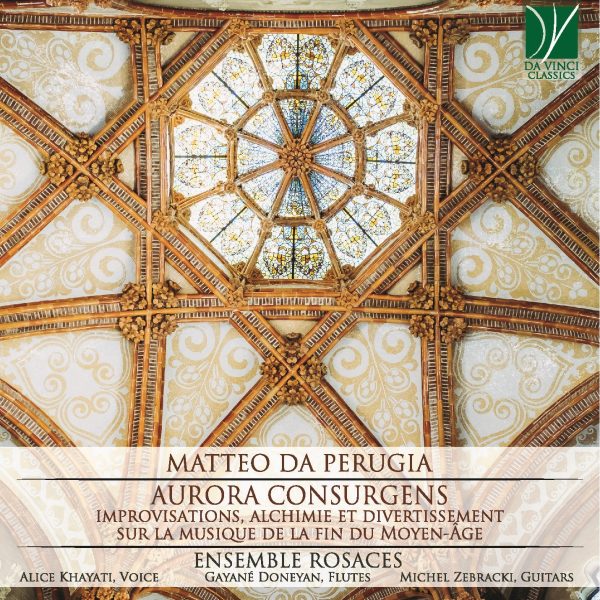 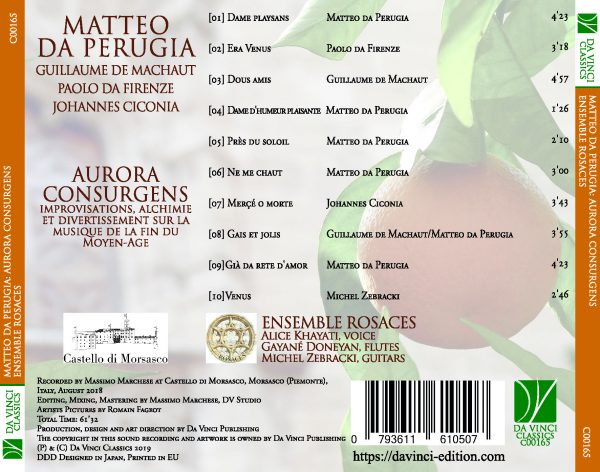 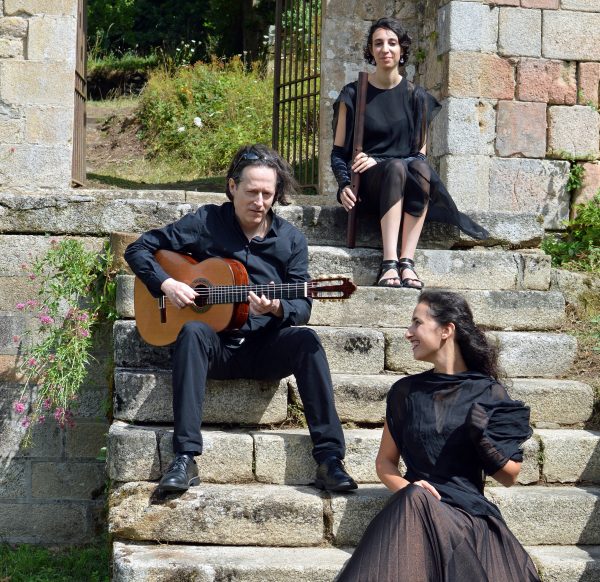 The Aurora Consurgens is an alchemical treatise of the 15th century usually attributed to Thomas Aquinas. Written as a commentary on the Latin translation of the al-Mā’ al-Waraqî wa’l-Ard an-Najmīya (The Silvery Water and the Starry Earth) by Senior Zadith (Ibn Umayl), alchemist of the tenth century, it seems to fit well as a title for the project proposed to Da Vinci Classics by the Ensemble Rosaces. Their idea of music could be not farther from a philological reconstruction; at the same time, it could be considered even close to an original ancient idea to perform the ancient improvisation performed nowadays. Hard to define univocally, their performance boundaries spread from an unconventional approach to the music by Matteo da Perugia, with a real alchemical fusion with ancient-like contemporary improvisations that constantly “trope” the original text. Such a unique idea of performance should not frighten the use of a guitar, an instrument surely not as ancient as the music performed, that, in this “retro-avantgardistic” context, sounds unimaginably well.

Matteo da Perugia was, as his name stated, presumably from Perugia. First magister capellae and the only cantor at the as yet unfinished Milan Cathedral from 1402 to 1407. His duties as described in the cathedral records were to ‘biscantare’ during solemn feasts as well as to teach music, but the date of his birth and death are unknown. The last record of him in Milan Cathedral dates to January 1418, which, does not contain a notice of Matteo’s death, but merely records a complaint by Matteo’s successor, Ambrosino da Pessano, that his salary was not as high as Matteo’s had been. His surviving compositions include mass movements, two isorhythmic motets and both Italian and French secular songs, some of them presented in this recording. The German-American musicologist Willi Apel regarded Matteo as the principal composer of his generation, in whose compositions one could trace the stylistic transition from mannerism to the ‘modern style’ of the early 15th century. Even if other musicologists, as Heinrich Besseler, challenged this viewpoint, Matteo’s position in history is still an open question.
This cd contains a miscellanea from Ballades (as Pres du soloil), Virelais (as Ne me chaut) and Rondeaux (as Dame playsans) and connects its music with works of his most distinguished contemporaries like Johannes Ciconia or Paolo da Firenze and Guillaume de Machaut, the latter one often an inspiration for Matteo’s compositions as in Se je me plaing de Fortune that quotes the opening texts and the first eight bars of cantus and tenor of Machaut’s Se je me plaing and De Fortune me doit plaindre.

As the old alchemists studied how to change basic substances (such as metals) into other substances (such as gold), the main aim of the Rosaces in this Aurora consurgens is to transmigrate the soul of this music into a modern heart and imagine how this two worlds that are so far away can communicate with modern times. At the same time, they pay homage to one of the greatest composers of the medieval period, setting a long-shot for possible use of medieval music as groundwork for something entirely new.

Ensemble Rosaces: Far from any historical reconstruction, the ensemble Rosaces with Alice Khayati (voice), Gayané Doneyan (flutes) and Michel Zebracki (guitars & arrangements), tries to appropriate the swan song of an era, creating connections with the modern music through its rhythmic wealth, great polyphonic freedom, its latitude for improvisation.
And even if it is a real squaring the circle, the musicians trie, through this imaginary and flamboyant journey to cross ages, to experiment with time, in other words, how to make this timeless modernity resonate nowadays.
Since its creation in 2015, the group performed in Burgundy, Nantes, Auvergne, Brittany and Paris area. In November 2016, when their first Album as a Duo was released, Rosaces played at the Péniche Anako (Paris), and took part of the competition for young talents as part of the "Chambre avec vue" Festival (Rabastens).
Following the "Musique en Breysse" residency, the group is extended with the arrival of Alice Khayati, becoming a shape-shifting ensemble, and in September 2018 recorded in trio in Morsasco (Italy) for Omk-Da Vinci the "Subtiles Renaissances" programm after Matteo da Perugia (active between 1380 and 1418), a musical creation with "great contamination between early music and jazz".

(b Liège, c1370; d Padua, between 10 June and 12 July 1412). Franco-Flemish composer, active principally in Italy. More music by him survives, with more stylistic variety, than by any other composer active around 1400.

Matteo da Perugia: (fl 1400–16). Italian composer. He was presumably from Perugia. He was the first magister capellae and the only cantor at the as yet unfinished Milan Cathedral from 1402 to 1407

Most earlier views on his life were superseded by the discovery of an antiphoner (F-DOU 1171), dated 1417, with an inscription crediting its organization to Dominus Paulus, abbot of the Benedictine monastery of S Martino al Pino, near Arezzo, and rector of the church of S Maria Annunziata Virgine (generally known by the name of the hospice it occupied and served, Orbatello) in Florence. This antiphoner is beautifully illuminated in the style of S Maria degli Angeli in Florence, namely the style found both in the Squarcialupi Codex and the manuscript I-Fl Ashb.999, which contains Paolo's Gaudeamus omnes. Further evidence that this is the correct Paolo comes from his will, bequeathing three books of music and ‘unum Boetium musicale’.

The will, made in Florence and dated 21 September 1436, names his father, Marco, and three brothers: Domenico, Antonio and Nicolo. Since the act of resignation of Paolo's abbacy, dated 16 June 1433, says he was around 78 years old, a birthdate of around 1355 seems certain. So he is likely to have entered the Benedictine order in about 1380. On 8 March 1401 he was appointed abbot of S Martino al Pino. According to the 18th-century Arezzo chronicler Hieronymus Aliotti, Paolo supported the election of Pope Alexander V at the Council of Pisa in 1409, a detail that would fit well with the text of his madrigal Girand' un bel falcon, almost certainly reflecting Florentine antipathy to Pope Gregory XII in that year.

It is not clear how long before 1417 he became rector at Orbatello in Florence, but several documents report his residence there from February 1420 until January 1427. In 1419 and 1423 he acted as papal legate for S Maria degli Angeli. Moreover, the text of Godi, Firenze suggests that he was resident in Florence in 1406.

The above documentation (all first presented in Günther, 1987) eliminates earlier identifications of the composer as a singer at S Reparata, Florence, in 1408 and as the Camaldolite Paolo at the Badia del Sasso, near Arezzo, in 1419. (His portrait in the Squarcialupi Codex, see illustration, has him in the black of a Benedictine, not the white of a Camaldolite; since this was done at the Camaldolite monastery S Maria degli Angeli, it can hardly be wrong.) Moreover, no evidence has been found to support earlier theories that he could have been related to the affluent Capponi or Leoni families of Florence; details of his will and reports on the poverty of his brother, Domenico di Marco, suggest that Paolo was from a humble family.

Far harder to construe is the Paolo, abbot of S Andrea de Pozzo in the diocese of Arezzo (and near to S Martino al Pino), who witnessed a document of Cardinal Angelo Acciaiuoli in Rome on 16 July 1404. The composer was abbot of S Martino al Pino from 1401 to 1433 and seems unlikely to have held another abbacy at the same time; but a document of May 1419 shows him appointing a new rector to S Andrea de Pozzo – in fact the man who eventually became his successor as abbot of S Martino al Pino. Moreover, in 1404 Cardinal Acciaiuoli received a decorated missal from the monastery of S Maria degli Angeli.

That Paolo's name has the suffix ‘tenorista’ the first time it appears in F-Pn it.568 suggests that he was at some stage active as a professional singer, perhaps before he became abbot. The prefix ‘Don’ (or ‘Dominus’), otherwise used only for the Benedictine Donato, endorses the view that he was a Benedictine.

Most of his music survives in F-Pn it.568, sometimes with the ascription erased (though in most cases endorsed by other sources) and sometimes with indications in the original index that almost certainly imply his authorship (fully argued in Nádas, 1989). But the other main Trecento sources almost entirely overlook him, which is odd for the second most prolific composer in that repertory. There is nothing in I-Fn Panciatichiano 26; just one piece in GB-Lbl Add.29987; two at the very end of I-La 184; and one in F-Pn n.a.fr.6771 (Codex Reina) – a unicum (Perch' i' non seppi) often doubted on the grounds of its style and the manuscript's non-Florentine origin, though the ascription is one of only four in the entire original layer of the manuscript and should therefore not be taken lightly. Most puzzling of all, two gatherings (16 folios) of I-Fl Pal.87 (the Squarcialupi codex) are laid out for his music, each opening headed ‘Magister Dominus Paulus Abbas de Florentia’, and preceded by a marvellous portrait (see illustration), but no music was entered. An added puzzle in this last case is the coat of arms at the foot of the portrait page as well as on the first page of the manuscript, once identified as that of the Leoni family, but now considered unidentifiable. While the earlier view that Paolo was largely responsible for the Squarcialupi codex was based on much evidence now shown to be untenable, the placing of those arms, and Paolo's demonstrable contacts with S Maria degli Angeli, where it was illuminated, strongly point to some kind of contact yet to be defined.

More recently discovered sources clarify the picture. The ‘Lowinsky’ fragment (now US-Cn Case ML 096.P36, facs. and edn in Pirrotta, 1961) is entirely of his work, though without any ascriptions. The fully ascribed ‘Ciliberti’ fragment (owned by Galliano Ciliberti; facs. and partial edn in Brumana, 1987) is also devoted to Paolo, this time with ascriptions on each page and adding several new works; it was from a larger manuscript evidently organized by composer. The almost illegible palimpsest manuscript I-Fsl 2211, devotes its 14th gathering to his work, endorsing tentative ascriptions elsewhere.

Marrocco's edition of Paolo (PMFC, ix, 1977) contains only 33 of the 61 works listed below, cautiously avoiding those in F-Pn it.568 with erased ascriptions (which he put among the anonymous works in PMFC, viii and xi); but although those erasures have not been explained there are now enough supporting ascriptions elsewhere (as also for the erased ascriptions to Landini in the same manuscript) for confidence that these works are indeed by Paolo. What can perhaps be said is that most of them lack the quality and individuality of Paolo's best work, so it is just possible that he later preferred to suppress them; if so, perhaps it was a similar attitude that delayed his decision on which pieces to have copied into the Squarcialupi codex.

The madrigals ascribed with the ‘PA’ monogram in F-Pn it.568 (that is, those in the added gathering 6) seem to show the influence of the Ciconia generation (perhaps after 1400) and to be in a later style than the others, which draw more heavily on the styles of Landini and even Jacopo da Bologna. Similarly, the ballatas ascribed ‘PA’ (in the added gathering 8) show the most ambitious style, with unexpected textures (La vaga luce, Lena virtù), notational ambition (Amor da po', Amor tu solo), metrical irregularity and unpredictable tonal schemes (Chi l'agg' i' fatto), whereas the remainder show strong influence from the later works of Landini.

On such a model, it looks very unlikely that any of his known music could be later than about 1410, despite his having lived a further quarter-century.