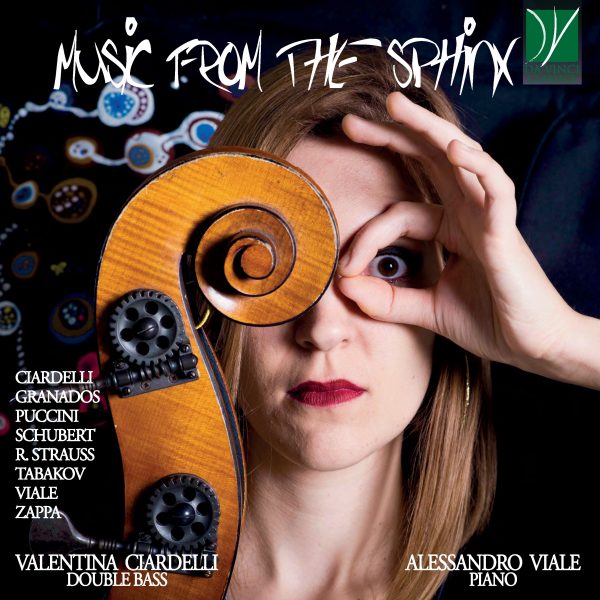 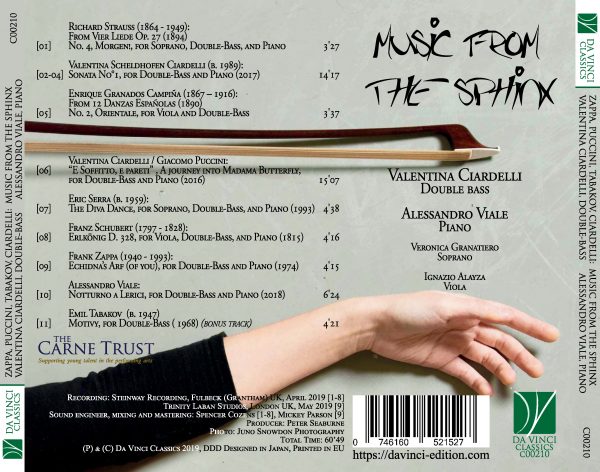 Music from the Sphinx is a humorous reaction to this famous quote from Arturo Toscanini: “I will die before getting to understand women and the intonation of the double basses.” As a woman and a double bassist, that must make me doubly difficult to understand! I must indeed be a sphinx. My musical journey has been to arrange, adapt and bring to life a range of repertoire that responds to Toscanini by turning the unknowable into the approachable. So what does a sphinx sound like? The Double Bass’s identity as proud and independent instrument has always been foggy and this album’s purpose is to give equal space and dignity to the instrument without the necessity to imitate or compete with other virtouso instruments (like a baritone pretending to sing Mozart’s “Queen of the Night”…). The chosen repertoire is an attempt to approach and clarify the potential of this instrument that even nowadays is still a big enigma, not only for Toscanini, but for the majority of listeners. A strong thematic link exists between all the composers. In their music, irony, humour and melancholy are constantly present: they are rebellious, dreamers, fighters and visionary humans. Their pieces are theatrical in nature, have a strong message and a story to tell (stories that are so far away from the apparent reality but that are so close in terms of feelings) and – perhaps most important of all – really wanted to communicate with a wide audience.

“Without deviation from the norm, progress is not possible” F. Zappa

Alessandro Viale was born in Rome, he is an eclectic musician who believes in the artist as a well-rounded person, active in society. This is why he studied piano, harpsichord, composition, conducting and chamber music, not to mention a degree in physics. He played extensively in many important venues in the UK, Norway, Germany, India, Malta, Spain, and Italy. He has appeared on radio and TV, his music being performed and broadcast throughout Europe by renowned musicians. His collaboration with composers has resulted in the world premiere of a significant number of new pieces, many written for him. He has recorded several CDs of piano solo and chamber music, which have been reviewed in prestigious magazines such as Gramophone, Musical Opinion, BBC Music Magazine, and The Financial Times.

Ignazio Alayza was born in 1994 in Italy, and currently lives in Austria. He graduated with honours in viola performance at the Giacomo Puccini Music Conservatory of La Spezia under the direction of Fabrizio Merlini in 2014 and in 2017. Alongside artistic refinement, he has been teaching viola and violin in the framework of a social project based on the Abreu method in his hometown, La Spezia.

Valentina was born in Pietrasanta (Lucca - Italy) to a German mother and Italian father. Initially a pianist, she started to play double bass in late 2009, graduating with Honours from the “Istituto Musicale L. Boccherini” in Lucca in October 2014. She then gained her Master of Performance (Honours) at the Royal College of Music in July 2016. Valentina also focused her attention on composition, graduating in March 2014 with Honours in conservatoire Giacomo Puccini in La Spezia. Valentina has won several awards and prizes including first prize in the RCM Double Bass competition 2016, the Vernon Elliot Double bass Competition 2018, the Vivian Joseph Classical Concerto Competition 2018 and the De Simone and Partners in the Chamber Music Festival in Rome. She won a place with a scholarship in the Accademia Chigiana in summer 2018 with Maestro Giuseppe Ettorre. Additionally, Valentina was a finalist in important national and international competitions such as the Migliori Diplomati D’Italia (best young Italian music graduate) 2015 and Double Bass international competition Galicia Garcia Graves. She was selected with other 16 young double bass players around the world to perform in the live final rounds at the worldwide double bass solo competition granted by the Bradetich Foundation in Denton, Texas, at the end of august 2017. Valentina also won several orchestral auditions such as the Gustav Mahler Academy 2016, BBC SO training scheme, Lucerne Festival (reserve list 2019), Southbank Sinfonia 2018 and the Gran Teatro Giacomo Puccini Torre del Lago Orchestra (Lucca). Between 2013 and 2016 Valentina has played, mainly as principal or co-principal, with several symphonic and chamber orchestras. She also has wide experience in solo performance. She recently won the Artist in Residence at BANFF, Alberta (Canada), who will host her from 15th till 28th September 2019. She gave a performance with “I Solisti Veneti” with Maestro Claudio Scimone (double bass concerto in A major by Domenico Dragonetti and the Fantasia sui temi della Sonnambula by Giovanni Bottesini) and she won the prestigious scholarship granted by this Academy (Proliber). She has performed as a soloist in the prestigious London concert halls Wigmore Hall and St. Martin-in-the-Fields. She was invited to the pre-opening of the Zappanale 2018 in St.Katharinen Kirche (Hamburg) with her Trio featuring the Worldwide saxophone virtuoso Napoleon Murphy Brock. Valentina is a young artist of Talent Unlimited (UK) and she lives and works in London. She been awarded a Junior Fellowship at the Trinity Laban Conservatoire, London for the academic year 2018/19. She also won a scholarship from associazione Animando in Lucca for a research project investigating the music of Giacomo Puccini’s ancestors and her work had been published by Da Vinci Editions. Valentina is focused to expand the double bass solo repertoire composing new virtuoso pieces, transcribing (mostly Frank Zappa’s Repertoire), playing new composition written for her from many contemporary composers such as Bernard Salles, John Alexander, Alexandra Harwood e Kurt Morgan. She also has a wide Jazz experience playing in important Jazz Festival such as Dusseldorf Jazz Marathon, Villa Celimontana Jazz Festival, Tuscia Jazz, Umbria Jazz Clinics and she got to final in competition such as Tuscia Jazz as Best double bass and electric bass player and Nicola Tiberio Awards in 2012. She plays a Scipioni doublebass 2014.

Veronica Granatiero was born in 1988 into a family of musicians. Thanks to her versatility in style during her early years of formation, together with her studies in classical music, she also perfected her skills in the areas of jazz and pop. Having gradutated in 2014 a diploma with honours (cum laude) at the music conservatory U. Giordano in Foggia, Italy. She continued her studies subseqently under the direction of Franco Fussi and Silvia Magnani, experts in Foniatria, obtaining an elevated masters degree in Vocologia Artistica from the University of Bologna, Italy. At the end of these formative experiences, and thanks to the guidance of soprano Francesca Patanè she decided to exclusively devote her career to lyric opera and in chamber music.

Emil Tabakov (b Ruse, 21 Aug 1947). Bulgarian composer and conductor. He graduated in 1978 from the Bulgarian State Academy of Music having studied three subjects: double bass (under Todor Toshev), conducting (under Vladi Simeonov) and composition (under Marin Goleminov). In 1977 though, he had won the Nikolay Malko competition in Copenhagen and he had been conducting the Ruse SO since the age of 17. He conducted the Ruse Philharmonic (1975–9) before directing the Soloists of Sofia ensemble with whom he appeared internationally (1980–89). He was appointed conductor of the Sofia Philharmonic in 1985 and was made its general music director three years later. With this orchestra and as guest conductor with others he has performed all over the world; he has enjoyed particular associations with orchestras in Brazil, California, Germany, Japan and South Korea. Under his baton the Sofia Philharmonic recorded a large amount of the Romantic repertory. From his earliest days as a composer, he has shown an affinity for large-scale works and during the 1980s and 90s this disposition gave rise to monumental compositions such as the Requiem and his four symphonies. But despite this complex and philosophical approach he has always paid attention to orchestral colour and to the delicate use of timbral nuance, especially in his concertante works. During the 1990s his harmonic palette was broadened by an awakened interest in Bulgarian folklore; the resultant language is notable for its laconic bareness and rich pictorial allusion.

Enrique Granados: (b Lérida [Lleida], 27 July 1867; d at sea, English Channel, 24 March 1916). Catalan composer and pianist. Though he enjoyed considerable fame in his native Barcelona, within Spain as a whole his music was less well known than his enduring reputation as the composer of ‘La maja y el ruiseñor’ from Goyescas might suggest. Apart from Goyescas (in its original version for piano), only his Danzas españolas and his first opera María del Carmen brought him significant national acclaim, and relatively few of his 140-odd works were published or performed regularly in his lifetime. A comprehensive view of his work has been hampered by the prevailing but misconceived tendency to divide his music into three compositional periods – known, misleadingly, as the ‘Nationalistic’, the ‘Romantic’ and the ‘Goyesque’ – with a disproportionate emphasis on his Goyescas. Sadly, the greater part of his diverse and extensive output remains obscure and unpublished and, as yet, no detailed study has been made of his life.

Richard Strauss (b Munich, 11 June 1864; d Garmisch-Partenkirchen, 8 Sept 1949). German composer and conductor. He emerged soon after the deaths of Wagner and Brahms as the most important living German composer. During an artistic career which spanned nearly eight decades, he composed in virtually all musical genres, but became best known for his tone poems (composed during the closing years of the 19th century) and his operas (from the early decades of the 20th). Coming of age as a composer at a time when the duality of bourgeois and artist had become increasingly problematic, Strauss negotiated the worlds of art and society with a remarkable combination of candour and irony. Averse to the metaphysics of Wagner and indifferent to Mahler's philosophical intentions in music, he exploited instead the paradoxes, inconsistencies and potential profundities to be found in modern, everyday life. The new possibilities he envisioned for music were exemplified in the eclecticism of the opera Der Rosenkavalier, whose juxtaposition of contemporary with intentionally anachronistic elements creates a stylistic pluralism that adumbrates subsequent experimentation of the later 20th century.