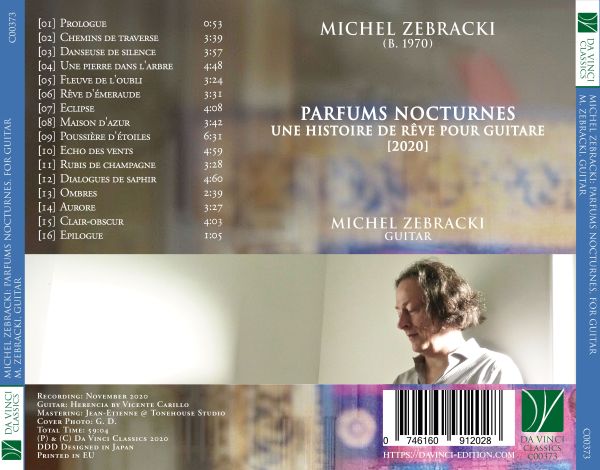 Poetic art, or a few keys…

Michel Zebracki: An eclectic guitarist, Michel Zebracki has a passion for music without borders, travelling in space as well as in time of Sound...

He began learning the instrument at the Conservatory of Jelenia Gora (Poland), then came to France to continue his education. After studying guitar with Yannick Robert, orchestration and arrangement at the Centre d'Information Musicale (CIM) in Paris, he attended numerous masterclasses with musicians such as David Liebman.
His taste, which is impossible to distinguish between ancient and modern music, combined with a background in improvised music (Alka Quartet), leads him to perform with ensembles revisiting historically inspired programmes.

In September 2009, he founded the trio Des Ayres, with Clémence Grégoire on traverso (baroque flute) and Xavier Epiard on zarb (Iranian percussion), playing his own compositions often drawn from early music. The group will release its eponymous album "Des Ayres" (Caprice Baroque DA003) in September 2014. Finalist in several competitions, the trio was awarded the Grand Prix du Public in Lille in June 2013. The original repertoire, tailor-made for the trio, and which could be described as Neobaroque, with its intense sobriety style, is the fruit of a deep imagination of a sound "pre-Babel " .
Ensemble Rosaces founded in 2015 (Cd C00165 "Aurora Consurgens" released by Da Vinci Classics in 2019) revisits the Ars Subtilior by Matteo da Perugia, this Italian composer at the crossroads of the late Middle Ages and the first Renaissance, with Gayané Doneyan (recorder) and Alice Khayati (voice). The trio proposes a musical creation with "great contamination between early music and jazz", as Edmondo Philippini, musicologist and director of the label, explains. When the album was released in April 2019, the Italian magazine Musica awarded it 3 stars, a programme on Radio Aligre was dedicated to it, and many concerts followed, including in Versailles and at the Dijon Museum of Beaux Arts.

His new project, second for the Da Vinci Label, is a cycle of Nocturnes composed for solo guitar. Some of the older pieces have already been played in concert, notably at the Festival 16 Arts (Paris) in 2018 & 2019, and are being added to a number of much more recent pieces, all of Impressionist modal inspiration. Both informal and intimate, soberly sculpted in time, their dreamlike textures are a tribute to the mists and reflections of "City of Lights".
Teaching being an integral part of his artistic evolution, he devotes himself fully to it as an experienced pedagogue through guitar lessons, orchestral workshops and master classes dedicated to improvisation, within the different associative structures and Conservatories of the Paris region.