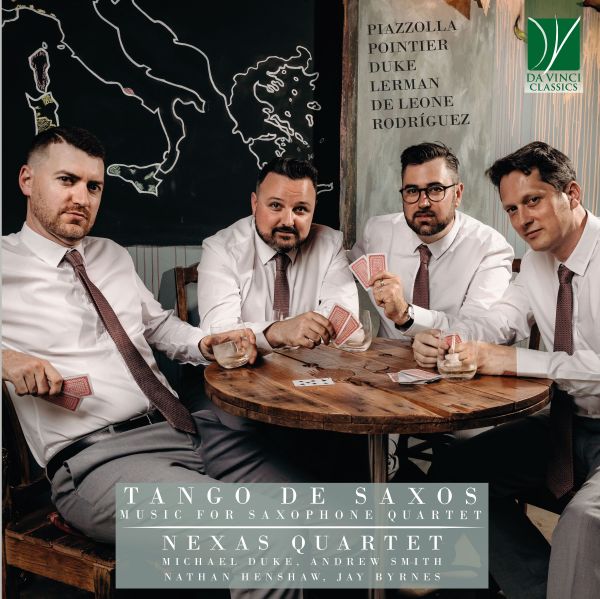 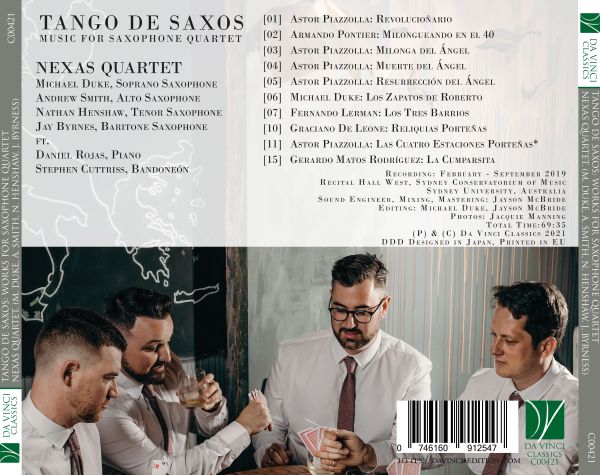 For decades saxophonists have sought to explore the multitude of Latin American musical traditions, with a particular fondness for the Argentinian Tango. The poetic nature of this music, its rhythmic drive and melancholic melody are a perfect fit for the flexibility and lyricism of the saxophone.
The saxophone quartet is a powerhouse of a medium with its ability to bring individual characters into a homogeneous ensemble akin to an orchestra while still reflecting the unique voices within it. This makes it the ideal ensemble for such nostalgic and impassioned music.
Revoluçionario (1974)
Arr. Jay Byrnes

Perhaps the most universally famous exponent of Argentine tango music, Astor Piazzolla both reinvented and reinvigorated the genre. Combining elements of traditional tango music with the counterpoint of Bach and the harmonies and rhythms of modern jazz Piazzolla forged a new sound and style that became a leading force in a movement known as “Nuevo Tango” or New Tango. Although grounded in classical music having studied with the titans Alberto Ginastera and Nadia Boulenger, Piazzolla also had one foot firmly planted in the nightclubs of Buenos Aires. With many of his some 750 compositions written for his famed quintet, he also wrote concertos, symphonic works, operas and film scores.

Revoluçionario is a rarely heard gem from the man whose treatment of the tango was indeed revolutionary. This work is definitely a tango of the concert hall rather than of the dancefloor. It has a bombastic opening with a powerful and aggressive melody that leads to a middle section with constantly cascading semiquavers that hurtle through the air. An alto saxophone cadenza that exploits the full range of the instrument then returns us to the full bodied and gutsy nature of this exciting work.
Milongueando en El 40 (1941)
Arr. Gustavo Hunt

Born in Zárate (a province of Buenos Aires) Pontier was truly a complete musician widely celebrated as bandleader, bandoneonist and prolific composer. Milongueando en el 40 (Dancing the Milonga in the 1940’s) is a work which showcases Pontier’s compositional style and natural flair for the world of tango music. As an important part of the “Golden Age of Tango” (running from the late 1930’s through to the early 1950’s), Pontier’s compositions have become a staple of the traditional tango canon. Of this work Pontier relates a story:
“One day, a friend came to tell me that Troilo would premiere my first Tango (Milongueando in 1940). I almost got angry. I told him not to make those jokes because I didn’t like them. Troilo, for me, was so great that I didn’t seriously think about that possibility. But it was true. Things like these were one of the most beautiful things that Tango gave me.”

These works were originally written as incidental music for Alberto Rodiguez Muñoz’s play El tango del Ángel that concerns an angel who, having come down to heal the souls of a Buenos Aires slum neighbourhood, is slain in a knife fight. The fight between the devil and the angel is presented as a tango fugue in three parts: Milonga del Ángel – Dance of the Angel, Muerte del Ángel – Death of the Angel and Resurrección del Ángel – Resurrection of the Angel. The fugue elements hark back to Piazzolla’s love of Bach and are attributed to his study with Boulanger. These works are part of Piazzolla’s Angel Series that can be presented either together in a suite or individually. Around the same period he also wrote works based around the devil known as the “Diablo” series. Piazzolla, a Catholic had this to say about religion:
“I believe in a God: we ourselves are both the Devil and the God.”

In addition to being the soprano saxophonist in Nexas Quartet, Duke is Associate Professor of saxophone at the Sydney Conservatorium of Music, University of Sydney. Of this work he writes:
“The title “Robert’s Shoes” sounds much more exotic and interesting in Spanish as “Los Zapatos de Roberto”. It is my take on the Tango providing melodic features to each of the saxophones ultimately culminating in one last passionate and virtuosic flourish. Roberto has very strong opinions about his shoes as he proudly struts and dances around the nightclub with much self-impressed bravado.”

Born in Buenos Aires in 1968, Fernando Lerman is a highly active performer (saxophone and flute), composer and educator teaching in the Manuel de Falla Conservatory and in the Department of Musical Arts of the National University of Arts in Argentina. De Los Tres Barrios was commissioned by the Nexas Quartet for this project. Lerman says of his work:
“According to the maps, the house where I’ve been living for 25 years, belongs to three different neighbourhoods. This funny situation led me to write three different pieces, one for each neighbourhood. “Caballito” is overcrowded and changing. “La Paternal”, which refers to paternity in spanish, is a “tango canción” dedicated to my father. I picture “Villa Mitre” as the most jolly of them all, that’s why I used the Milonga rhythm.”

Originally a guitarist and known to friends and fellow musicians as “Liendre” (nit), Graciano De Leone went on to have a highly successful career as bandoneonist, bandleader and composer throughout Argentina. First recorded in 1938 by Francisco Canaro y su Orquesta Típica, the title refers to relics of the port city Buenos Aires.These port areas of Buenos Aires were the birthplace of traditional tangos. A composer of tangos, waltzes, rancheras, and pasodobles, this Milogna of De Leone’s has become a staple of the traditional classical tango repertoire for musicians and dancers.

Las Cuatro Estaciones Porteñas translates in English as ‘The Four Seasons of Buenos Aires’. Originally scored for the instruments of his signature quintet (bandoneon, piano, electric guitar, violin and double bass), the four movements from this suite were not conceptualised as one work, but rather as separate entities. It was not until other ensembles arranged these works for their own various instrumentations presenting them as a group that the parallels and illusions to Vivaldi’s famous Four Seasons were drawn and that Piazzolla himself played them together as a suite. The work incorporates glimpses of traditional tangos juxtaposed with harsh dissonances, driving syncopations and thrilling virtuosity. In this new adaptation Nexas Quartet is joined by pianist Daniel Rojas and bandoenist Stephen Cuttriss to provide a sonic bridge to the streets of Buenos Aires.

Son of a local cabaret owner, Rodriguez (also known as Becho) was born in Montevideo, Uruguay. La Cumparsita (the Little Parade) is the quintessential tango written over 100 years ago in 1916. Initially composed as a march, it was orchestra leader Roberto Firpo that turned it into a tango adding sections of his own compositions to it as well as a some of the song “Miserere” by Giuseppe Verdi from the opera Il Trovatore. Gerardo Matos Rodriguez spent more than two decades in the courts fighting for the rights of this work and eventually won, receiving 80% of royalties.
Since it’s debut performance La Cumparsita has travelled the globe and been arranged into over 2700 versions. So special is its place in the music that there is even a “La Cumparsita” Tango Museum standing on the spot where the work was first performed in Montevideo. There is a common tradition for La Cumparsita to be played as the last dance of the evening, and so will end our Tango des Saxos recording.

Nexas Quartet: Formed in 2002, Nexas Quartet are focused on promoting the musical diversity of the saxophone, showcasing its versatility and ability to cross genres. The group’s success comes from a combination of personalities, virtuosic saxophone skills, and an ability to program concerts of a wide appeal that has seen the musicians perform in a multitude of settings. This unique approach has enabled Nexas Quartet to perform works throughout Australia and internationally, ranging from transcriptions, standard and contemporary repertoire, to collaborations with theatre companies and premiering new commissions. At the forefront of chamber music, Nexas Quartet are leaders in promoting existing and creating new repertoire for the saxophone quartet.

Over the last couple of years the quartet has developed an ongoing collaboration with opera star Peter Coleman-Wright. This has been highlighted by the recording ‘Ballads of a Pleasant Life’ for ABC Classics. This collaboration also resulted in the show ‘Composers in Exile’ described thus by Bill Stephens for Arts Review: ‘the brilliance of the five performers, their easy charm and obvious affection and enthusiasm for the material, proved a seductive combination in a presentation which informed the mind while pleasuring the soul’.
This collaboration has been presented numerous times including at the Adelaide Cabaret Festival, The Concourse (Chatswood), Glenn Street Theatre (Canberra), Independent Theatre (North Sydney), and the Camelot Lounge (Marrickville).

The Nexas Quartet has always held the creation of new music as one of their prerogatives. This was exemplified by the 2016 release of their debut album ‘Current’, a reflection of their collaboration with leading Australian composers. The recording described by Stephanie Eslake for Limelight as ‘a riveting release’ contains works by Kats-Chernin, Hindson, Skipworth, Rojas and Orlovich. Nexas has continued to commission and perform new works as exemplified by the 2017 premiere of Jodie Blackshaw’s concerto “Catango 5’ for saxophone quartet and wind band, and in 2018 Mark Oliveiro’s ‘Mega Vignettes’ (Extended Play New Music Festival - City Recital Hall). Other examples of collaborating with Australian composers include Drew Crawford on the Melbourne Theatre Company’s production of Jumpy as well as the 2015 world premiere of Matthew Hindson and Cyrus Meurant’s Romeo and Juliet with the National College of Dance.

2021 sees Nexas presenting the Australian premiere of Elena Kats-Chernin’s “Five Chapters'' with the Willoughby Symphony, performances at the Orange Chamber Music Festival and Blackheath Chamber Music Festival amongst others. The release of their latest album “Tango des Saxos'' celebrates both the music of tango and the centenary of its greatest composer Astor Piazzolla.