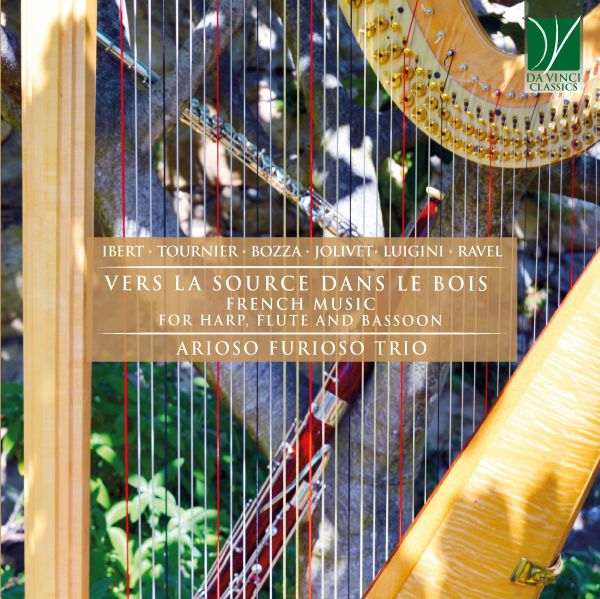 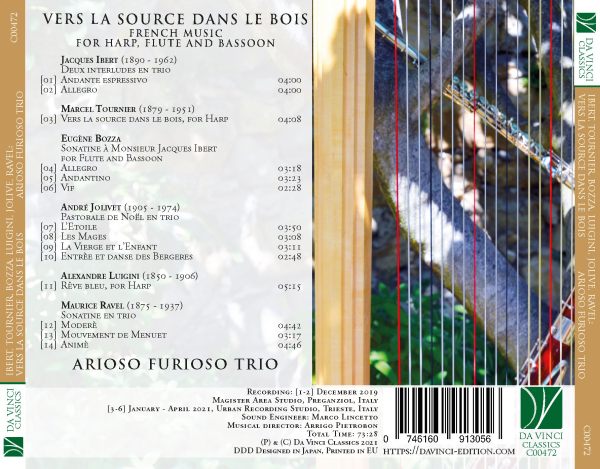 A subtle thread weaves through the pieces that make up this elegant record. This thread evokes a particular view of music, perhaps even of human nature, from which echoes the name of the ensemble that performs these pieces, the Ariosofuriosotrio. This dual concept, evoking tradition – the formal composure of an aria – on the one hand, and renewal – the (re)creative fire of fury – on the other, a metaphor for an existential (as well as social and cultural) condition, guides the listener in this unusual journey into French music, following an equally unusual trio: flute, bassoon, and harp.
The paradigmatic and the syntagmatic axes, to quote Jakobson, or the style and the idea, to quote Schoenberg, are entwined in the musical gestures of the composers selected, and they weave a thread that leads from the end of the eighteenth century to the start of the new millennium. Starting, in reverse chronological order, with Eugène Bozza (1905-1991), perhaps the least well known of the authors in this record: after studying violin performance under Lucien Capet at the Paris Conservatoire and becoming first violin of the Pasdeloup orchestra, he had a brilliant international career as a soloist in the Twenties which he decided to interrupt in 1930 to focus exclusively on composing. His music displays a typically French inclination towards elegance and grace, and also strongly idiomatic writing for woodwinds and brass instruments, which pairs melodic flow and structural transparency to a clear pathos in timbre, highlighted – like in this Sonatina – by a sharp rhythmic touch and dedicated to Jacques Ibert through a clear reference, in the first movement, to Ibert’s own Concerto for Flute and Orchestra.
A synthesis that is similar in spirit, but reached almost backwards – following a pattern that is common to several twentieth century authors – is expressed in Maurice Ravel’s (1875-1937) Sonatine. This delightful piece in three parts, characterised by preciousness of timbre, harmonic softness, and classical formal order, alleviates the irreverent modernism of the early Ravel in favour of a refinement which closely echoes Bozza’s own idiosyncrasies, and already anticipates the melancholic yearning of the Tombeau de Couperin. Salzedo’s transcription highlights the limited pianistic tessitura chosen by Ravel, while the difference in timbre gives new brilliance to the restrained extension of the register, which in turn invests the triptych with unity and measure.
With Jacques Ibert (1890-1962) we enter the second half of the twentieth century, even though in his youth the composer was taught, like Ravel, by Emil Pessard. Well-known for the scores he composed for film and theatre pieces, Ibert engraved the first side of the coin of French music in the twentieth century. The other side is represented by his near-exact contemporary Jolivet (1905-1974): with these two authors the initial dual concept expands into the two opposite poles of an entire generation that was inevitably marked by the experimentations of the interwar avant-gardes. These experimentations are approached by both Ibert and Jolivet through an assimilation which, while syntagmatic, is governed by a common paradigm. “Contemporary music should not be limited to vain combinations of timbres and sounds, or relinquish its position as an expressive artform in favour of becoming the mere result of scientific research”, writes Ibert. Considered a traditionalist, tied to the exceptional character of French art, his Deux Interludes combine rigour (formal sensitivity, clarity, elegance, harmony among different parts) and personal imagination, impressionistic harmonic colours, Baroque echoes (in the first interlude) and sparkling vivacity (in the second), which the listener can’t help but associate to Ravel’s teachings.
A member of the Jeune France group alongside Messiaen, Daniel-Lesure and Baudrier, Jolivet experienced the spellbinding effect of Edgare Varese’s influence – not only of his wonderful musical world, but also of his metaphysical, symbolic, and esoteric views. “Music is not a matter of cadences or sonata form, but of magic and spells”, writes Jolivet: essentially the same expressive drive found in Ibert, but declined according to an entirely different sensitivity. But even Jolivet the sorcerer, who believed in the existence of vibrations generated by invisible fluids present in all manifestations of life (and therefore also in music, which has the magical power to unite the human and the divine), rediscovered – once again backwards – styles and forms of the French renaissance. His Pastorale de Noël, originally written for radio, is a small and simple suite, a delightful artefact, worthy of being displayed alongside the precious artistic objects of eighteenth-century grand gout.
Luigi Radassao © 2021

It was the eighth of september 2006 when I was approached by a smartly dressed and bright lady at the end of a recital I had just given by Garda Lake. She introduced herself as Caline Tardieu’s granddaughter, Alexandre Luigini’s daughter. Her enthusiasm for the refined choise I had made of the pieces I played during my performance led her to give me a short unpublished collection by G. Tailleferre, written for Caline Tardieu’s sight-reading classes. The student of Hasselmans, member of the “ Orchestre des Concerts Lamourex”, in the early 1900s became in fact one of the most appraised harp teachers, and between 1915 and 1916 she replaced Marcel Tournier at the Conservatory of Paris, when this latter was called to arms and sent to the front. Caline soon realized that the best musicians very often come across with remarkable difficulties when reading music sheets at first sight, especially in the contemporary repertoire. Thus she decided to suggest G.Fauré-who was the director of the Conservator yat the time-a sight-reading course which he considered so essential for any musician’s education that he immediately set it up. However Caline went far beyond that: she asked the muscians she was acquainted with, such as Saint-Saens, Moskowsky, Tailleferre, Luigini and others, to compose short pieces for the students to work at. This first recording is oppurtunely combined with the piece “Vers la source dans le bois” of M. Tournier composed in 1922, with the aim to bring back to light an unpublished repertoire, belonging rightly to the history of the harp in those years when this instrument attained the height of its expression, thanks to the insight and intelligence of the people who have sometimes stayed-by chance or choice-behind the scene.

Jacques Ibert (b Paris, 15 Aug 1890; d Paris, 5 Feb 1962). French composer. His father was in the export trade, and his mother was a gifted pianist who had studied with Marmontel and Le Couppey, both teachers at the Paris Conservatoire. She used to play Chopin, Bach and Mozart, musicians for whom her son retained a particular liking. Ibert began learning the violin at the age of four, and then took piano lessons from Marie Dhéré (1867–1950), who came to occupy a special position in his life. It was through her that he was introduced to the Veber family, into which he later married. After obtaining his baccalaureat, Ibert decided to devote himself to composition, but he also had to earn a living by giving lessons, accompanying singers and writing programme notes. He became a cinema pianist and also began composing songs, some of which were published under the pseudonym William Berty. He joined Emile Pessard's harmony class at the Paris Conservatoire in 1910, went on to Gédalge's counterpoint class in 1912, and then studied composition with Paul Vidal in 1913. Gédalge was the most significant influence in his three years of training; Ibert described him as ‘an adviser, a confidant and a very good friend’. While Gédalge's teaching activities at the Conservatoire were confined to counterpoint, he also advised his pupils on orchestration and organized a private class for the best of them. It was in that class that Ibert met Honegger and Milhaud.