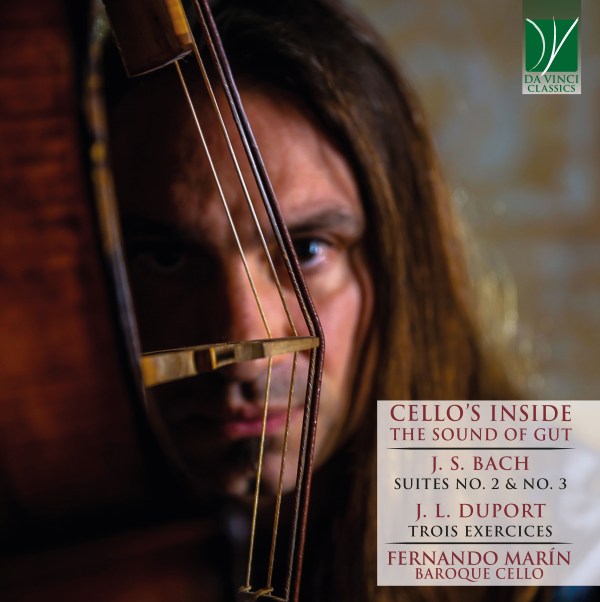 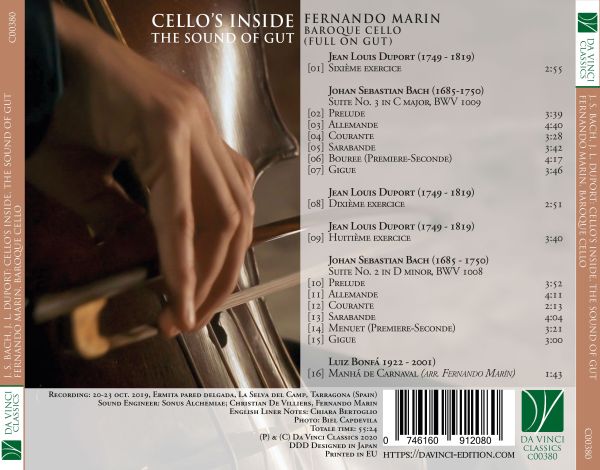 J. S. Bach, Duport: Cello’s Inside, The Sound of Gut

The horse’s mane, smeared in resin and stretched by the wooden staff of the bow, sink gently scraping the dry animal intestines, twisted and tense, in a similar way that the hairs of a paintbrush sink caressing the oil-based paste of valuable pigment on a Renaissance canvas, or the tempered edge of a gouge, cleaving softly the noble wood of a carving. For just a brief moment – filling the atmosphere with subtle waves like those of a dry leaf that falls on the calm waters of a pond – the delicate strokes, crackles and whistles become sounds, voices and chants in an amalgam of timbres, tones, colors, lights and shadows, volumes, depths and brightness that, as in painting and sculpture, seem to come alive reincarnating and animating gestures, affections, expressions, faces, spirits and characters from a bygone era.
(F.M.)

The Essence of Aesthetic
The essence of the sound of early music, regarding stringed instruments, resides in the sound of the gut strings: the material of which they are made, especially in the Renaissance and the Baroque. The suggestive sonic universe that is created is conditioned by the acoustical properties of said material.

The aesthetics of the sound of these times necessarily depends on the images and the concepts created by the artist’s language, materials and techniques. Studying and understanding the music of the Renaissance and the Baroque requires full immersion in the language, techniques and the way of thinking and imagining of the Art of that time, where painting and sculpture signifies invaluable inspiration.

At that time, the language and resources of Art transcended the aesthetic end and expression became second nature, sometimes more real than reality itself; as in the case of the details of a Jan Van Eyck’s painting that, with pictorial techniques, surpasses the realism of authentic materials imitating gold, reflections, tissues, tears …
In this sense, for example, the lowest gut strings of the instrument is vital when it comes to generating depth, chiaroscuro, volumes, smoothness and purity due to the natural characteristics of its harmonic spectrum and its influence on the other strings by way of its fundamental. Therefore, the instrument used for this recording is strung entirely with natural gut strings, including the lowest strings. In this recording, in addition, we have developed to the maximum extent, musical and audio engineering techniques in order to imitate this expressive spirit of the Renaissance and Baroque artist, creating an intimate and detailed perspective with the power of expression as the main component based on the strength of detail. This musical interpretation is comprised of elements of articulation, phrasing and expressive range based on the language of the rhetoric and the affects of the time period.

About The Sound of Gut Strings
The strings of early bowed instruments were made exclusively of animal gut. They constitute a crucial factor in their sound production. According to all known historical sources, such strings were made from ovine’s gut, washed, twisted and allowed to dry:

There were at least three different types of strings made of different types of gut (specific animal, age, provenance, twisting techniques, etc.): one was used specifically for the upper register, one for the middle and the other for the bass (the latter being of old ram’s gut), depending on their properties of elasticity and rigidity. The instruments were carefully and painstakingly strung for optimum relative performance in all registers, denoting special attention to criteria such as homogeneity, harmony and proportion.
At the roman Archivio di stato, dating from 1677, we can found evidences of the use of thick pure gut strings for the lowest fourth course of the violin (…et anco bassi grossi per quarte di violin). The sound of these gut strings for the low register is deeper, pure and rich in fundamental harmonics.

Gut strings are –due to the properties of the material of which they were made- probably the least that adulterate the natural sound of the wooden soundboard and resonance box of early bowed instruments, whose thicknesses and structural characteristics were originally designed to function with said gut strings thus optimizing their performance. These organic materials (woods, glues, gut strings …) react to vibratory excitation in a different way than artificial materials, occasionally producing interesting properties emerging at a critical point where they achieve their highest performance. In addition, these organic materials are always changing, evolving and adapting to environmental conditions, which makes their acoustical response more stable. Moreover, this acoustical response is most suitable to the essence of the music of that period in aspects such as sound volume –with bass and high registers balanced in specific function relative to the whole of the mass of sound and not as an independent entity in and of its own– harmony, articulation, color or nuance of sound.

There is no musical instrument more perfect than the human voice, therefore the ancients used it as a model to be imitated, the same holds true with early bowed instruments. Vocal cords are a cartilaginous organic material based on collagen, akin to that found in gut.

The intervention of modern materials (plastic, metal wound, etc.) in the production of strings supposes an intentional attempt to adapt, or supposedly improve, the function of this sonorous substance to modern aesthetic psychology. This aesthetic differs from that of what the ancients conceived, which included an alchemical and spiritual component attributed to living materials. Early bowed instruments with plastic strings (or metal wound) would cease to be an organically alive instrument that tries to imitate the song of the human voice.

Fernando Marìn: Originally from Alicante, the reputable gambist and cellist Fernando Marín has specialized in bowed instruments of the Renaissance and Baroque periods, historical interpretation and chamber music, receiving a Ph. D in musicology. He has researched the origins, methods of playing and repertoire of these instruments, mastering a very unique historical technique of performing on early bowed instruments and accompanying the voice in his duo Cantar alla Viola, with which has recorded several CDs: The Complete Polyphonic Works of Juan Blas de Castro (1561-1631), Robert Jones: The Second Booke of Songs and Ayres (1601), The Vihuela de arco in the reign of Aragon, Each Lovely Grace, The second booke of Ayres de William Corkine (1612), or Segretti Acenti, and with the trio Viola da Samba, recorded the CD De río a Rio in 2015. In addition, he has released 4 interesting solo CDs: eVIOLution, sCORDAtura, The Art of the Vihuela de Arco y Magia consoni et dissoni. He produces and supervise hes own recordings and since 2017 he works together with Chris P. De Villiers en Sonus Alchemiae. In 2017 he won the Leonardo Grant for Researchers and Cultural Creators of the BBVA Foundation with the project Recuperación de las vihuelas de arco renacentistas y su interpretación musical. He is currently, and since 2003 the Viola da Gamba teacher at the Conservatorio Profesional de Música in Zaragoza.